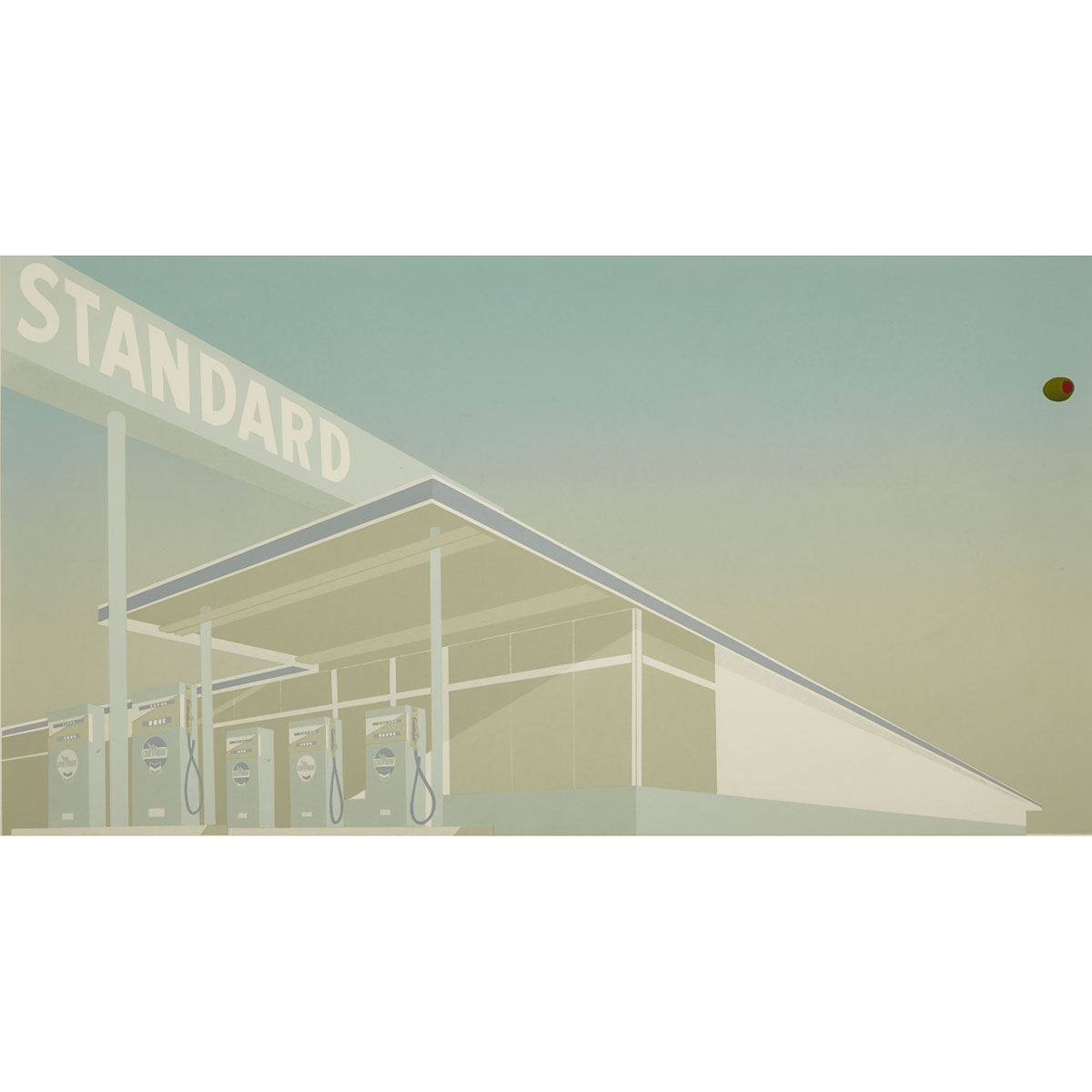 “In Ruscha’s Cheese Mold Standard with Olive, a lone gasoline station rises against a turquoise and seafoam-green sky.  A large sign identifies it as one of the many Standard Oil facilities then scattered throughout the United States. Viewed from a low vantage point, the building appears monumental, its sharply angled roof receding dramatically toward the horizon. Empty save a single olive hovering in the sky at upper right, the background evokes the wide-open spaces of the American West. […]” Susan Dackerman.

Ruscha made several different prints featuring the Standard station motif in 1969. The idea emanated from Ruscha’s gelatin silver photographs Standard, Amarillo, Texas, 1962; and Standard, Figueroa Street, Los Angeles, 1962 and his painting of a year later, Standard Station, Amarillo, Texas measuring 64 1/2” x 121 3/4”. For each edition of the prints, including this lot dated 1969, Ruscha experimented with different colours, while he maintained the same composition and blended skies.

Ed Ruscha (pronounced roo-SHAY) is an American artist whose oeuvre melds Pop Art iconography with the documentarian rigor of Conceptual Art. With a practice that spans drawing, painting, photography, film, printmaking, and publishing, Ruscha’s background as a graphic designer is evident in his subtle use of typography. He is perhaps best known for his artist’s books, such as Twentysix Gasoline Stations (1963), as well as his word paintings which skew the meaning of each word through color, background, and font. “I like the idea of a word becoming a picture, almost leaving its body, then coming back and becoming a word again,” he said of his inspiration.

Born on December 16, 1937 in Omaha, NE, he grew up in Oklahoma City before moving to Los Angeles to study art at the Chouinard Institute (now the California Institute of the Arts). Deeply influenced by the culture and atmosphere of Southern California, Los Angeles as a place proved to be a consistent wellspring for Ruscha’s imagination. In 2016, he was the subject of a sprawling exhibition at the de Young Museum in San Francisco, titled “Ed Ruscha and the Great American West,” it included 99 works which dealt with America’s captivation with the western landscape and manifest destiny. The artist’s works are held in the collections of The Museum of Modern Art in New York, the National Gallery of Art in Washington, D.C., the Tate Gallery in London, the Los Angeles County Museum of Art, and the Walker Art Center in Minneapolis. He continues to live and work in Los Angeles, CA. 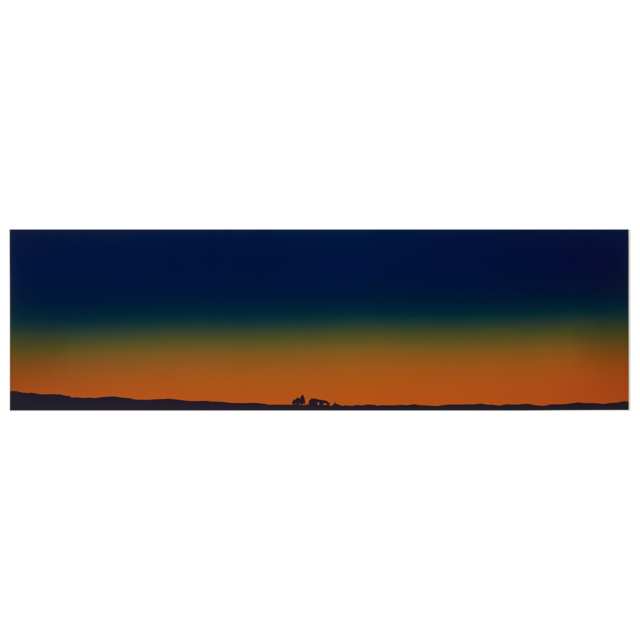 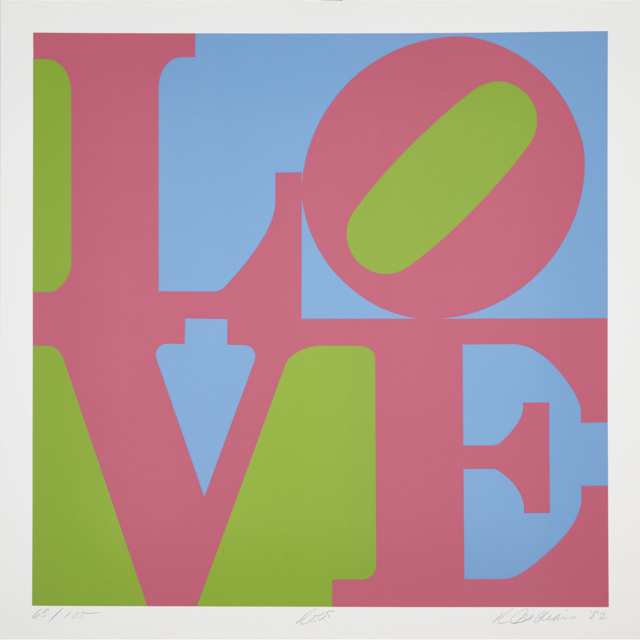 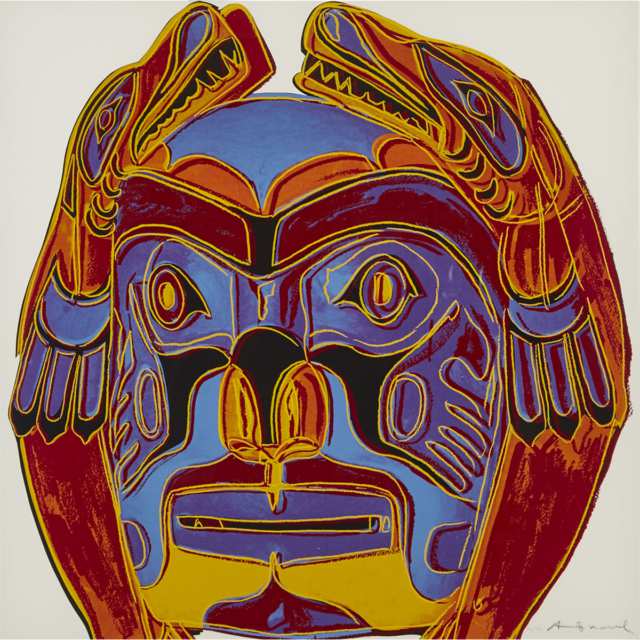 Colour silkscreen on Lenox Museum Board with the blindstamp of the printer Rupert Jasen Smith, New York lower left; signed by Warhol in black crayon and numbered AP 10/50 in pencil. Published by Gaultney Kilneman Art Inc., New York, New York. Aside from the edition of 250.
Sheet 36" x 36" — 91.4 x 91.4 cm. 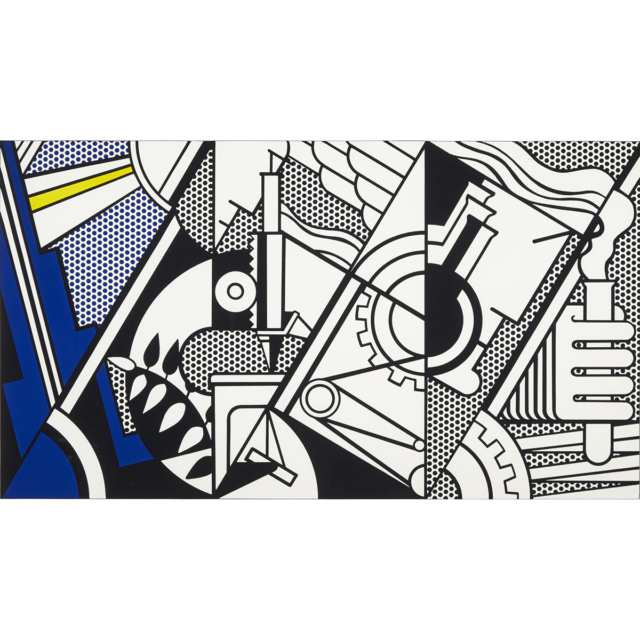