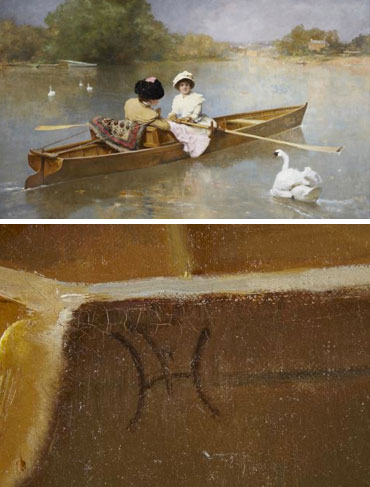 A family based in Waterloo, Ontario, who had enjoyed the painting for many years but had never known the identity of the artist, brought “Rowing on the Seine” to Waddington’s. It had been in their family several generations, passed down by descent from the private collection of Helen Cox of Detroit, Michigan, and then to relatives in Toronto.

Waddington’s International Art specialist Susan Robertson admired the finely painted 19th Century School upon first sight, attributing the identity of the artist to be American given its provenance. The precise brushwork brought to mind William Merritt Chase and the composition akin to Thomas Eakins, particularly the alignment of the rowboat that echoes his famed rowing sculls, as in the painting “The Champion Single Sculls” (1781). Other characteristics, such as the luminosity of the colouring, the architectural style of the building in the background and the Edwardian gallery label on the verso, all gave indications that this was an American School artist.

The pleasant subject matter and overall quality of the painting made it an appealing acquisition; however, within the auction world even the value of a well-painted unidentified work is limited to its decorative potential. This painting, fortunately, also featured a monogram “HF” (large H, small F inside), on the stern of the boat. Never one to neglect a good mystery, Susan began her research based on this clue.

Susan’s research on the monogram brought a discovery.

This painting was not American, but French. The monogram matched the signature of Ferdinand Heilbuth (1826-1889), a German born, French naturalized citizen. Heilbuth studied with Paul Delaroche (1797-1856) and Marc-Charles-Gabriel Gleyre (1806-1874) during the 1940s in Paris. In his early career, Heilbuth painted genre scenes and Italian cardinals, as he traveled to Italy to paint throughout the 1850s and 60s.

Heilbuth submitted regularly to the Paris Salon and was highly recognized artist in his lifetime, collected by patrons in the UK, France and North America. He worked within illustrious groups of French painters, participating in 1865 in an exclusive exhibition of the cercle de l’union des arts on the rue Choiseul with Delacroix, Decamps, Diaz, Troyon, Messionier, Ribot, Belly, Daubigny, Millet and Gerome.

In the 1870s Heilbuth shifted away from Italian themes and began to paint more modern Parisian subjects. “Rowing on the Seine” epitomizes the Impressionist preoccupation of depicting scenes of upper middle class leisure. Parisians relaxing along the banks of the Seine were typical of French artists during the 1870s, when the increasing convenience of rail travel boosted the rise of new leisure culture perhaps depicted most famously by Eduoard Manet, whose influence on Heilbuth’s career should not be underestimated. Heilbuth and Manet maintained a friendship from the early 1870s. It is during this time that Heilbuth began to paint such modern themes, quite possibly at the urging of Manet. Such pleasing scenes of leisure and the good life were eagerly collected, both in France and abroad. Heilbuth was an important painter of his time and helped to define 19th Century French painting along with his contemporaries Van Gogh (1853-1890), Cezanne (1839-1906) and Manet (1832-1883).

Ferdinand Heilbuth’s work has been exhibited at the Boston Antheneum and at the Grosvenor Gallery in London on a total of seventeen occasions. His works are found in the collections of many institutions including the Musee d’Orsay, Musee du Louvre, Musee des Beaux-art de Bordeaux, the Wallace Collection, London, and the Hermitage in Saint Petersburg. The Hermitage has in their collection a sketch of “Rowing on the Seine”; the small panel version is reproduced on their website.