What to Buy: Inuit Art at Auction 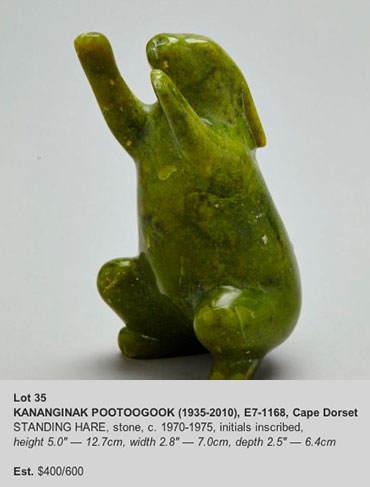 Christa Ouimet answers: Where do I start? What should I buy?

In about a week from now, Waddington’s will once again offer over 300 works of Important Inuit art to the world. It is amazing to think that Waddington’s fall auction is now a 35 year tradition; making it an institution in the world of collecting.

Many of you who are new to collecting have asked me: Where do I start? What should I buy?

New collectors are often intimidated about their level of knowledge about this exciting art form. My consistent message to all of you is collect what you love. When you walk around our gallery, or flip through our catalogue, what piece do you keep returning to? What have you kept thinking about for days after you first laid eyes on it? If you follow this approach, you truly cannot go wrong.

One of many things that distinguishes Inuit art from other art forms is the diversity inherent in the art created across the Canadian Arctic. Just look at a typical work from Gjoa Haven with its wildly expressive faces and figural contortions and contrast it with one created in Cape Dorset where sculpture is often gracefully refined depictions of a caribou or owl for example. Diversity is also reflected in the wide range of prices achieved in Inuit art. This upcoming auction features pieces valued from $200 to $30,000. It is an art form that is accessible to every level of collector, from the novice to the experienced.

What’s more, is that these attainably priced pieces are of no less significance than their higher priced counterparts. It is often the highlight results that are publicized after the auctions, and many people are led to believe that Inuit art is “out of their league”. But at Waddington’s, we have always had an affinity for the “diamond in the rough”, the little gem that is sometimes overlooked by mainstream buyers or overshadowed by big name artists. In an attempt to highlight the smaller pieces that often come with a lower estimate, we began referring to them as Small Wonders, and during our previews we exhibit them on custom made miniature pedestals. During our viewing this weekend, I urge you to take a moment to savour the uniqueness of each of these pieces.

For your convenience we offer phone bidding & absentee bids. As well as online bidding through Artfact.