Presenting Canadian Works that are Fresh to the Market 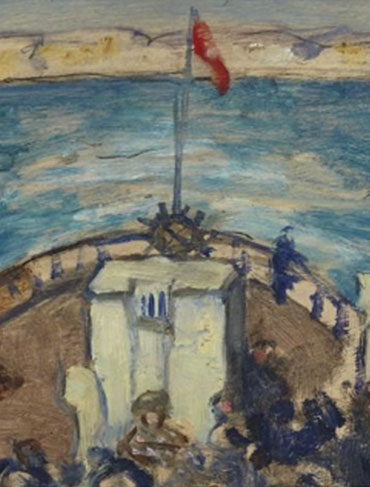 Waddington’s Auction of Canadian Fine Art on Monday, November 21 will make collectors stop, look twice, and maybe even feel as though their life has changed. That’s the goal of Linda Rodeck, Waddington’s Senior Canadian Art Specialist.

This fall’s auction includes 128 works that are fresh to the market, a preoccupation of Rodeck and her team, whom she refers to as ‘part art specialists and part sleuths’.

Waddington’s Canadian Art team are in fact building a reputation for offering works that have not been already passed around the art market. Prime example is The Crossing by James Wilson Morrice, R.C.A. Rodeck notes that examples of Morrice’s best work have become increasingly difficult for collectors to acquire, with the recent large gift of 50 of the artist’s works to the National Gallery of Canada, added to the previous Laing Collection gift which included over 75 works, as well as a further group of Morrice sketches donated to the Art Gallery of Ontario. As a result, few oil sketches of this calibre remain on the open market, making The Crossing one of the highlights of the Canadian auction season.

While the investment value of a work of art has become increasingly part of the dialogue at art fairs and auction previews – and is not lost on Rodeck – her interest and that of her team and the broader specialist community at Waddington’s is piqued by the exceptional and marvelous at any price level.  “We are motivated to locate consignments that will make our buyers stop, look twice, and feel as though their life has changed, even if only a little. I’m not after the stratospheric sticker prices alone and while I like selling valuable paintings as much as the next person, I want to sell quality at any price level.”

To further demonstrate her philosophy, Rodeck refers to an Econ 101 class lesson of “in search of a greater fool”. Rodeck reminds us that the “greater fool” theory states that the price of an object is determined not by its intrinsic value, but by the irrational beliefs of market participants. Simply put, one may pay a price that seems “foolishly” high because one may rationally expect that the item can be resold to a “greater fool” later. Rodeck continues, “We have seen a lot of this lately with the same works being passed back and forth, each new “investor” wanting his or her ten-point mark up, and PDQ! Inevitably, however, someone gets caught holding the hot ‘art’ potato.”

Admittedly, sourcing fresh works is a harder row to hoe but it’s particularly important in an age when everyone can check out what something last traded for with a few key strokes. Rodeck concludes, “I think it’s more gratifying for our collectors and for us to find fresh works for their consideration and it fits the ethos of Waddington’s, which is an auction house that celebrates originality and creativity.”

A selection of favourites which Rodeck and her team of “sleuths” have brought onto the market this season include:

About Waddington’s
Waddington’s is the Canada’s most diversified provider of auction and appraisal services.  Waddington’s offers live and online auctions of fine art and collectibles across a broad spectrum of markets, including Asian, Canadian, Inuit and First Nations, International and Contemporary art, as well as Decorative Arts, Jewellery and Fine Wine & Spirits.