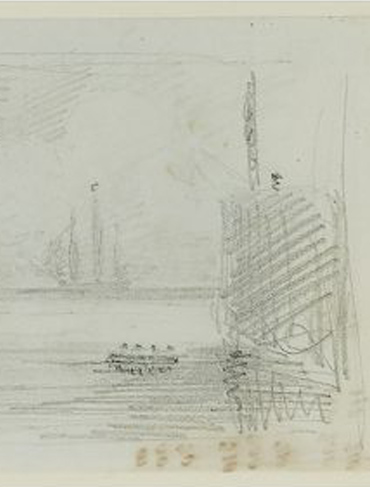 We are delighted to include two important collections of British and European drawings, ranging from the 17th to 19th centuries. Highlights of this are two small pencil works: in a John Constable harbour scene (lot 812 – seen on the right) sails and waves seem to flutter under the hurriedly sketched linework (similar sketchbook drawings by Constable are considered highly desirable as the artist was aboard the ship — and only some 50 sketches survived the trip); while a study of jockeys by Edgar Degas (lot 920) conveys a sparse and kinetic dynamism.

Portraits continue to be a prominent theme, and there are some fantastic examples in this year’s offering. A 17th century Old Master painting of Mary Magdalene (lot 934) depicts quiet piety in a shed tear, while a historic portrait from the Ferrar family (lot 933) is a highly finished and reverential portrayal of a matriarch with her son. British artist Harold Francis Riley presents a series of portraits, including a series of intimate drawings of his family and friends; an painting of a nun (lot 833) is evocatively portrayed in expressive brushstrokes.

Five oils by British painter Edward Seago, including an apprehensive and moody depiction of barges waiting for the tide (lot 871) that comes to us from the collection of H.C. Walker, the son of Sir Edmund Walker. Modern works are boldly presented as well: highlights include an ink study by Lynn Chadwick (lot 835), produced by the artist during his time in residence at OCAD in Toronto in the 1960s, while a hypnotic canvas by Yvaral (lot 897) masterfully commands the wall with its bold geometries.

From old to new, this auction offers fine examples for every collector.