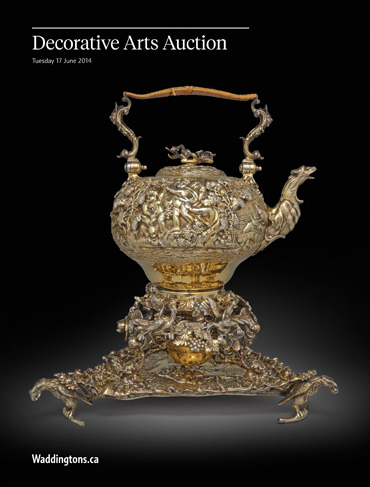 By definition, decorative art is art that is meant to be useful as well as beautiful. Throughout the ages skilled artists have turned the most common objects into things of beauty – to be prized for both their utility and aesthetic quality.

Waddington’s Spring Auction of Decorative Arts is filled with such wondrous items. From Frank Gehry’s architectural ‘fish lamp’ to stylish Russian Imperial vodka cups and regal George II silver candlesticks, this auction includes decorative arts from across Europe, Russia, Canada and the United States from the 16th to the 20th century.

Certainly a highlight of the auction, Gehry’s ‘fish lamp’ has a fascinating backstory. Gehry was commissioned by the Formica Group to design something to promote a new product. The story goes that while working with the product in his studio, Gehry dropped a piece and the resulting scale-like shards spawned his series of ‘fish lamps’. Another highlight, at the other end of the design spectrum, is the exquisitely ornate George III silver-gilt tea kettle by Edward Farrell, adorned with putti harvesting grapes, exotic birds and beasts, a tiger pursued by hounds, and much, much more, all resting upon three perched eagle and prey feet.

We are also pleased to offer 12 extraordinary chess sets from the same Montreal collection that was featured in our December 2013 auction. Primarily from the 19th century, the Anglo-Indian, Swiss, Russian, French and Chinese highly-carved chess sets depict everything from the English/Chinese opium wars to the Turks fighting the Romans.

This auction is filled with much to admire, as we found during the months of our consignment and cataloguing process, but the gorgeous “Stella” by Maurice Guiraud-Rivière has been one of everyone’s favourites, particularly during our Spring Auction Highlight preview. A graceful, silvered-bronze nude, Stella will join several other bronze figures on the auction podium.

Decorative Arts enthusiasts are cut from the same cloth. We love the artistry, design and style, and attention to detail is our hallmark. This catalogue has been created with as much care as we handle the finest porcelain and most fragile glass. We trust we will find within its pages something to inspire you.