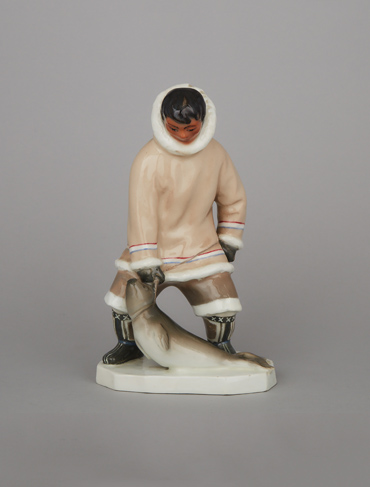 Excerpts from a Profile of Leo Mol by Free Press reporter Alison Mayes for the book The Greatest Manitobans.

When Leo Mol was fleeing Europe in the wake of the Second World War, immigration authorities told him Canada didn’t need artists. It needed farm labourers. So the 33-year-old Ukrainian sculptor who had been classically trained at art academies arrived in January, 1949 at a frozen grain farm near Prince Albert, Sask.

He and his wife Margareth had $70 to their names. He didn’t speak English.

There was nothing to do on the farm except wait for spring. But Mol couldn’t stand to be idle. He set out for the nearest big city, Winnipeg. He got off the train and started trudging along Main Street.

Eventually, the short man with blue eyes and a broad face happened upon a store, Providence Church Goods, with plaster religious figures in its window. Venturing inside, he discovered that the shop owner was Ukrainian and – was it providence? – needed someone to paint church murals. From that humble start, Mol forged a prolific art career in the city that became his home.

“He’s probably one of the most determined people I’ve ever met,” says Elise Swerhone, director of the 1993 documentary Leo Mol: In Light and Shadow. “Even at 80, he was still full of ideas. He had a whole slate of things that he wanted to accomplish.” Mol’s work ethic is legendary. “He was like a man on a mission,” says David Loch, Mol’s longtime dealer. “The creative juices were unbelievable.”

Mol always said his elegant works could speak for themselves. They are accessible to everyone in parks, public spaces and churches. He had no children, but has left a legacy in bronze and stained glass. His sculpture of pioneer bush pilot Tom Lamb, which shows the parka-clad aviator reaching to spin a propeller, has become an iconic image of Manitoban tenacity and spirit. Loch calls it his masterpiece. Mol kept a personal copy of almost every piece he created. In 1990, he donated his entire collection of more than 300 bronzes, paintings, terra cottas and other works – valued at $4 million – to the city of Winnipeg, on the condition that it create an appropriate setting.

Mol took pride in his rigorous old-school training and had no use for abstract contemporary art, or any artistic trend. “I never want to be a fashion,” he once said. He revered the classical Greek and Roman sculptors and believed most ordinary people prefer art in a realistic style. No one denied Mol’s superb craftsmanship, nor his skill at creating sensitive, life-like three-dimensional portraits. But the visual art establishment, always preoccupied with boundary-pushing, had little time for Mol. “He felt snubbed by the art community in Canada,” recalls Swerhone.

“Sometimes I feel a little bit like an outcast,” Mol said in an interview when the Winnipeg Art Gallery held a Mol retrospective in 1974. “(But) art is serving the community in a spiritual form…and I like to serve the silent majority.” Mol didn’t regard art as a glamorous vocation; he compared himself to a bus driver who just “did his share.” He was always interested in Canadian subjects, making ceramic figurines of curlers and square dancers in the 1950s, or putting aboriginal figures into his stained-glass windows. His idea of relaxation was going to the Whiteshell to paint.

After 13 years in Canada, Mol made his international breakthrough. He won a worldwide competition to create a towering bronze monument to Ukrainian poet-hero Taras Shevchenko for Embassy Row in Washington, D.C. The 14-foot statue’s unveiling in 1964 attracted a crowd of more than 100,000.
After that, Mol secured more prestigious commissions. He had the honour of sculpting Popes Paul VI and John Paul II from life and Pope John XXIII posthumously. He began to spend part of every year in Germany, where he had most of his bronzes cast at a foundry near Munich. A school there was named after him.

“Leo was really an international artist, but he never blew his own horn,” says Loch. He could have relocated to an art capital, but remained a committed Manitoban. “He had this loyalty to Canada and Winnipeg which was unwavering,” says Loch. “It was a city where he felt safe and was allowed to work.”
Mol always stayed in modest accommodations in Europe and lived simply at home, Loch says. “Leo was only interested in one thing: creating the work. He used to say, ‘You need a Mercedes. I don’t.’ ”

In his portraits, Mol did more than simply render a likeness. He revealed complexity of character and, as Free Press critic Randal McIlroy wrote in 1989, did not deify his subjects. “Whether the subject is Sir Winston Churchill, Taras Shevchenko or Pope John Paul II, the bronze result is noticeably, touchingly human – not a god, but a human being of noble aspiration and mortal frailty.” Mol is often described as a reserved, self-contained gentleman whose mind was always on his next sculpture. Friends say he was haunted by the trauma of his past. “He buried himself in his work,” says art collector John Crabb, who has known the artist since the 1960s.

For decades, Mol’s pre-immigration life was shrouded in mystery. In interviews he falsely claimed to be an only child, and to have trained in Vienna. Even now, little is known about his time in Berlin and Holland during the Second World War. Swerhone’s documentary revealed that Mol lived for nearly 50 years, from wartime until 1990, in fear that his family back in the Soviet Union was being persecuted because of the path his life had taken. He was afraid to contact them for fear they would pay the price. In 1990, his younger sister suddenly located him. He learned that his father and brother had died in Stalinist camps, likely for their political views. His mother had died in exile.

The tragedy of Mol’s story lends poignancy to his sculptures, especially works such as Family Group and The Pioneer Family. But to stroll through the Leo Mol Sculpture Garden in Winnipeg’s Assiniboine Park is to hear a calm voice, whispering that the world can be orderly and compassionate. “Mol may not invent new ways of seeing, but he reminds one that there is still room and need for grace, refinement and tenderness . . .,” wrote Free Press critic John W. Graham in 1977.

Above: Lot 19 in our Canada Select Art & Decorative Arts Auction – Leo Mol Porcelain Figure of an Inuk Hunter with Seal, 1953  Find out more.