In Memory of Toller Cranston 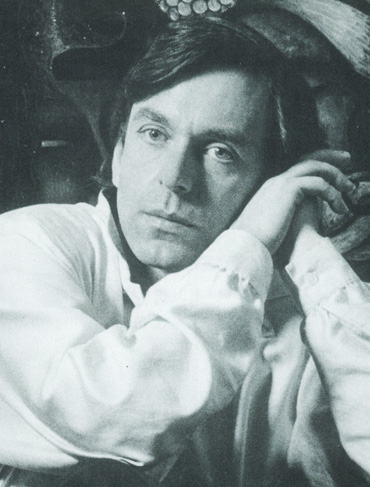 a brilliant Skater, Artist and Friend

Toller Cranston lived in a grand Victorian home on Pembroke Street in downtown Toronto in the 1980s. Waddington’s was on Queen Street East at that time – on the other side of Moss Park, a short walk away. Toller was a regular at all our auctions, which in those days included twice-weekly estate auctions offering anything and everything to be found in a home. Toller was always on the hunt for the wild, the colourful, the outrageous, the beautiful and anything over the top. His favourite expression when he saw something he had to have was: “It’s beyond the beyond!” Pieces Toller had to have included an Italian Murano green glass indoor fountain that was destined for his bay window (where it actually worked once installed); a huge black metal sculpture of a flying raven; as well as every antique, carved wood cherub he could find.

One evening, I was hanging out with Toller and Bill Kime, another friend from Waddington’s, at his home. In our conversation Toller declared that it was time for him to start selling a few pieces to help spark a change in his life. This was during a difficult period for Toller, in the twilight of his skating career, and feeling unappreciated by the art world. (I remember a large canvas he had recently painted of classically Victorian dressed skaters on a frozen outdoor pond. On a hill next to the pond, a sinister-looking tree with another skater hanging by the neck from a branch over the frozen pond. That was Toller – dramatic and dark-humoured.)

Bill suggested that the best way to sell his pieces was not a few at a time, but all at once as a big event that would generate excitement; create a buzz in Toller’s world of art and entertainment. Toller loved the theatre of big events – and he was immediately excited by the prospect. In June 1991, after many days of working closely with Toller to catalogue the collection and produce a catalogue, Waddington’s offered the contents of his three-story house over a three-session auction. Invitations to the preview party were highly sought. Fans, collectors, voyeurs and media spilled out our front doors the evening of the first auction. And as predicted, the sale of his home and its contents allowed him to “reinvent himself”. Toller bought a magnificent estate in San Miguel de Allende, Mexico’s artist colony, where many ex-pat Canadians including Leonard Brooks and Toller’s good friend Gary Slipper were already settled. A new chapter of his life.

The reality is, Toller had already reinvented himself several times – from virtuoso world-champion skater, to caustic commentator to devoted coach – Toller had pushed the limits of a restrictive sport at every leap and turn. As a painter, Toller’s work was like his artistry on ice. Graceful, sensual, provocative, at times dark, or exploding with colour and energy. Defying tradition and eschewing conformity.

Toller lived large. He craved attention and appreciation, but he also spoke the truth as he saw it – which often landed him on the wrong side of the establishment. He had a wicked sense of humour and could slay his critics with a mere word or two. Toller was brilliant. He should be honoured as one of Canada’s most remarkable creative forces for changing the Canadian landscape in so many ways. Toller was a friend. He was generous, he was fun, he was both a social animal and a solitary man, a mercurial temperament who would disappear for months and then return with bravado.

Toller will be missed. By me, by those who had the chance to enter his magical life, and everyone touched by his creative legacy.

*This photograph of Toller’s main floor living room was taken by Joy von Tiedemann and used as the auction catalogue cover. It’s a wonderfully mad room that is all Toller.