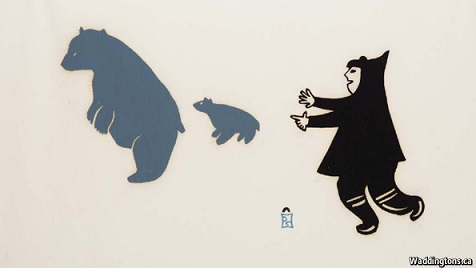 It is a truism that governments are usually bad at picking economic winners and losers. But, as with any man-made rule, there can be exceptions. The story of the Cape Dorset artist collective in the Canadian Arctic is one of them.

In the late 1950s James Houston, a Canadian federal government administrator, first encouraged the Inuit community in the area to take up printmaking. As Cape Dorset, a town of just 1,200 people, lies far above the northern tree line, printmaking was not previously a popular form of art. Houston, who was also an artist, imported supplies, set up a printmaking shop and taught the Inuit techniques he had learnt while briefly studying in Japan with Un’ichi Hiratsuka, a woodcut printmaker.

From 1959 the collective of Cape Dorset artists began releasing annual catalogued collections. Their works have since built up a small but international market. The first portfolio of 39 works—21 stone- cut, 18 sealskin stencil and two stone “rubbings”—earned the collective C$20,000. The only remaining complete first portfolio of these works has been publicly exhibited once since then, at the National Gallery of Canada in 2010 on loan from a private Canadian collector.

On May 6th, the portfolio will be auctioned by Waddington’s, an auction house in Toronto which specialises in Inuit art. It is expected to fetch C$450,000.

The Inuit artists drew inspiration from their Arctic world—polar bears swimming among ice floes, a hunter poised over a hole in the ice waiting for a seal to emerge, caribou in the dim winter light. In these early prints, the forms are simple but elegant and the colour palette is almost primary.

The publicity garnered by the 1959 catalogue helped launch Inuit art as a new artistic form in Canada. The government support for these artists was not altruistic. Following the second world war it was government policy to relocate the nomadic Inuit to settlements, usually near one of the Hudson’s Bay Company’s trading posts that the fur trader had built across the country. But having deprived the Inuit of their ability to live off the land, the government needed to find them something to do. Although Inuktitut, the local Inuit language, has no word for art —it is translated as “isumanivi”, which means “your own thoughts”, or “sanaugaq”, meaning “things made by hand”—they had a tradition of carving small stone figures as toys and decorating clothing with sealskin appliques.

It was the gift of a small carving from an Inuit in 1948 that first persuaded Houston that an art industry could be a fruitful northern venture. The enthusiasm for making art, including prints, continues today, not just in Cape Dorset but also in the wider territory of Nunavut, which has a population of 34,000. Currently, more than 10% of the population make some or all of their living from making art. The most recent government GDP figures put the art industry just behind mining (although that might say more about the current weakness of the mining industry).

Houston’s printmaking introduced a strong contemporary-art scene but stone carving, the most popular form of art, is also the oldest. The land claims agreement, which established Nunavut as a territory in 1999 and is akin to its constitution, even gives an individual Inuk the right to remove up to 50 cubic yards of carving stone per year from Crown lands without a permit.