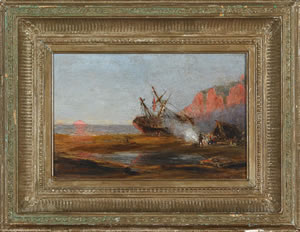 solving mysteries part of the job – and the fun

I just love my job!

Nothing makes my day better than a great painting or figuring out a signature that has stumped generations. I love to research so I feel so fulfilled when I solve the mystery.

This little painting has put me to the test. I was so excited for the consignor upon first glance. It appeared to be a signed marine scene by the great Scottish/American sea painter, Robert Salmon (1775-1844). I was even more thrilled by the old pen and ink title on the back – Wreck off the Coast of Nova Scotia.

The problem is the indistinct date (1856?) is too late for the recorded dates of the artist. In digging deeper, I found that a work of art had surfaced that was dated later than his assumed death date. To top it off, the little painting has an old catalogue entry and its illustration taped to the back from an old sale, possibly Sothbey’s based on the font type.

In my hopes that it was a Robert Salmon, in very faint pencil (which I could have missed had I not looked again in raking light) it reads either: “Painted by” or “Purchased by John Halpen in 1852”. What? — Confusing?!

I included this painting in the December 13th International Art auction based on its fine quality so others could decide for themselves – is it or isn’t it a work by the great marine painter, Robert Salmon?