Lennon’s ‘Bag One’ in Prints and Photography Auction 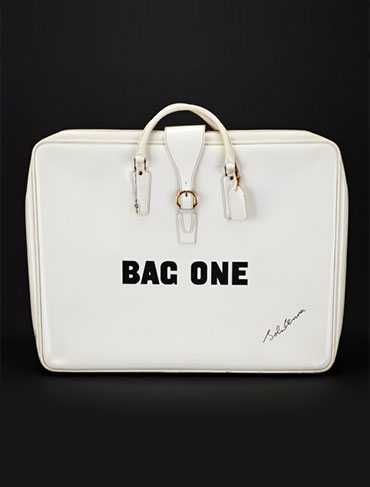 Set of Lithographs by John Lennon part of his artistic legacy

John Lennon’s legacy includes many things, from songwriter and musician to political activist, philosopher and artist. An important aspect of his life, Lennon’s artistic endeavours began even before the Beatles achieved worldwide fame; from 1957 – 1960 he attended the prestigious Liverpool Art Institute. In the mid-1960s at the height of Beatlemania, Lennon published several books of poems and illustrations.

Lennon’s Bag One was a singular undertaking coinciding with the start of his solo career. Largely documenting his personal relationship with Yoko Ono, the Bag One legacy is also tied to their activities as peace activists.

Bag One was named for John and Yoko’s company Bag Productions. “Bagism” was a term created by John Lennon and Yoko Ono as part of their extensive peace campaigns in the late 1960s. “Bagism” meant literally wearing a bag over one’s entire body, with the aim to satirize prejudice and stereotyping.

As the story goes, Lennon signed all 3000 plus lithographs while on a peace promotion trip with Yoko Ono to Canada in late 1969. While in Canada, they stayed with Canadian musician Ronnie Hawkins at his home outside of Toronto. Later that week, Lennon and Yoko Ono traveled to Ottawa to meet with Prime Minister Pierre Trudeau to discuss their peace campaign.

The series was completed with a custom white patent leather carrying case designed by French clothes designer Ted Lapidus and hand-stitched by craftsmen in Italy. As a final touch to the creation, the title Bag One and John Lennon’s signature were imprinted in black letters onto the white leather. The Bag One lithographs were first exhibited in January, 1970 at the London Arts Gallery with Lennon and Yoko Ono attending the opening.

A highly collectible series, the complete Bag One set has been sold at auction for amounts as high as $68,368 USD (including Buyer’s Premium).