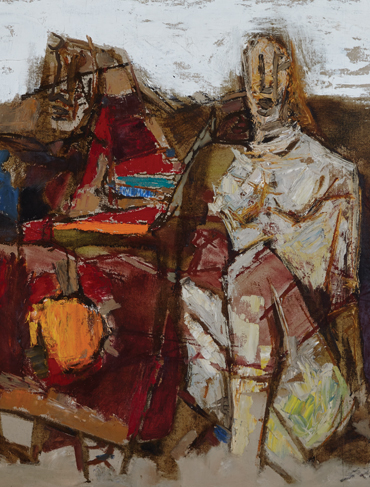 One of India’s most celebrated 20th century artists

Maqbool Fida Husain, also known as MF Husain, was one of India’s most celebrated artists of the 20th century. Husain was a founding member of the Progressive Artists Group, the self-declared “moderns” of Indian art who rose to International fame in the 1940s.

Husain held his first solo exhibition in 1947, the same year India achieved Independence. In 1955, fifteen of his works were chosen for exhibition in the Venice Biennale, garnering him international recognition. Between 1948-1955 Husain travelled extensively. His painting style evolved as he absorbed a range of artistic influences, from the formal characteristics of ancient Indian miniature paintings to the avant-garde styles of modernists such as Klee, Matisse and Modigliani.

One of the features that make Husain’s work so unique is his ability to intuitively incorporate traditional Indian narratives and motifs with modern techniques and sensibilities. The painting Fertility, to be offered in the June 18th auction of International Art, is a particularly fine example of the formal elements of ancient Indian art and modern art blending as one. Here, Husain depicts two figures positioned adjacent to one another against a background of stark white, brown and chartreuse. On the right, a seated male figure faces the viewer, his torso grey with faint accents of deep red and bright yellow. Though his facial features are abstract, his silhouette is defined with broad, dark strokes. The female figure next to him, by contrast, is a beaming, abstract vision of vibrant orange, red, blue and green. The yellow-orange orb glowing within the woman’s torso perhaps best signifies the title “Fertility”. The influence of modern art is evident in Husain’s use of abstract form and fervent application of brisk, intuitive strokes of paint. Influences from traditional Indian art such as Mathura sculpture, Jain and Basohli school miniature paintings, can also be identified in the artist’s approach to line, form and colour.

The female figure, one of the most recognizable motifs in Husain’s paintings, is invariably inspired by iconic representations of deities and holy figures or “auspicious images”, such as beautiful women, musicians, and loving couples. First appearing in the painting “Man”, 1950, the majestic figures of Mathura sculpture inspired Husain’s approach to the female form. Mathura art was a style of Buddhist visual art that flourished in India from the 2nd century BC to the 12th century AD. The energy and dynamism of Mathura sculpture is echoed in Husain’s commanding and sculpturesque figures.

The Basohli School miniatures, produced in the Pubjab Hills in the late 17th and early 18th centuries are known for their bold and imaginative artistic style featuring vivid colour and simple design. The correlation between Husain’s colour palette and the Basohli School’s palette of hot orange, yellow and brown are particularly evident.

In addition to the Basohli School, the influence of Jain miniature painting is also apparent in Husain’s work. Jain Iconography generally depicts a sage in sitting or standing meditative postures in a style characterized by strong, black lines. Similar bold silhouettes are also a staple of Husain’s work, as are smooth, calligraphic strokes that bring expression of energy and movement to his subjects

By 1955, Husain had ended his formative period and had absorbed the main influences that shaped his style. The artistic innovations of modern art became an increasingly important component of his practice, which he adopted and re-interpreted as a language of his own. Perhaps the greatest influences from the Western school during this period were the Expressionists including Paul Klee and Wassily Kandinsky, who believed in art as an expression of the artist’s inner life, often taking the form of a “symbolic language” in their work. From the 1950s on, Husain increasingly began to incorporate metamorphic human figures and symbols such as lamps, spiders, boats, snakes, houses and suns in his work. Dark and intuitive, Husain’s symbols enrich archetypal themes of life, love and death with traces of the collective unconscious.

While Husain was able to incorporate elements of a wide range of artistic traditions within his own practice, it was his ability to reinterpret them into a new and unique artistic style that has made him one of India’s most innovative artists and a leader of his time. For more on Husain’s interpretation of traditional Indian artistic styles please watch the video on how the iconography of Mithuna sculpture is interpreted in “Fertility”.

The Victoria and Albert Museum in London is currently showing the exhibition: M.F. Husain: Master of Modern Indian Painting from 28 May – 7 July 2014.