My Year One: Stories from Our Decorative Arts Department 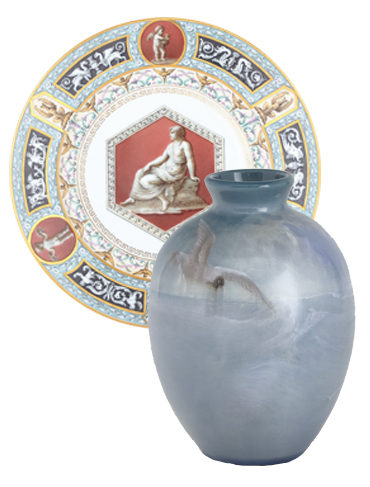 learning about the Romanov’s Raphael Service and more

It’s been nearly a year since I joined the Decorative Arts department. I can’t think of a better way to learn about silver, glass and ceramics (amongst many other things) than to dig in to these shelves of treasures and catalogue them for auctions. The stories that can be told by these objects are innumerable and so much fun to investigate. Beyond answering the question, ‘What is this?’ I can now piece together more parts of the story that the object has to tell, like; How old is it? Where was it made and by whom? Who sold it? Who bought it and why?

One of the most fascinating stories to tell was about Alexander III, his wife Marie and son Nicholas II of the Romanov Dynasty. Although just a small part of their epic story, the set of twelve dinner plates in the Raphael Service that were sold in the auction in December 2014 revealed small details about the family that I hadn’t known before. Such as the friction between Nicholas’ wife Alexandra and his mother. Upon researching where the plates were used this became apparent as the styles of Marie and Alexandra’s homes were very different. Royalty…just like us!

I am also fascinated by the many accoutrements related to activities of bygone eras; such as the multitude of instruments that were required for writing correspondence. Pounce pots, wax-jacks, inkwells, letter openers and writing slants are all sold in our auctions on a regular basis. It’s that intimate connection to the past that adds so much appeal to the items we sell.

I’m learning that there are eras of design that I enjoy more than others, and the Arts and Crafts movement of the later 19th century is one. The simple and refined designs on the Newcomb College vases in our last auction were some favourites of mine, and in June’s live auction there is a Rookwood vase. The finest Arts and Crafts example in our next live auction though, is the set of Minton plaques depicting the seven ages of man. Designed by Henry Stacy Marks and hand-painted with fondness and emotion at the Minton Art-Pottery Studio in 1873-74, they are truly exemplary of the uncomplicated rustic style of the era.

Whether it’s the stories that compel you to collect, the design of the objects, or the perfect intersection of both elements, we hope you’ll continue to explore what we have as our catalogue is just about ready for printing. See you at the previews!

Moorcroft in Bloom: A Brief History of the Work of William Moorcroft