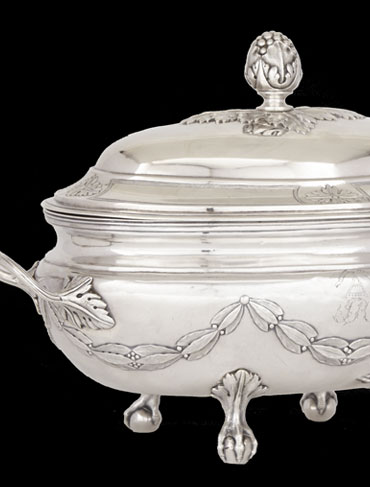 Waddington’s wrapped up our fall season on a high note with much excitement and a new record price for a piece of Canadian silver sold at auction.

The combined Decorative Arts and International Art auction brought together a superb collection of decorative art, rugs and paintings, lending the showroom an air of elegance and warmth that welcomed those who attended the preview over the weekend.

Decorative Arts began with a collection of chess sets, ranging in age from the ninth to the twentieth century, including two elaborately carved sets in ivory, which brought $25,200 each. The collection, shown together, represented various aesthetic traditions from around the world, with examples of nonrepresentational Islamic pieces, a set of Netsuke and some charming carvings of sea creatures.

Some unusual snuff boxes, Georgian silver and eighteenth-century examples of French silver followed an impressive assemblage of bronze sculptures, but the absolute highlight of the evening was undoubtedly Laurent Amiot’s covered soup tureen bearing the arms of the Hertel de Rouville family. The tureen, which was estimated at $25,000 – $35,000, brought more than double its estimate after intense bidding on the phone, online and in the room, finally selling for a record $83,000. We were delighted to see the object purchased by The National Gallery of Canada, and we look forward to seeing this important piece of Canadian cultural heritage on public display in their upcoming exhibition of Amiot’s work in 2017.

Other highlights included excellent Russian silver: a finely engraved silver parcel-gilt beaker which brought well over its estimate of $1000 – $1,500 selling for $7,200 and a Fabergé silver mounted glass claret jug which sold for $6,600.

The auction demonstrated once again that the decorative arts, with its diversity of objects and styles, continues to appeal to a broad audience. Waddington’s is pleased to conclude yet another successful season.