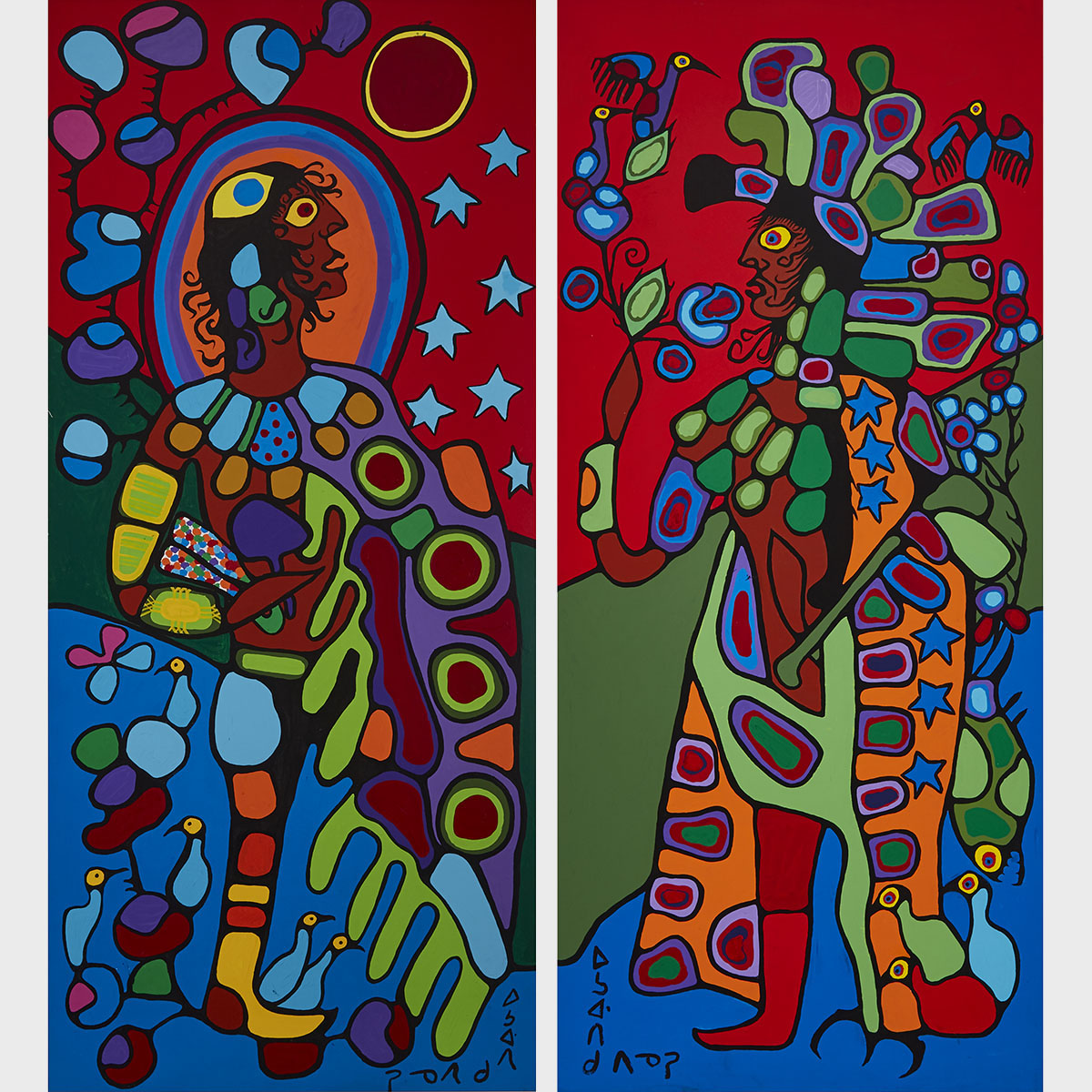 Featured in our Canada 150 Auction in commemoration of Canada’s sesquicentennial.

In accordance with Anishnaabe tradition, he was raised by his maternal grandparents. His grandfather, Moses Potan Nanakonagos, a shaman, taught him the Ojibwe language, history, traditions and legends. His grandmother, Grace Theresa Potan Nanakonagos, was a devout Catholic who taught him the tenets of Christianity. The contrast between these two religious traditions became an important factor in his intellectual and artistic development. At the age of 19, Morrisseau became very ill. When mainstream medicine failed to cure his deteriorating health, his mother called upon a medicine-woman to perform a renaming ceremony. According to Anishnaabe tradition, giving a powerful name to a dying person can give them new energy and save their life. Morrisseau recovered after the ceremony and from then on always signed his works with his new name: Copper Thunderbird.

Morrisseau was a self-taught artist who developed his own techniques and artistic vocabulary. Initially he painted on any material that he could find, especially birchbark, and also moose hide. During the 1950’s Morrisseau collected traditional narratives and oral history providing inspiration and subject matter for his paintings. He also drew upon his own dreams and visions. Morrisseau said, “all my painting and drawing is really a continuation of the shaman’s scrolls. In addition to the legends of his people, his work depicted the cultural and political tensions between native Canadian and European traditions, his personal existential struggles, and deep spirituality and mysticism.

Morrisseau is credited for creating the Woodland School of Art style, also known as Legend Painting or Medicine Painting, a distinct style that blends traditional legends and myths with contemporary mediums. It explores the relationships between people, animals and plants and is rich with spiritual imagery and symbolism.

In the 1960’s, Jack Pollock, a Toronto art dealer, helped introduce Morrisseau’s art to a wider audience. The two initially met in 1962 while Pollock was teaching a painting workshop in Beardmore. Struck by the genius of Morrisseau’s art, he immediately organized an exhibition of his work at his Toronto gallery. One of Morrisseau’s early commissions was for a large mural in the Indians of Canada Pavilion at Expo ‘67, a revolutionary exhibit voicing the dissatisfaction of the First Nations People of Canada with their social and political situation. And in 1989, Morrisseau was the only Canadian painter invited to display his art at the Museum of Modern Art in Paris, to coincide with the bicentennial of the French Revolution.Finally, in 2005 and 2006, the National Gallery of Canada Ottawa organized a retrospective of his work – the first time that the Gallery dedicated a solo exposition to an Aboriginal artist.

Dubbed the “Picasso of the North,” Norval Morrisseau was also awarded the Order of Canada for his contribution to Canadian art. He had laid the groundwork for Canadian native artists to be authentic to their own culture and experiences while still being considered part of the broader artistic scene. An inspiration to generations of First Nations artists, his pictographic style was imitated and copied by many. Through all his many challenges, Morrisseau’s art and dedication to telling his people’s stories persevered.