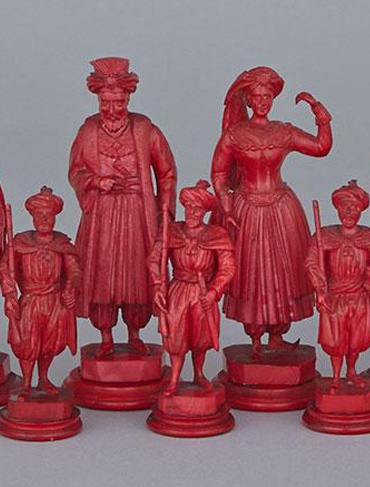 the famed ‘Raphael Service’ amongst highlights of 2014

Our final Decorative Art auctions of 2014 spanned two evenings, and like the ‘Grand Tour’ adventurers of the 18th and 19th century, collectors were presented with an array of exquisite works to return home with.

The first session of Decorative Arts on December 9th was described as “superb”, by Bill Kime, Senior Specialist. Solid performances for Georgian and Victorian silver included works by Royal silversmiths Robert Garrard and Paul Storr, as well as a charming George II silver coffee pot by Elizabeth Godfrey. Determined bidding resulted in an astonishing price for a rare Sèvres bleu celeste box. Kime acknowledged that the piece almost didn’t make it into the auction due to its damaged condition and missing cover. However, the decision to include the 4.3” porcelain boîte was validated by its $18,000 selling price.

Having generated much buzz before the auction (including a visit by members of the American Ceramic Circle) the rare set of 12 Russian Imperial porcelain dinner plates from the famed Raphael Service did not disappoint. Inspiring interest from overseas, online and in the auction room, the exquisite plates sold for $163,500.

The second session of Decorative Arts also generated heated competition for several key lots, including a carved ivory chess set, ‘Battle of Algiers’. Finely detailed, the set features Louis-Philippe and Maria Amalia de Bourbon as white King and Queen, Abdelkader El Djezairi as red King, and Napoleon’s columns and obelisks as rooks. The final sale price was $24,000. Indeed, emperors ruled the evening, as Napoleonic and Grand Tour items were also popular, as was the bust of a handsome Roman Emperor sculpted in marble and bronze, which fetched $18,000. Italian elegance was highly sought and found in the handsome 19th century, Italian Parcel Gilt Ebony and Ebonized Pietra Dura and Ormolu Mounted Cabinet. Estimated at $5,000 – 7,000, enthusiastic bidding drove the price up to $25,200.

As we close out our 2014 auction season, we’re delighted to wrap up our year with such a beautiful bow and look forward to discovering more treasures for you in the new year.

Note: All prices are in Canadian funds and include buyer’s premium.