Rare Silver from Liverpool in Our Decorative Arts & Design Auction 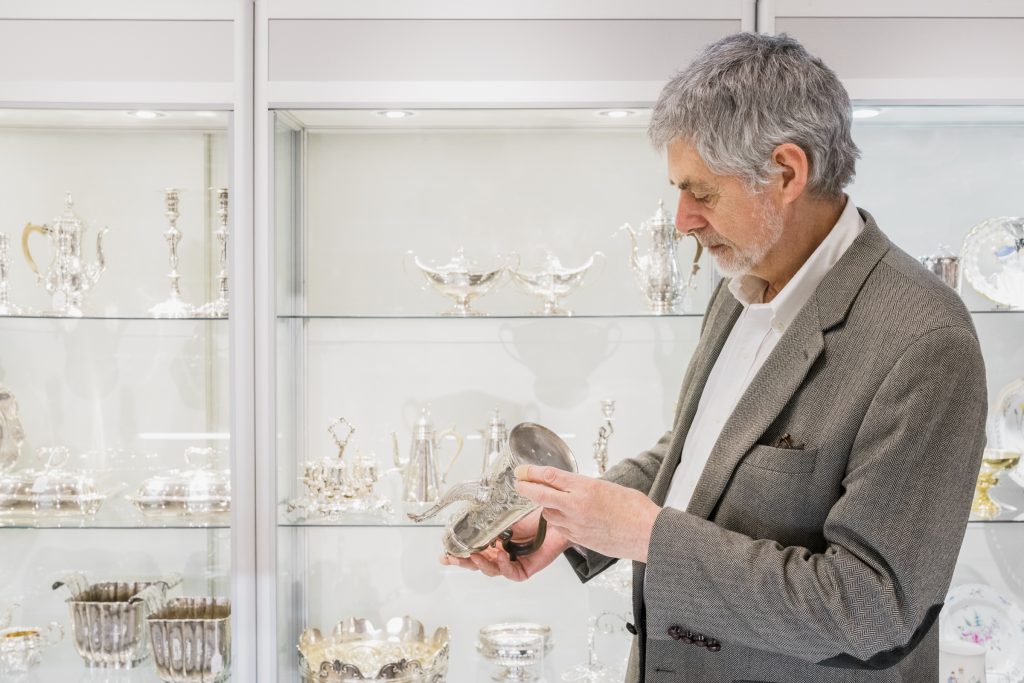 One would assume that Senior Decorative Arts specialist Bill Kime has seen everything.

After all, he has catalogued tens of thousands of silver objects over the course of a 45-year career.

Well, not so fast. In Waddington’s upcoming Decorative Arts and Design Auction, which takes place online June 8 – 13, is a very unassuming coffee pot that managed to stump him – at least temporarily.

The coffee pot, lot 90 in the auction, is carefully described in the catalogue as: ‘of tapering cylinder form with moulded scroll spout, domed cover and wooden handle, chased with elaborate scroll cartouches enclosing scale and lattice panels and flowering foliage’. It bears marks on the bottom that clearly state that it is sterling, but a curious marking of a bird over the maker’s marks ‘BB’ is what brought some pause in the Decorative Arts department.

When consulting Bradbury’s Book of Hallmarks one can find all the typical markings that indicate which city the object was made in. London is a lion, Birmingham an anchor, Dublin a harp, Sheffield a crown and so on. So what could this bird be symbolizing? As it turns out, it’s not just a bird, but more specifically a liver bird, which is a type of cormorant. Look even closer, and the cormorant has a piece of laver seaweed in its beak. This is the symbol, as the homophones would indicate, for the city of Liverpool. Silver objects from Liverpool are so rare that this is the first time Mr. Kime has ever catalogued one for a Waddington’s auction. We are looking forward to seeing how the rarity of this piece contributes to the interest it receives from bidders.

The auction is rich in silver offerings. We are excited to offer a pair of monumental candelabra by Robert Garrard II, silversmith to Queen Victoria. They are of formidable size, each 25 inches tall and together weighing nearly 24 pounds. They are beautifully formed with many intricate details – an excellent example of the Victorian rococo revival style. For period rococo, we also have a matched set of four Dutch silvertable candlesticks from c.1755 – 1766. Collectors of Jensen silver will not be disappointed as there is plenty to choose from, including several pieces from the esteemed Toronto estate of Sonja Bata.

Making up a very large part of the silver in this sale is the property of Johannes van Wees and Johannes van Halle who were the proprietors of Van Hall antiques which operated in Victoria, B.C. They were extremely discerning collectors, selecting only the very best things to add to their personal collection. The quality, design and condition of each piece in their consignment is top notch and we look forward to showing you everything at the previews.

VIEW ALL LOTS in the auction