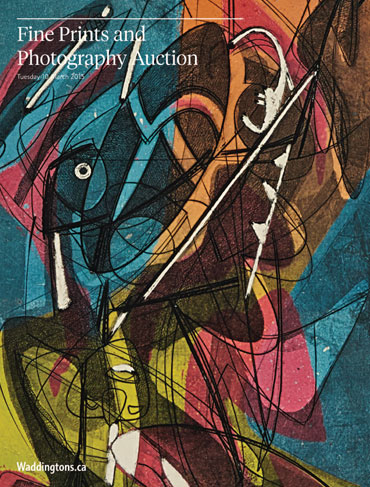 Examples of artistic movements across 500 years

Using outstanding quality and rarity as our guiding principles, we have assembled this sale of fine prints, multiples and photographs tailored to the tastes of both our emerging and experienced collectors. The result is over 300 lots of the most renowned Canadian and international artists that illustrate the multitude of artistic movements that can be found over the course of 500 years of printmaking.

Highlights of this auction include many fine graphics by Canadian printmakers represented by a roster of major works from coast to coast. From Western Canada, we are thrilled to offer the important colour woodcut by Walter J. Phillips, Mamalilicoola, British Columbia, 1928, which graces our inside cover (Lot 155). From Eastern Canada, Alexander Colville’s two silkscreens: Raven, 1990 (Lot 159) and Cat on the Fence, 1959 (Lot 160) convey a realist style similar to that of his paintings.

In addition, we are extremely privileged to offer a rare series of five states of House at Path End, 1977 by Christopher Pratt (Lot 156); from Ontario, two early monoprints by Harold Town (Lots 142A and 142B), The Skates, 1972 by Ken Danby (Lot 211); and from Quebec, Claude Tousignant’s Sans Titre (Series of Six Abstracts), 1975 (Lot 180). This suite has not appeared on the market as a set in decades – its optic vibrations will captivate you.

Works by American Pop artist Andy Warhol are also included: graphics from Warhol’s most famous series, Campbell’s Soup Cans (Lots 92 and 93); Liz, 1965 (Lot 90); and three unsigned acrylic panels attributed to The Factory (Lot 95). These are testaments to Warhol’s preoccupation with mass production, consumerism and the pleasure of repetition.

Prints and complete folios by the most significant international masters such as Henry Moore (Lots 116-120), Pablo Picasso (Lots 297-302), and Marc Chagall (Lot 260-264) present a most powerful offering. Also featured is a Rembrandt van Rijn etching, Old Man in Meditation, Leaning on a Book, c. 1965 – a poignant print filled with pathos (Lot 216). Here the viewer glances into the private world of a scholar leaning on his book.

Works by contemporary photographers Robert Mapplethorpe (Lots 86-89), Saul Leiter (Lot 84), and Richard Harrington (Lots 7-9) are featured alongside classic black and white prints by influential artists of the past. William Notman’s photographs of 19th Century Canada will astound you with faces frozen in time (Lots 15-20).