The Distinctive Style of Jessie Oonark

Jessie (Una) Oonark lived the first 50 years of her life in Utkusiksalingmiut camps throughout the region. Traditional camp tasks, such as processing and sewing caribou and sealskin to produce clothing, would later influence her depiction of Inuit life in her art.

Revered as a textile artist, Oonark built on her skills as a seamstress. Sewing garments, she would often create decorative embellishments by cutting away material and creating snugly fitted inserts of contrasting skin—a precise and exacting craft repeated in the creation of her brightly coloured wall hangings.

A distinguished multi-disciplinary artist, some of Oonark’s most powerful pictorial story-telling is achieved by the representation of several narratives in one work, such as found in this extraordinary double-sided wall hanging.

On one side of the wall hanging (pictured above), Oonark depicts a traditional summer scene: three Inuit on kayaks with seasonal tents in the background. Two large birds happily greet the kayakers as they arrive at their campsite. The minimalistic facial profiles and embroidered lines are major design elements of Oonark’s work, as are the symmetrical compositions.

Typical of her oeuvre, these components are also seen on the reverse of this textile work. In this scene, two rows of heraldic figures greet each other, eleven in each row. There is a subtle break in the lower line of people though – one lone, dramatically-embroidered bird spirit reaching out – a small departure that breaks the symmetry and enlivens the whole textile.

Oonark’s wall hangings have a captivating presence. Their size, intensity, and technical brilliance have attracted many fans over the years, and are found in major private collections around the world, with the largest example in the National Arts Centre in Ottawa. A wall hanging made by Oonark was presented to H.R.H. Queen Elizabeth on behalf of the Inuit of the Northwest Territories.

Literature: Art Gallery of Ontario, The People Within (1976) exh. cat.

Exhibited: Spirits and Dreams: Arts of the Inuit of Baker Lake, The Raven Gallery, Minneapolis, 1979

Advantages of Being a Woman Artist

Printmaking in the Arctic 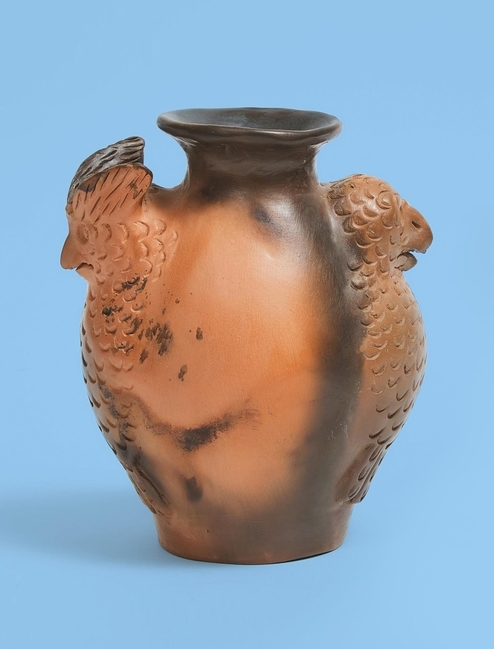 Brief History of Ceramics in Kangiqliniq

Read About Our ‘Waddington’s West’ Auction