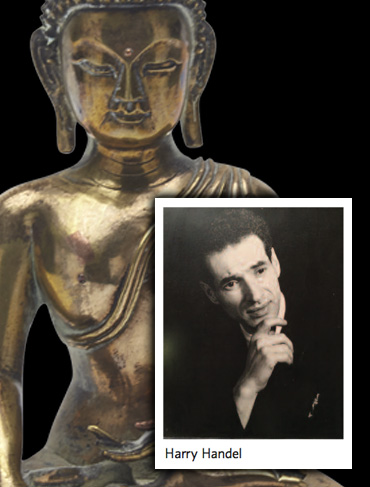 Handel’s Asian Art Collection to be offered at auction

Throughout history, artists, intellectuals and philosophers have gathered together to discuss the world around them. At a coffee house, in someone’s home, or a bookstore; like Café Tortoni in Buenos Aires, Gertrude Stein’s Paris salon, and in Montreal in the 1930s and 40s, Harry Handel’s Everyman’s Bookstore. A second-hand bookstore in downtown Montreal that would become an intellectual centre for those fascinated with exploration, anthropology, religion and art.

Harry Handel (1916-1972) opened Everyman’s Bookstore during the 1930s. A self-educated man, he would become an authority on Canadian art and culture, and become close friends with the leading Canadian artists of the day, (Arthur Lismer, Sam Borenstein and A.Y. Jackson) as well as Alex Gurie, of Montreal’s famed Gurie Gallery. It was Gurie who would introduce Handel to Asian art and antiques. The collection in this auction was purchased from the Gurie Gallery in the 1950s and passed onto Handel’s family by descent.

Toward the end of Handel’s life, his second-hand bookshop had evolved into an estate buying and art-dealing business. Everyman’s Bookshop closed in 1970 when Handel died at the age of 55.

Waddington’s is proud to offer Harry Handel’s Collection of Asian Art as part of our December 1, 2014 auction of Asian Art, including exquisite Chinese and Himalayan bronzes, Chinese jades and ivory carvings.