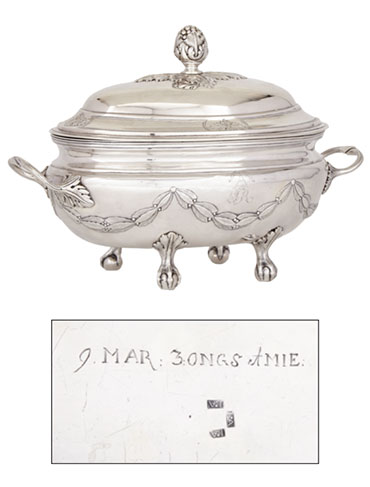 Laurent Amiot (1764-1839) was a prominent figure in Canadian silversmithing in the late 1700s, a period that witnessed the convergence of diverse aesthetic programs. As a young and talented silversmith, he was awarded the opportunity to apprentice in Paris by the Roman Catholic Church. During the five years that Amiot spent in France, he was strongly influenced by the Louis XVI style, a branch of French Neoclassicism that was popular in Paris at that time. In 1787, Amiot returned to Quebec with exceptional technical skills and a high degree of respect for silversmithing, considering himself foremost an artist. Silversmiths were traditionally classed as craftsman, and among Amiot’s contributions to Canadian decorative art was his progressive view of silversmithing as a serious artistic practice.

Throughout his career, he insisted on being referred to as Maître ès Art Orfèvre (master of the silversmithing art), and set himself apart from other Canadian silversmiths by drafting preliminary sketches. These preparatory drawings supported the idea that Amiot’s work was intellectual and should be appreciated as fine art. Moreover, the sketches now provide a unique perspective on both Amiot as a creative individual and his silver in a historical context. Amiot led the industry in both quality and quantity, and was undoubtedly the most influential silversmith working in Quebec between 1790 and 1840.

Although Amiot’s impact is most visible in the stylistic and decorative developments that he initiated in church silver, he also responded to the emerging market for domestic silver that was fuelled by the rising middle class and their desire for household objects. His domestic silver, including the present tureen, often borrowed motifs from English Neoclassicism or skillfully incorporated elements of both a Louis XVI style and designs derived from British imports. These stylistic choices reflected the broader cultural atmosphere of Quebec in the last decades of the eighteenth century. The Roman Catholic Church preferred traditional, French designs while the political and social spheres were predominately English and yielded English tastes for table silver. Amiot is most celebrated for his ability to incorporate and harmonize these different European styles in his original work.

Soup tureens are the largest and in many ways the most impressive of Amiot’s domestic silverware. The Soup Tureen with the Arms of the Hertel de Rouville Family is one of only two that Amiot is known to have made during his career. It is significant both as an eighteenth-century example of Canadian colonial silver and for its importance in the context of Amiot’s oeuvre. Both of Amiot’s tureens incorporate a convex and elongated body supported on spherical clawed feet, a reference to the English Rococo movement, while the covers and ornamentation, specifically the chased laurel garlands on the girth and acanthus motifs on the covers draw inspiration from Neoclassicism. The Hertel de Rouville tureen, with its reeded serpentine silver handles, appears more complete and arguably more sophisticated than the example with wooden handles found in the Royal Ontario Museum’s permanent collection.

Amiot encouraged the public to appreciate his fine work in silver for its artistic merits, and in elevating decorative silver above craft, he advanced the art of silversmithing in Canada. His innovative use of hybrid styles rippled in the waters of the silver industry throughout his career, and his artistic legacy now forms an integral part of our cultural heritage. The present soup tureen, a Canadian treasure, tells its part of the story of life in Lower Canada, reflecting the broad range of styles and high level of sophistication that characterized silversmithing in Canada at the end of the eighteenth century. Likewise, with its strong ties to both English and French stylistic traditions, it occupies a significant place in early Canadian history.