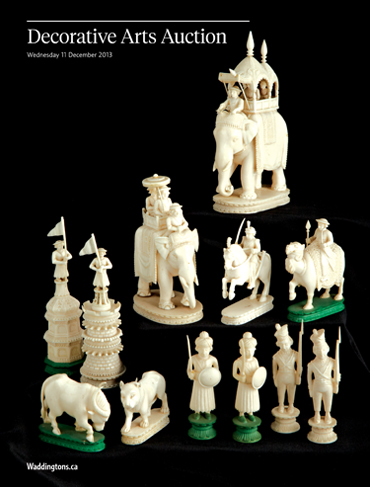 Each sales has its own character

We’ve had a busy fall and we’re now pleased to present the fruits of our labour.

Every sale seems to develop its own character and this one is no exception, shaped by the various collections entrusted to us and individual consignments of interesting and exceptional objects.

Last year, we lost an old friend and fixture around the salerooms in the passing of Kenneth McGowan. Ken was a discerning collector with a keen eye for quality, not to mention quantity, and a number of objects from his estate are included in this sale.

Margaret and Murray Leslie received a Brooklin Pottery plate as a wedding present in 1960, thus beginning their passion and great affection for the work of Theo and Susan Harlander, German immigrants who were producing extraordinary and distinctive pottery at an old farmhouse at Brooklin, Ontario. The resulting landmark collection, spanning nearly thirty years at Brooklin, is included in this sale. With the assistance of Linda Paulocik, former Curator at the Station Gallery in Whitby, we were able to produce a documentary catalogue of the collection and rotating highlights have been exhibited here along with Charles Bronfman’s Claridge Collection and at our previews of Inuit Art, Canadian Fine Art and Asian Art this fall, to enthusiastic reviews.

We have some very interesting silver in the sale: an impressive Victorian Scottish cattle breeders’ trophy, “The Ayrshire Herd Book Cup”, which though a challenge cup, was won outright in 1898 and has been passed down in the family since then; on a smaller scale, from the Meech Collection, there’s a charming George III articulated fish form vinaigrette in fine condition, along with several other unusual objects and some early spoons; complimenting these, a good and scarce copy of Commander and Mrs. How’s three volumes on early spoons; there are some one hundred lots of silver in all.

The exceptional Anglo-Indian John Company carved ivory chess set detailed on the cover of the catalogue is one of a number of sets consigned to us recently from a private Montreal collection.

Also included in the sale are good selections of French cameo glass, early Coalport and other English porcelain, an outstanding ormolu mounted ‘Sèvres’ large covered vase on stand, a monumental Wilhelm Schiller vase on stand, bronze and marble sculptures, works of art, decorations and clocks including a large French temple clock, formerly in the collection of King Farouk.
We hope that you will be able to come and see us at the previews or visit us online – we’re certain that you’ll find something of interest!