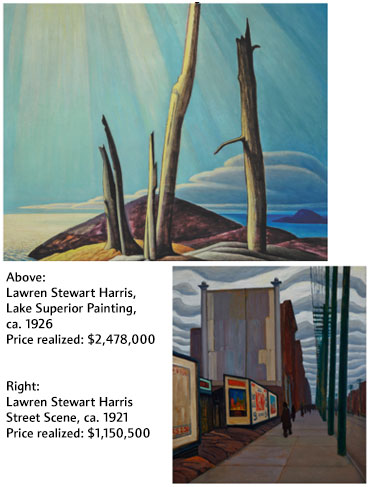 On the evening of May 26, 2014, Waddington’s offered for sale 164 works of Important Canadian Art. The auction realised $6 million (including buyer’s premium). The sale is a culmination of a three-month selection process of meeting with potential consignors to evaluate works for possible inclusion in this auction. A number of works purchased had been featured in gallery exhibitions at the National Gallery of Canada and other important Canadian institutions.

Linda Rodeck, Vice President of Fine Art and Senior Canadian Fine Art Specialist, said: “We knew we had interest in Lake Superior going into the evening – paintings of this subject matter are exceptionally rare and we knew ours would sell well. But it was our second Lawren Harris, Street Scene, that captured everyone’s imagination. It ended up as the star attraction by doubling our pre-sale expectation for it. The room erupted into spontaneous applause upon completion of the sale. It was a momentous event. And the outstanding news didn’t stop there. Waddington’s set eight records this evening. Our clients are delighted.”

It was no surprise that Waddington’s cover piece elicited exceptionally motivated bidding from Canada’s premier collectors. After a determined struggle between bidders in the room and on the phone, the Carr was hammered down at $400,000 – more than doubling its pre-sale auction estimate – for a total sales price of $472,000 (including buyer’s premium).

The Molinari offered by Waddington’s tonight shattered the pre-existing auction record – soaring past our pre-sale estimate of just $70,000-90,000. It was hammered down by auctioneer Stephen Ranger for a whopping $200,600 (including buyer’s premium).

Works by members of Painters 11, including Cahén, Hodgson, and Nakamura were also sold. Prior to the sale, there was an expectation from the collecting community that the Cahén oil could set a new record, which it did by more than doubling the pre-existing record for the artist. It was hammered down at $100,000 ($118,000 including buyer’s premium).