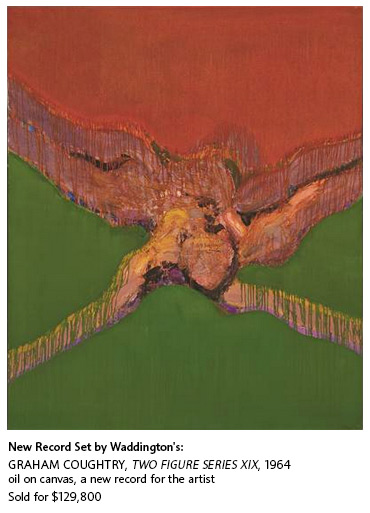 “We are delighted with the results”, said Linda Rodeck, Waddington’s Senior Specialist, Canadian Art. “We achieved 95% of our target and received glowing reviews on everything we offered. With more people in attendance than ever before at both the previews and the auction, it was a tremendous validation of our effort.”

Rodeck explained that the sale was a culmination of a three-month selection process of meeting with potential consignors to evaluate works for possible inclusion in this auction. A number of works offered have been featured in gallery exhibitions across the country, and included rare and previously undiscovered finds, such as J.E.H. MacDonald’s 1912 oil sketch for Tracks and Traffic (the canvas is in the Art Gallery of Ontario’s collection). Its conservative estimate and exceptional importance brought out a discerning crowd that bid this work up to $200,600 (includes buyer’s premium).

Other works that did exceptionally well include a small Lawren Harris oil sketch executed in Algoma and featured on the front cover of Waddington’s auction catalogue which sold for $188,800 (includes buyer’s premium) against an estimate of $75,000-100,000.

An extraordinary Jack Shadbolt depicting Granville Street at Night, 1946 attracted the anticipated attention from collectors. Bidding reached $112,100 (includes buyer’s premium) setting a new record for a watercolour by this artist.

WILLIAM RAPHAEL, HABITANT, HORSE AND SLEIGH,
oil on canvas, a new record for the artist.
Sold for $44,250 (includes buyer’s premium)

JACK SHADBOLT, GRANVILLE STREET AT NIGHT 1946
a new record for a watercolour by the artist
Sold for $112,100 (includes buyer’s premium)