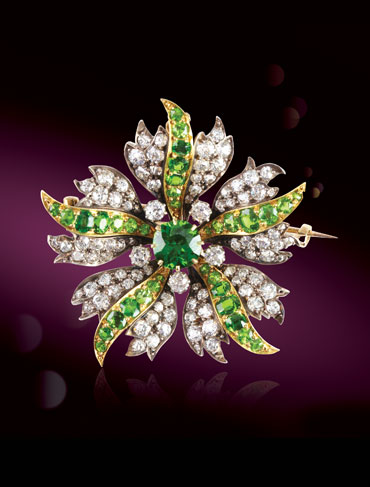 Donald McLean reviews the highlights of the past year

The jewellery department enjoyed a very successful 2013. We held a total of 12 auctions through the year, including three online auctions, and finished the year with sales of well over $1.5 million. It was also a record year for the number of lots to pass through the department with over 2,500 lots reaching the podium.

Our two 2013 Fine Jewellery Auctions were both led by 19th century gold and silver brooches. In June, the catalogue cover featured a beautiful floral brooch set with demantoid garnets, a particularly rare and beautiful gemstone. The brooch generated considerable world-wide interest and was hammered down for $9,000.

Six months later, the catalogue cover again featured an old brooch, this time a wonderful bow brooch centring a large old mine cut diamond. This brooch also exceeded expectations and sold for $15,600, an indication that the market for high quality antique pieces remains as strong as ever. These two auctions saw the return of higher quality pocket watches being included in the Fine Jewellery.

The market for pocket watches as always been unpredictable … up one auction and down the next …. but this past year considerable interest has been shown in the rarer makes, movements and complications, with prices further boosted by the high gold prices we presently enjoy. We hope to see this market continue as we will be featuring a considerable number of pocket watches over the next 6 months. Wristwatches enjoy a much firmer market, and high-end wristwatches are always among the most popular lots in the auctions. Examples by Rolex, Patek Philippe, Omega, Cartier, Panerai and Piaget all brought solid prices in these auctions, and their popularity seems to continue to be on the increase.

Waddington’s various online auctions have been an extremely popular addition to our auction schedule. Our bi-annual auctions of Signed Silver And Costume Jewellery always feature an array of affordable jewellery, spanning from the simple and sublime to the wacky and visionary. Our 2013 auctions featured jewellery by Canadian designers including Maryon Kantaroff and Poul Petersen, pieces by major manufacturers such as Cartier, Tiffany, Christian Dior, Miriam Haskell and Georg Jensen, and a wide spectrum of artisan work from Mexico, Israel, Norway, England, and of course, the United States. In particular, there were numerous pieces by the Canadian designer Sherman highlighted by a clear rhinestone bangle which sold for $1,600.

We were very pleased with the results of Waddington’s first auction comprised solely of First Nations Jewellery which enjoyed considerable interest from across Canada. Two small gold pins by famed Haida artist James McGuire sold for $1,850 each in this auction which also featured works by Charlie Harper, Amos Dawson and Earl Muldon.

Our relatively new Numismatics Auctions continue to grow in popularity and attendance. A massive collection of world coins from a private estate dominated the May auction, and required extended public preview times due to the sheer quantity of coins to be reviewed. The auction ended with the majority of the lots bringing twice the estimate or more. In all the 2013 Numismatic Auctions, the stars were the paper currency, with good banknotes continuing to bring great prices in the sale room. Two rare Canadian notes, a Dominion Bank 1900 $5 and an Imperial Bank1886 $5 together sold for $19,200, despite their relatively poor condition, and a Dominion Of Canada 1923 $2 note brought $1,560.

Finding the Sparkle in 2020

Jewellery by a Celebrated French Medallist