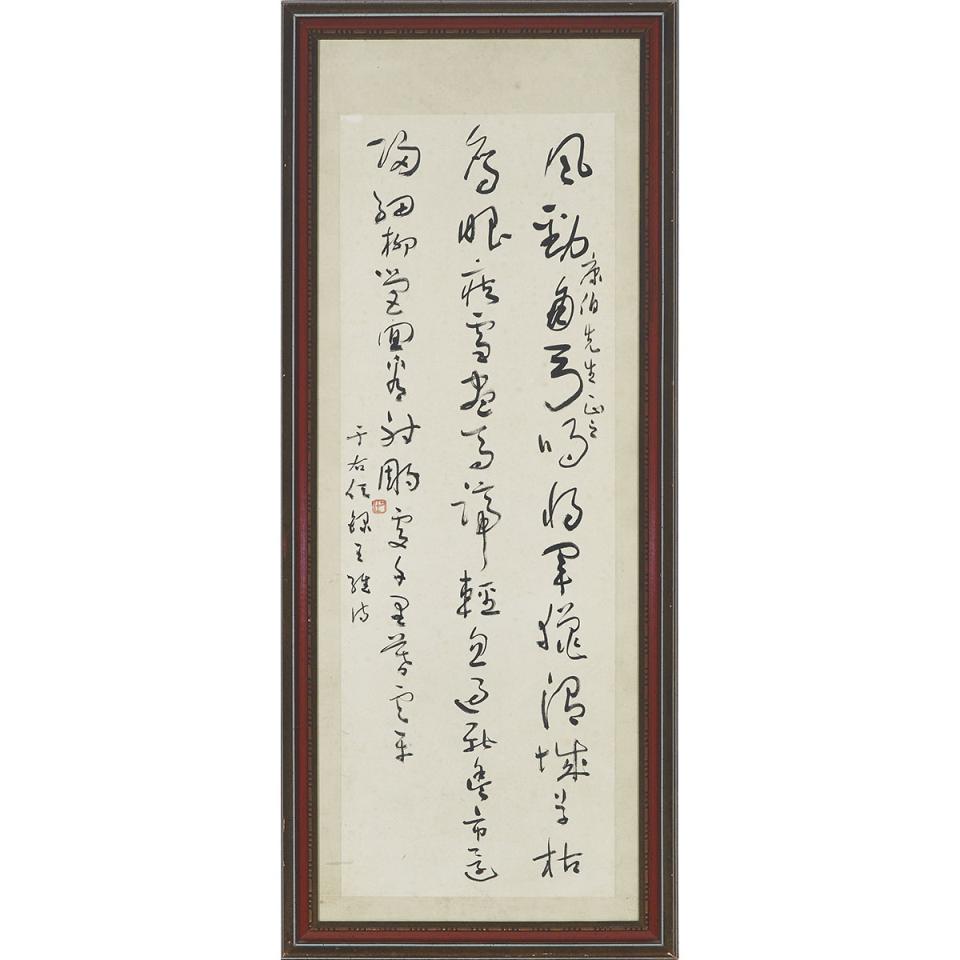 From a private collection, Taiwan, and thence by descent

Born on the 11th of April 1879 in the town of Hedaogang in Sanyuan County, Shaanxi Province in China, Yu Youren is regarded as one of the nation’s modern masters of calligraphy. Following the sudden death of his mother in 1880, Yu Youren was raised principally by his aunt. After working briefly as a goat herder, he attended private school at the Mawang Temple in Yangfu, studying under Mr. Diwu. In 1889, Yu Youren returned to Sanyuan with his aunt, and began study at the school of Mao Banxiang where he became interested in archaic and modern forms of poetry. He was also exposed to the works of Southern Song patriots such as Wen Tianxing and Xie Fangde. At the age of seventeen, Yu Youren placed first in entrance examinations, and continued his studies at the Dao Academy in Sanyuan, the Weijing Academy in Jingyang, and Guanzhong Academy.
In 1900, Yu Youren’s revolutionary leanings began to solidify. He penned a letter to the Pacification Commissioner of Shaanxi urging action against the Empress Dowager Cixi. He also began using poetry as an outlet for his frustrations with the government, and he eventually collected his works into a book entitled Poetry Drafts from the Hall of Tears and Mockery. In 1903, Yu Youren passed the civil service examinations to become a Provincial Graduate. However, due to his satirical writings, the government branded him a revolutionary. He fled to Shanghai where he enrolled in the Aurora Academy under the assumed name Liu Xueyu. In 1906, Yu fled to Japan where he met Sun Yat-sen and the Tongmenghui, which he officially joined. He returned to China in 1907, and over the next three years established various newspapers that were strongly opposed to the corrupt governmental culture. He was arrested and imprisoned numerous times, but remained undaunted in his vocal opposition of the government.
Yu Youren remained active in the revolution throughout his career, holding a number of prominent positions in the organization of revolutionary activities. However, he also became central in the cultural world. He pursued many endeavors to preserve and protect artistic heritage. In 1936, Yu collected examples of Chinese characters and complied them in Thousand Character Essay in Standard Cursive Script. In 1941, along with fellow members of the artistic community, Yu Youren named the fifth day of the fifth lunar month as Poets’ Day, and he was also instrumental in the establishment of the Dunhuang Art Academy.
In 1949, Yu followed the Chinese Nationalist government to Taiwan where he lived until his death in 1964. He continued to pursue his interests in poetry and calligraphy while in Taiwan, producing works that became very popular with collectors. A scholar of calligraphy, Yu Youren is considered a modern master. His distinct and animated style is desirable, and can be found in many prominent public and private collections.