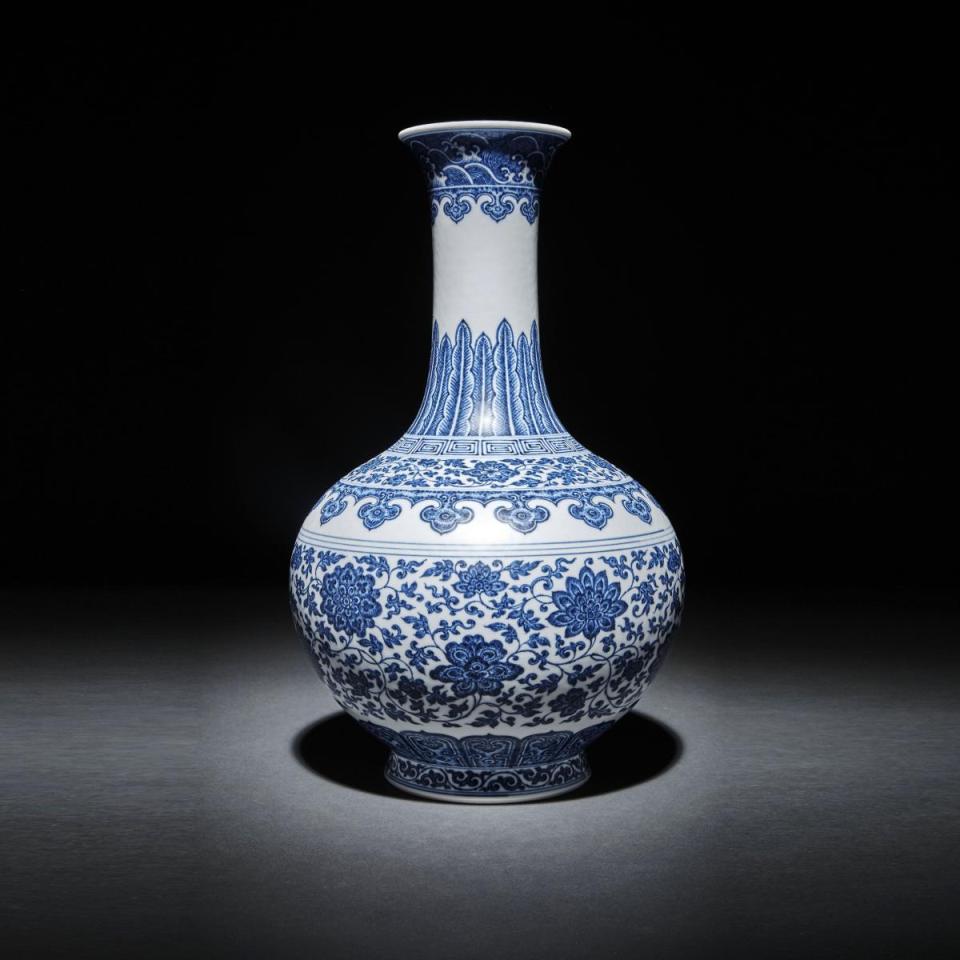 The vase is well potted with a globular body rising from a splayed foot to a tall neck flaring at the rim. The body is painted with a broad frieze of composite scrolls, with repeated petal lappets below. The shoulder with a trefoil collar and a band of dense scrolling lotus flowers. A band of layered upright leaves extends up the neck, with a further trefoil band beneath cresting waves at the rim
height 14.9" — 37.8 cm.
underglazed blue six-character Qianlong mark, a Swiss trading company’s sticker (北京及上海工藝品出口公司指定在瑞士經銷處) and two collector’s stickers to the base

With carefully controlled bursts of ink resulting in small concentrated pools of paint, the “heaped and piled” method of decoration, as seen in this present example, purposefully recalls earlier 15th century techniques. Although potters had mastered the art of firing and painting underglaze cobalt blue by the 18th century, this stylistic reference, with its bold brushwork and sporadic bursts of ink, served as both a reminder and tribute to the highly prized and admired works of previous dynasties. A similar bottle vase of this kind was sold at Christie's New York, March 24, 2011, lot 1673, Another similar vase of same height is illustrated in The Official Kiln Porcelain of the Chinese Qing Dynasty, Shanghai, 2003, p. 233. Two similar Qianlong-marked bottle vases of comparable size were sold at Christie's New York, March 19, 2009, lots 567 and 738

Four vases of this pattern are illustrated by R. Krahl in Chinese Ceramics in the Topkapi Saray Museum, Istanbul, vol. III, London, 1986, p. 1105, no. 2564, where they have been fitted with metal mounts to suit Ottoman use