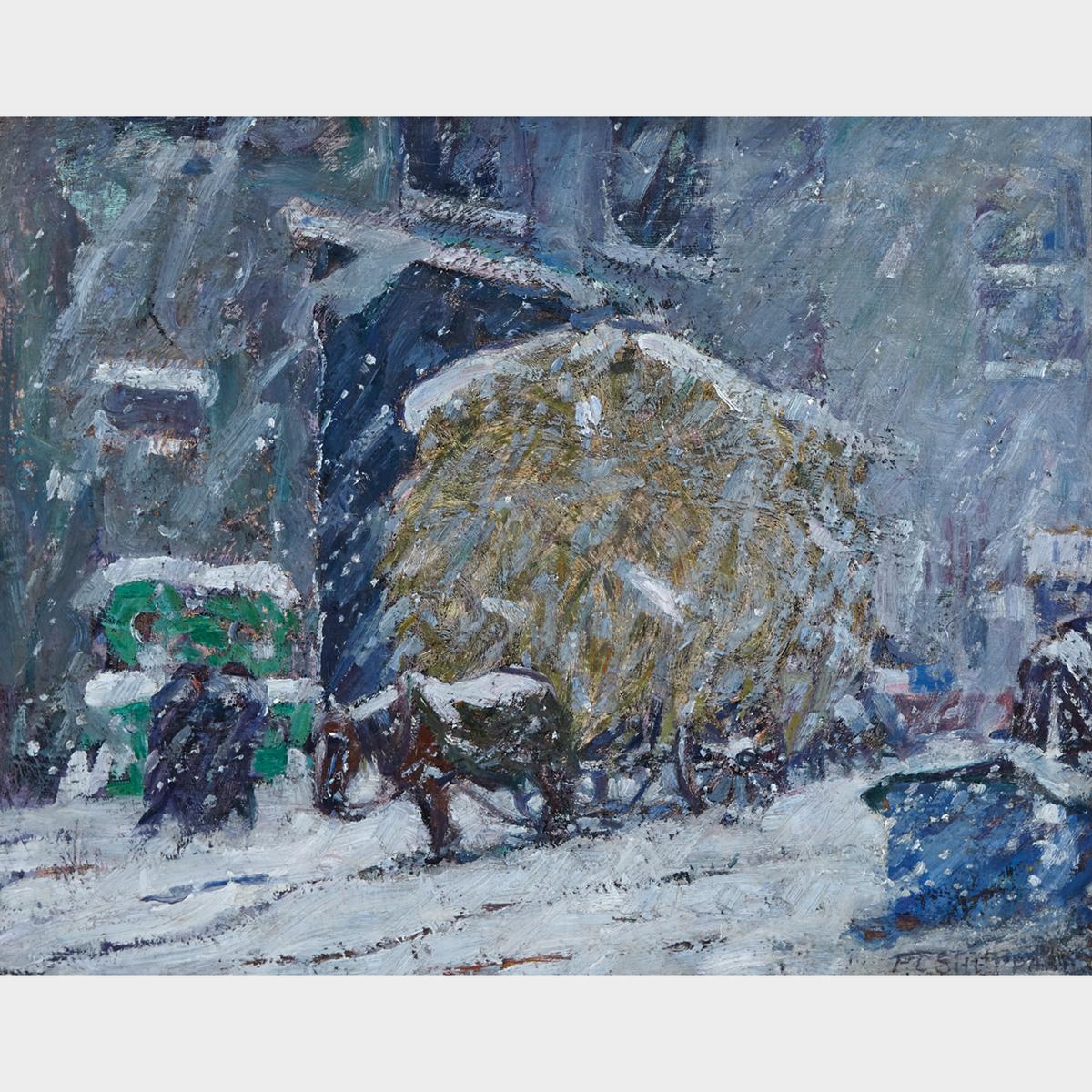 Peter Clapham Sheppard painted in a number of locations throughout his life, visiting cities such as Fredericton, Montreal, Quebec City, Toronto and Hamilton, among others. While this work is not attributed to a specific place, as the title has been lost over time, it could be any number of major Canadian urban centres. Numerous public markets, each devoted to particular commodities and goods including fruits and vegetables, wood, cattle, and hay, were fixtures within the cityscape during Sheppard’s lifetime. Until the early 1940s, it was not uncommon for deliveries about town to be made by horse-drawn wagons and sleighs.

The delivery depicted in this lot may have been to the hay market in Toronto – in the eastern part of the city between Jarvis and George Streets, or in Montreal – in either present-day Griffintown or Victoria Square. It is possible that the cart has stopped at the weigh house for assessment of its load prior to sale. Alternatively, the delivery could be coming from the market, en route with a large purchase to one of the many municipal buildings that relied on horsepower in their daily conduct of business, such as an armoury, police station or post office (as suggested by the large buildings which set the stage for the hay wagon).

As though caught off-guard by an unexpected storm, the drivers huddle in conversation and the horse pauses for rest from the weight of its burden. The vehicle transporting the hay is a cart and not a sleigh – its wheels unsuitable for inclement weather. Perhaps winter has come unexpectedly and has caught the farmers unprepared? Details of the urban landscape are blurred in the winter whirlwind – hinted at by parcels of greens, blues and pinks.

In the early nineteen-teens, Sheppard counted among his colleagues, esteemed painters such as J.E.H. MacDonald and Lawren Harris, all of who were interested in the atmospheric affects caused by industry or weather. As A.Y. Jackson recounts: “It was through… Morrice that (the young Canadian painters) first became aware of the fresh and invigorating movements going on in the art circles of France,” specifically Impressionism. There were other influences at work in Canada in those early years, including William Clapp and Clarence Gagnon. However, Jackson and others unanimously acknowledged that it was Maurice Cullen, who could hold title as the father of Canadian Impressionism. This lot is reminiscent of Cullen’s scenes of oxen hauling hay, and of his urban scenes where cab stand horses dutifully wait for passengers in driving blizzards.