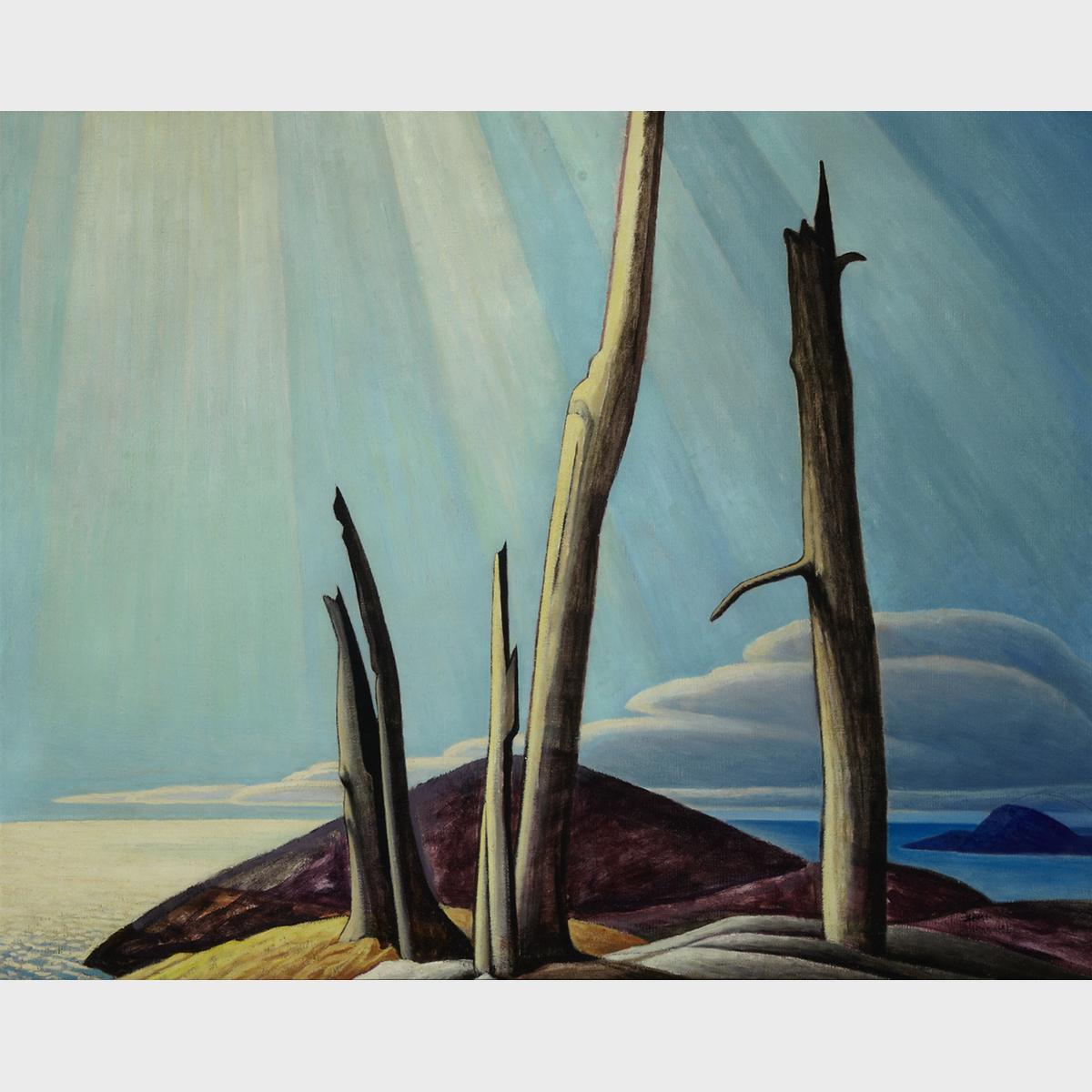 In A.Y. Jackson’s biographical sketch of Lawren Harris, the preface to the 1948 Harris exhibition at the Art Gallery of Toronto, Jackson writes that while “Algoma provided MacDonald with the subject of his finest canvases... Harris was (already) tending toward simplification and this opulent heavy wooded country was difficult for him. He needed more space and found it on the North Shore of Lake Superior... It was this country that gave Harris the motives for many of his best-known canvases. There was a feeling of space, dramatic lighting, the stark forms of rocky hills and dead trees, and beyond, Lake Superior, shining like burnished silver.”

It may have been the naturally occurring simplicity of the land and reductions of forms that produced in Harris an affinity for Lake Superior. Adamson writes: “Reduced to essential forms by successive ice ages, the landscape differed strongly from the variegated scenery of Algoma. All transient effects seem to have been eliminated. Harris was captivated by this sense of timelessness and his Lake Superior paintings directly embody this quality.”

Indeed, most critics and art historians agree that while Georgian Bay and Algoma were pivotal for Harris’ Group of Seven colleagues, Lake Superior was crucial to Harris’ evolution. Tension, simplification and dramatic lighting as highlighted in this lot are hallmarks of this period of transition.

Harris embraced the north as a place of spirituality and compositions such as Lake Superior Painting were informed by his growing interest in Theosophy and Transcendentalism and a move away from the Nationalism that informed early group works. Adamson describes it as a move away from the particular to the universal.

Writing of this period, Dr. Charles Comfort, then director of the National Gallery of Canada, remarked that after his Algoma experience Harris searched for “something more austere, geographical equivalents which supported his theory of replenishing values... and confirmed his doctrine of the spread of spiritual emancipation from the cleansing north.” Indeed, Harris felt that Lake Superior provided the inspiration to produce paintings in which man, nature and spirit were one.

Paul Duval writes: “It is in the richly productive decade between 1920 and 1930 that the technical and aesthetic resources possessed by Harris are most clearly apparent... The contrast of Lake Superior’s rocky shoreline to the richly tangled forest of Algoma and the crumbling textures of the slum houses seemed to get Harris into creative high gear... Out of the seemingly unpromising material of Lake Superior’s barren rock and open sky (which, according to Harris, in their singing expressiveness and sublimity existed nowhere else in Canada) and withered trees, Harris composed a number of masterpieces.”

Increasingly in the 20s, Harris’ work grows more formal. Hart writes that Harris’ main concern “appears to be to impose strict compositional control upon the majestic landscape. Pentimenti (as evidenced in this lot) indicate the colour, size and thickness of several shapes were adjusted for the sake of refinement and pictorial unity.”

Lake Superior Painting embodies the two important characteristics of this period of Harris’ production that are powerfully rendered here: infinite space and supernatural light. The radiating bands of light symbolize high intellect, a kind of divine intelligence and space is synonymous with consciousness. Adamson writes: “Both elements are directly related to (Harris’) occult vision of reality.”

It is difficult to know precisely when this important canvas was executed. After 1924, Harris seldom dated works and Hart postulates that “perhaps he felt their autonomous quality would be compromised by reference to the make and time of its completion.”

Lawren Harris is the subject of three major exhibitions which will take place over the next several years: Lawren Harris - Canadian Visionary organized by the Vancouver Art Gallery, a second exhibition organized by the Hammer Museum of Los Angeles in association with the Art Gallery of Ontario, and Mystical Modernism curated by Roald Nasgaard which will visit the McMichael Gallery in 2016.