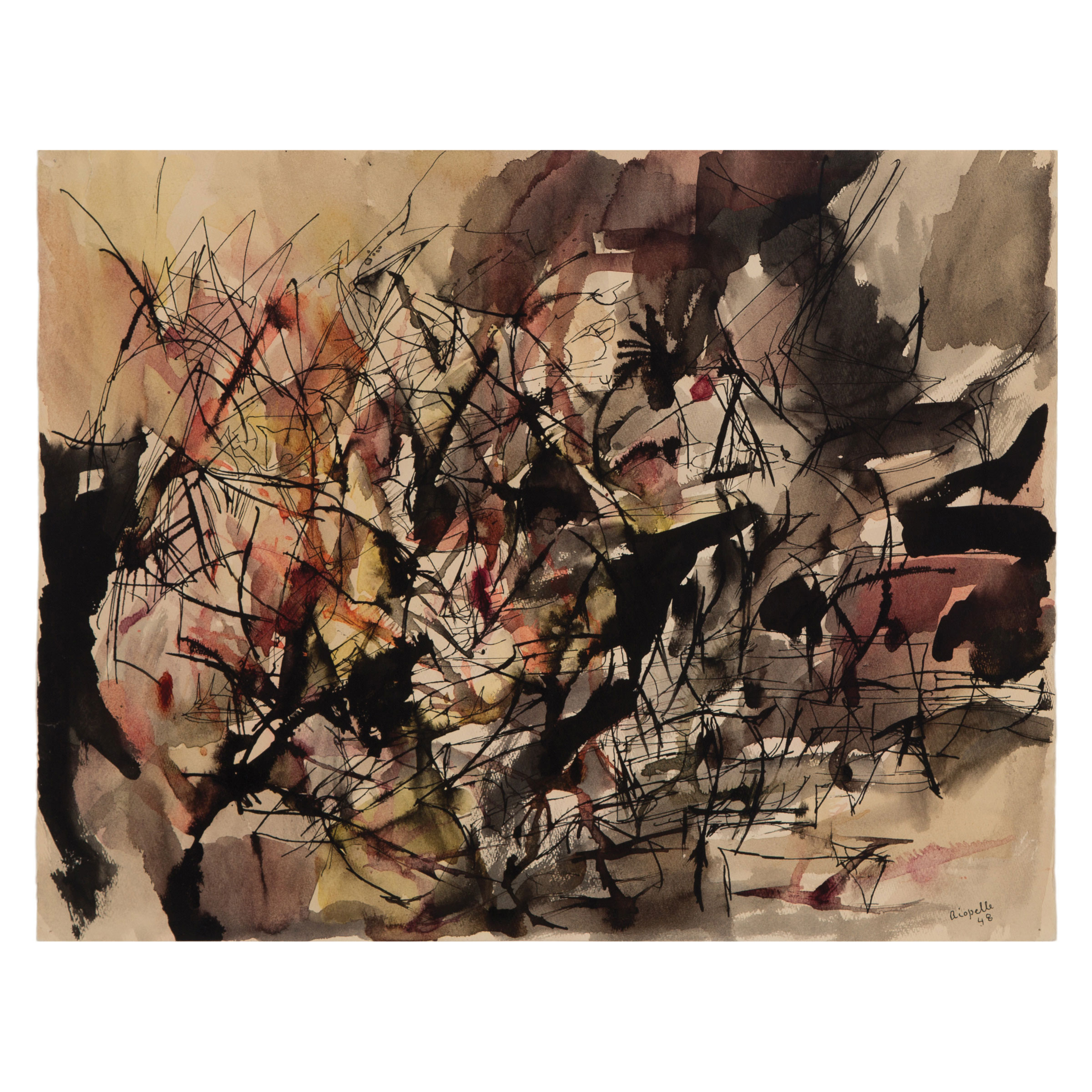 Jean-Paul Riopelle (1923-2002) is arguably the most internationally renowned Canadian artist born in the 20th century and has made acclaimed contributions to the development of abstract art. He is one of two Canadians whose work is chronicled in H. H. Arnason’s, History of Modern Art, used for decades worldwide as the standard university text.

Composition from 1948 is a unique, rare and important document in the history of Canadian art. It was created in the year that Riopelle was a signatory to the ground-breaking manifesto Refus Global. Stylistically it is a perfect complement to the design Riopelle created to adorn the covers of that document. While it has been dated by the artist ‘48, we are not certain whether it was made in Paris, or upon his brief 1948 return to Quebec or upon his subsequent return to Paris.

Historically, Riopelle’s development is linked to his time as a young student associate of Paul-Émile Borduas. This aspect is perhaps overtold. Riopelle graduated in 1945 and by 1946 or 1947 he had left Canada, not to return to take up residence again in Quebec until decades later, well after Borduas’ death.

Although Riopelle was a proud exhibiting member of Les Automatistes his rapid stylistic ascension was due to his close association with prominent senior artists in Paris. He was the sole Canadian to exhibit with the Surrealists. Composition shares more with the automatic writing technique of André Masson and Max Ernst. His first solo exhibition was in 1949 at the Surrealist Galerie La Dragonne. Soon thereafter it was to be followed by a succession of solo exhibitions at significant venues such as Pierre Matisse Gallery New York, 1943.

Composition employs a strident palette which would become the signature anchor for Riopelle works. Some have felt that the black tendril lines and reddish patches harken to a recollection of fall trees. Riopelle emphatically stated that these works were purely abstract, non-objective compositions unrelated to abstractions from nature. The methodology for abstract, automatic Surrealism was to commence a work in the absence of pre-ordained structural thoughts. A first mark on the page called for a counterbalancing action, creating myriad gestures in a part by part relational construction. The work would be complete when a sensed rhythmic harmony was achieved. In these early works neutral white spaces would be left untouched. Soon he would become increasingly obsessed with overlaying countless layers of marks covering the entire surface multiple times. Early works such as Composition are the “Rosetta Stone”, revealing the underpinnings of the scaffold upon which his works are built.