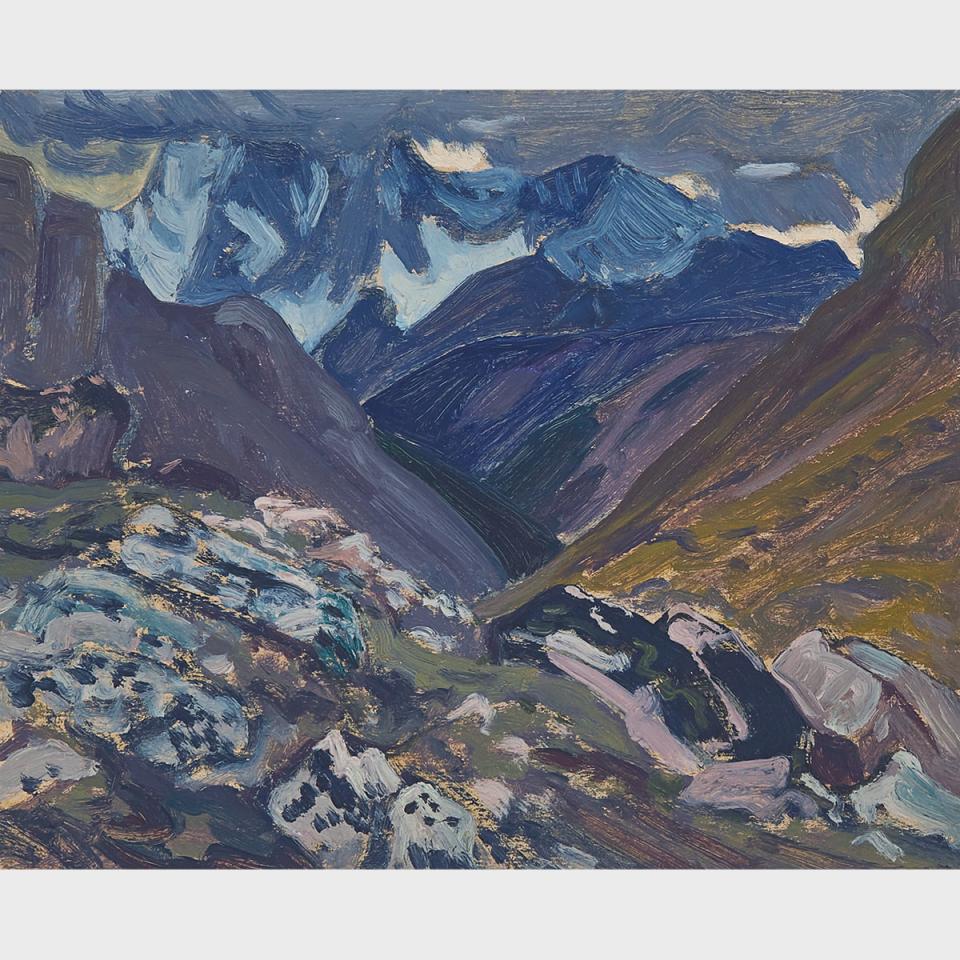 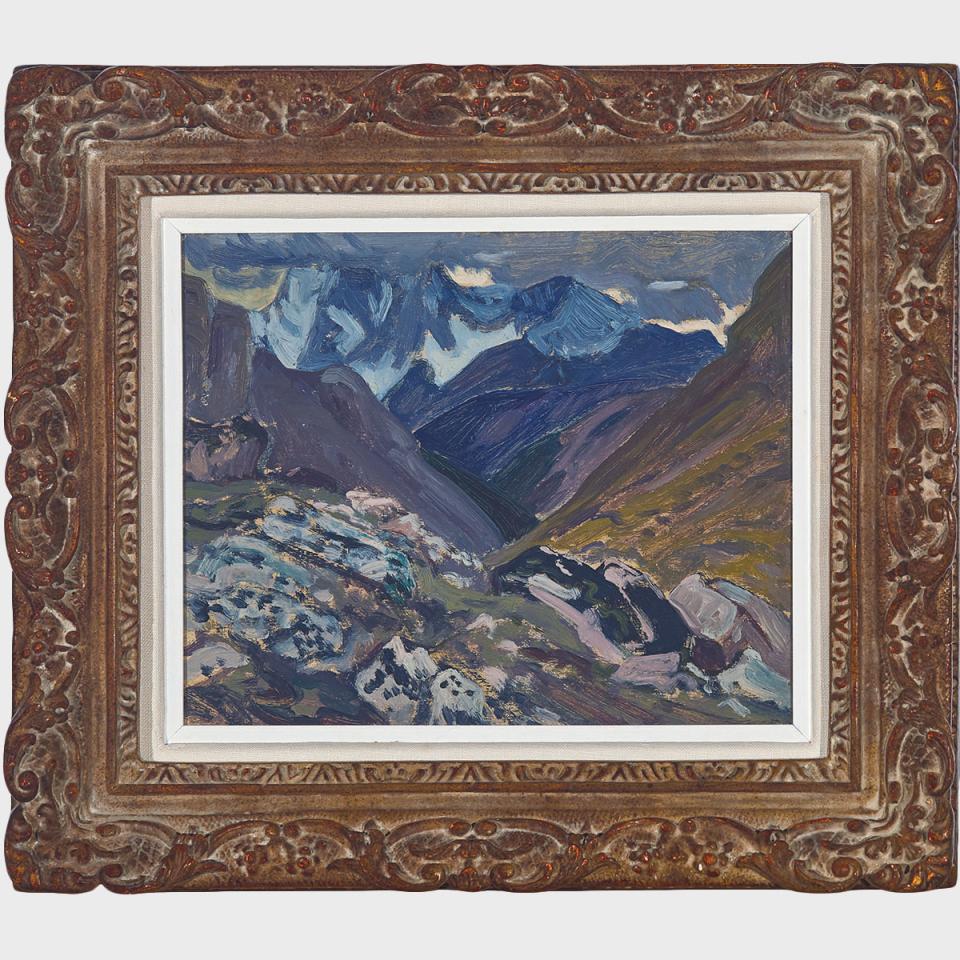 Mt Goodsir is located in Yoho National Park. JEH Macdonald (1873-1932) visited the Rockies for three weeks in late August every year from 1924-1930. These seven pilgrimages, for they can be described as nothing less, stimulated a period of creativity in the poet-painter that resulted in some of his most beautiful oil sketches and a good deal of verse.

The subject of MacDonald's fascination, the Rocky Mountains particularly around Lake O'Hara, were begat by the awesome force of plate tectonics that thrust the earth's crust heavenward to form craggy ranges tens of millions of years ago. Gazing out toward the peaks, valleys and shimmering glacial lakes, MacDonald was both inspired and overwhelmed. Initially, he struggled to adapt a style honed in Algoma, to this contrary and mighty topography. The scale presented novel challenges and MacDonald was uncertain how to resolve this. It was entirely different to his northern Ontario experience. Though it is often the Algoma works which are cited in consideration of MacDonald's contribution to the story of the Group of Seven (as Jackson was to bear the mantle of interpreting Quebec and Harris, the Arctic), Catharine Mastin reminds us that MacDonald would make more trips to the Rocky Mountains than to any other place including Algoma, Georgian Bay and Algonquin Park. Interestingly, Dr. Mastin further notes that MacDonald produced twenty exhibition canvases of the Rockies, more than any other Group artist.

Weather was a significant factor in MacDonald's mountain paintings and many works bear titles that note the inclement conditions he experienced. One of the best known is the early work Rain in the Mountains, 1924 (collection of the Art Gallery of Hamilton), which was shown in the 1925 Group exhibition. In fact, Dr. Mastin asserts that the "ephemeral effects of weather and season were of central importance to MacDonald." Bruce Whiteman, quoting from the artist's journal entry of September 11, 1925, writes: "..soft English mists everywhere & sun glimmering through. Rain at times during the night...Day continued very unsettled however, with many showers and marvelous changing effects of cloud movement among the mts...". It is worth noting the tone of the entry, which is wholly uncomplaining, even celebratory.

That MacDonald returned to the Rockies annually over the course of seven years speaks to a fascination verging on obsession. His duties at OCA left him little leisure time. That he chose to spend what little vacation he was allotted amid the mountains repeatedly is an indication that here he found something that provided more than novel material for the painter but manna that fed a spiritual hunger in the man as well. JEH held a fascination for the American Transcendentalists; his only child, Thoreau, was named after Henry David Thoreau. The isolation of working in the Rockies - many locations from which he painted were extremely difficult to get to - furnished quiet time for reflection in search of truth and knowledge that, while inspired by nature, can only been found within. Transcendentalism identified nature as a key to discovering truth which leads the individual to develop a deeper universal understanding. Christopher Barratta in writing about Thoreau and Emerson describes the Transcendentalists as having moved religion "from the pulpit to the mountain tops." Paintings such as Mt Goodsir are verification that MacDonald had found a distinct locale that provided both the compositional and spiritual challenge he welcomed.