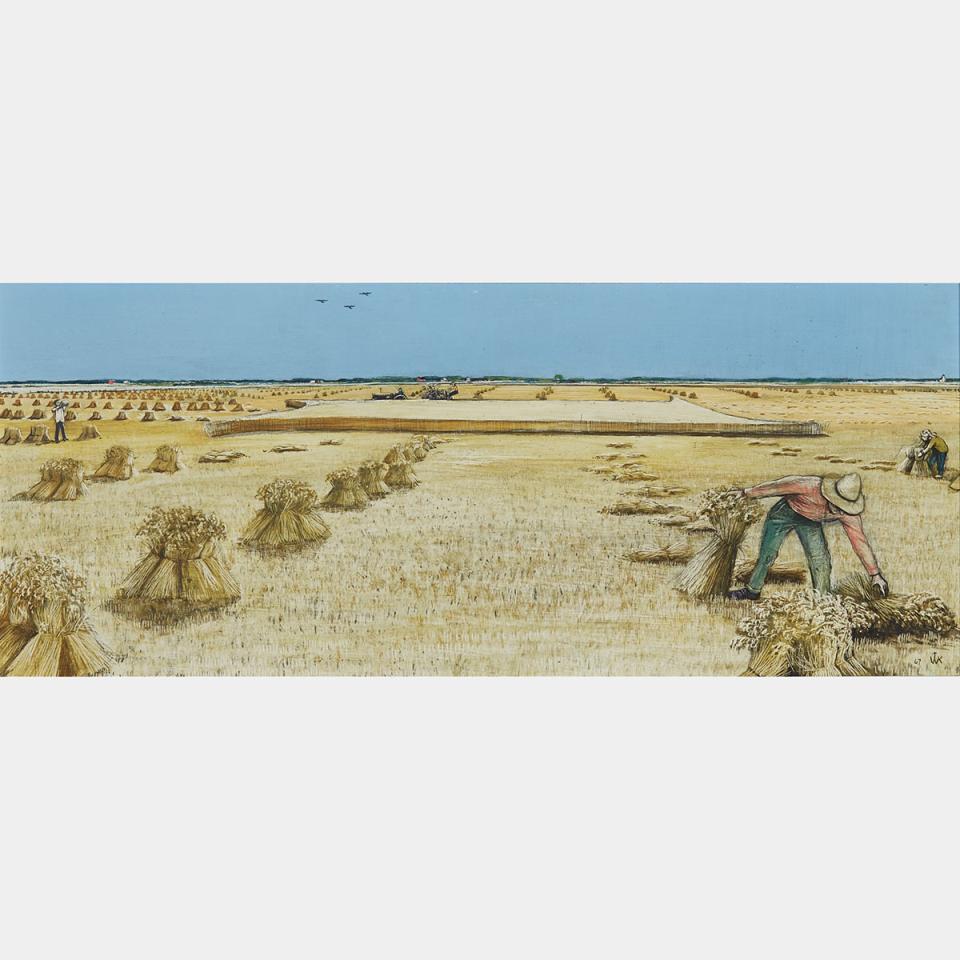 From an early age, Kurelek had wanted to illustrate the history of the Ukrainian people. Throughout his career, he would paint his own family’s story (exhibited in 1964 in “An Immigrant Farms in Canada” at the Isaacs Gallery), his memories of growing up in Western Canada in the 1930s and 1940s, and the histories of other European settlers in Canada. In 1967, he completed a series of paintings dedicated to pioneer Ukrainian-Canadian women which had been commissioned by the Ukrainian Women’s Association of Canada.

Wartime Harvesting near Winnipeg, set on the Kurelek farm near Stonewall, Manitoba, describes in great detail, the labour intensive method of harvesting wheat in the 1940s: a farmer, his wife and a young man (perhaps a son) are shown gathering and bundling the sheaves by hand after the wheat has been cut by machine. The only other figures are the tractor driver and the man operating the reaper. The painting illustrates historical practices that have long since changed due to increased mechanization and preserves them in the present. The vast expanse of field, accentuated by the horizontal format of the picture, shows the extent of the operation, and the aircraft flying overhead in formation indicates the farm’s proximity to a major air force base in Winnipeg, locating the scene during World War II. While the subject of this work is not religious, Kurelek often included a moral message in his rural and secular subjects: in this case, he celebrates the dignity of labour as well as the wartime contribution of western farmers.

On a board prepared with gesso, Kurelek would carefully draw in the composition using lead pencil and ballpoint pen, then apply colour often with a variety of media. The technique that Kurelek used in this work allowed for both a broad panoramic treatment, and areas of detailed drawing in the figures and textured treatment of the stooks and field of stubble. His artistic vision included both the infinitely large and infinitely small.

Acquired directly from the artist
Private Collection, Hamilton (by descent)