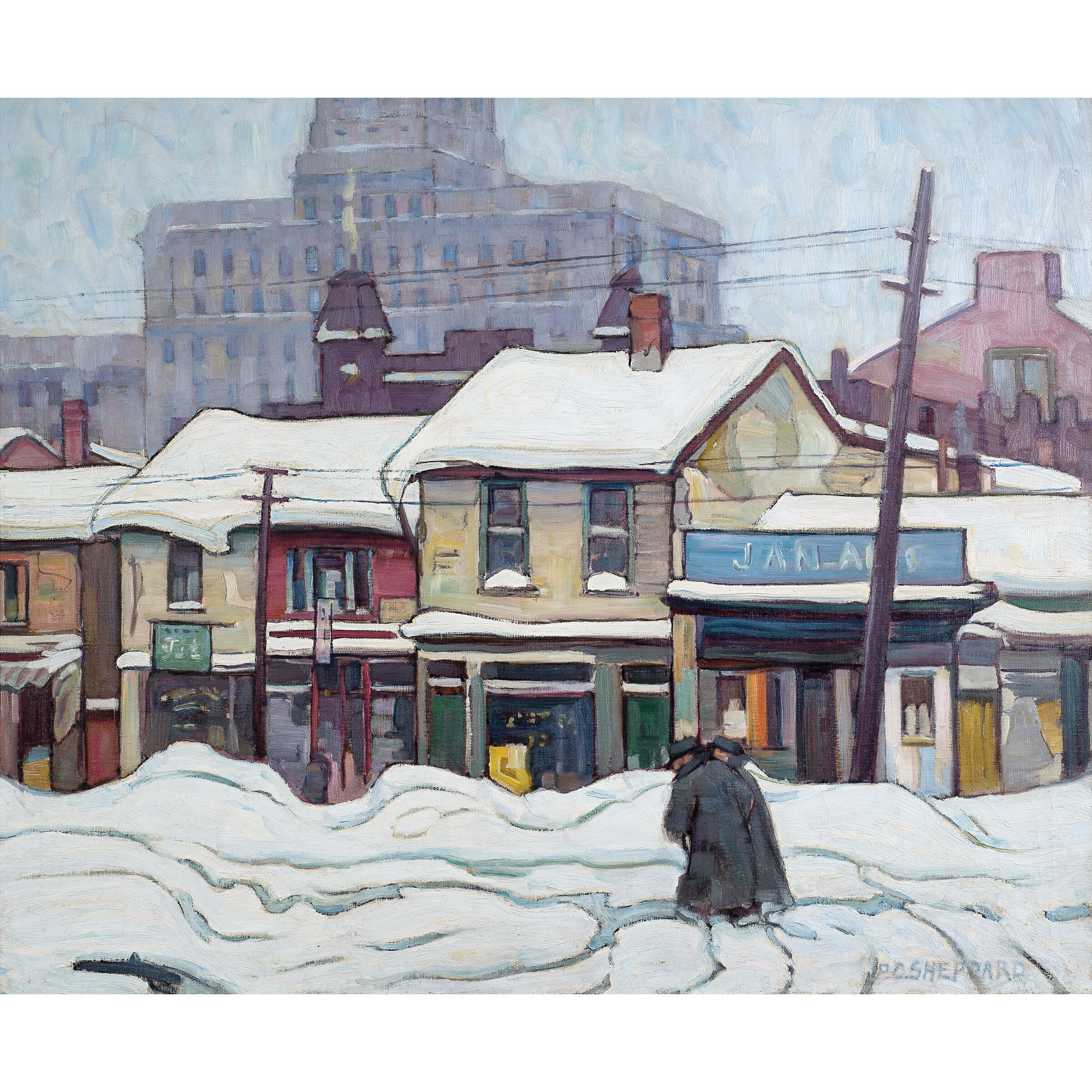 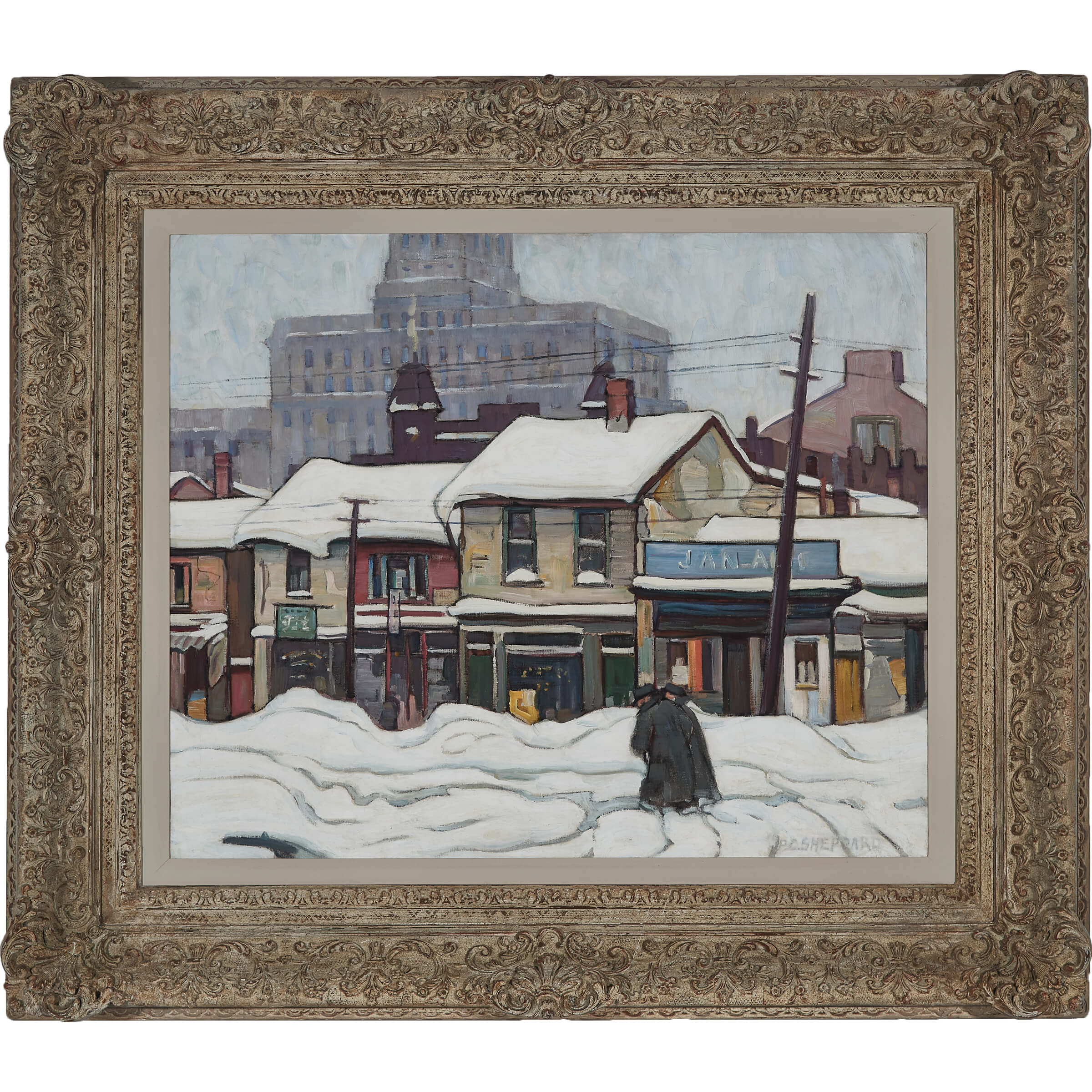 Tom Smart, Peter Clapham Sheppard: His Life and Work, Firefly Books, Richmond Hill 2018, pages 25, 28, 135, 208, page 189, for a detail of this lot, reproduced in colour, as the frontispiece for Chapter 5: Toronto, page 214 for the closely related watercolour of Elizabeth Street, 1930-31 on which this canvas is based, reproduced in colour, page 217 for a discussion of this work, and page 220, for this lot reproduced in colour.

Remarkably, it is only quite recently that the work of Peter Clapham Sheppard (1882-1965) has attracted significant interest of a broader group of serious collectors of important Canadian Art. The reason for this is typically ascribed to the massive shadow cast by his contemporaries, the Group of Seven, who for decades were considered Canada’s greatest fine art innovators, founders of our nationalist school of painting. However, that notion was being challenged even as it was being formulated. When F.B. Housser’s book A Canadian Art Movement was published in 1926, artist W.J. Phillips responded by explaining: “(The Group of Seven) have had a great deal of advertisement, but it generally has been at the expense of other painters.” … “Those of the Seven that I know intimately do not regard their works as the absolute perfection…The comparatives, exaggerated eulogisms, and drastic condemnations (of other art) comes from the less enlightened layman who considers himself a critic”. Nonetheless, the unintended, decades-long consequence of the mythologizing of the Group was that other talented Canadian artists in Ontario and beyond were overshadowed, leaving a dramatic gap in the scholarship.

More recently the space taken up by the Group has ceded some territory to new scholarship whose aim it is to examine those artists – those working outside the major city centres, women artists and First Nations art makers - who were perhaps within the Group’s orbit but who had essentially been relegated to the B team. P.C. Sheppard is now the subject of a major monograph by respected writer, curator and art historian, Tom Smart, whose book on Sheppard was released this fall. Smart argues that artists such as Sheppard “through no fault of their own, and not through the quality of their art, drifted from public consciousness and were forgotten.” Smart’s new publication is an attempt to redress this.

The group of Toronto Ward paintings produced by Sheppard, of which this lot is one of his finest, were executed at the beginning of the 1930s. Sheppard had painted the cities of Montreal and New York a few years earlier. Upon returning to Toronto, he turned his eye to a relatively poor neighbourhood rich in subject matter that had also attracted Lawren Harris who himself had immortalized the subject. Like Harris, Sheppard sought to capture the Ward's “gritty working class streets (particularly Louisa and Elizabeth Streets), alleys, houses and shacks as portraits of resilient survival in places defined by transition and impoverishment.”

Smart notes that Sheppard’s composition of Elizabeth Street: "juxtaposes the domestic and commercial nature of the subject... the row of hardscrabble houses and businesses cobbled together, weighted down by the heavy burden of snowfall as well as by the looming towers of the commercial district beyond.” In the distance, Sheppard incorporates a newly minted skyline featuring the “looming” outline of the fifteen storey, beaux-arts style beauty, the Canada Life Building, whose construction started in 1929 and was completed in 1931.

Smart notes that the composition of Elizabeth Street uses a device that Sheppard established while painting in New York. “The composition divides the format horizontally in two ranks: above the divide is an anonymous cityscape of towering commercial buildings and skyscrapers, while below is the urban hurly-burly of boisterous activity, horse and carriage traffic and pedestrians.” Smart further notes that “contrasts abound in the painting between the natural and the built: the human-scaled houses and the gargantuan commercial buildings; snow and stone; geometric and lyrical lines.” Smart also maintains that it is large format paintings, such as this lot, “that give wider fields for Sheppard to display his talent and imagination as he interpreted the rapid industrial and social growth” of cities like Toronto. The result is that Elizabeth Street is a tour de force of expression, making great use of an array of colour (mauve, violet, plum, alabaster, almond, oyster, ruby, crimson, scarlett, canary, amber, teal) and brushstroke.

Copies of Tom Smart’s new publication, “Peter Clapham Sheppard: His Life and Work”, are available for purchase from Waddington’s during our auction preview and sale.