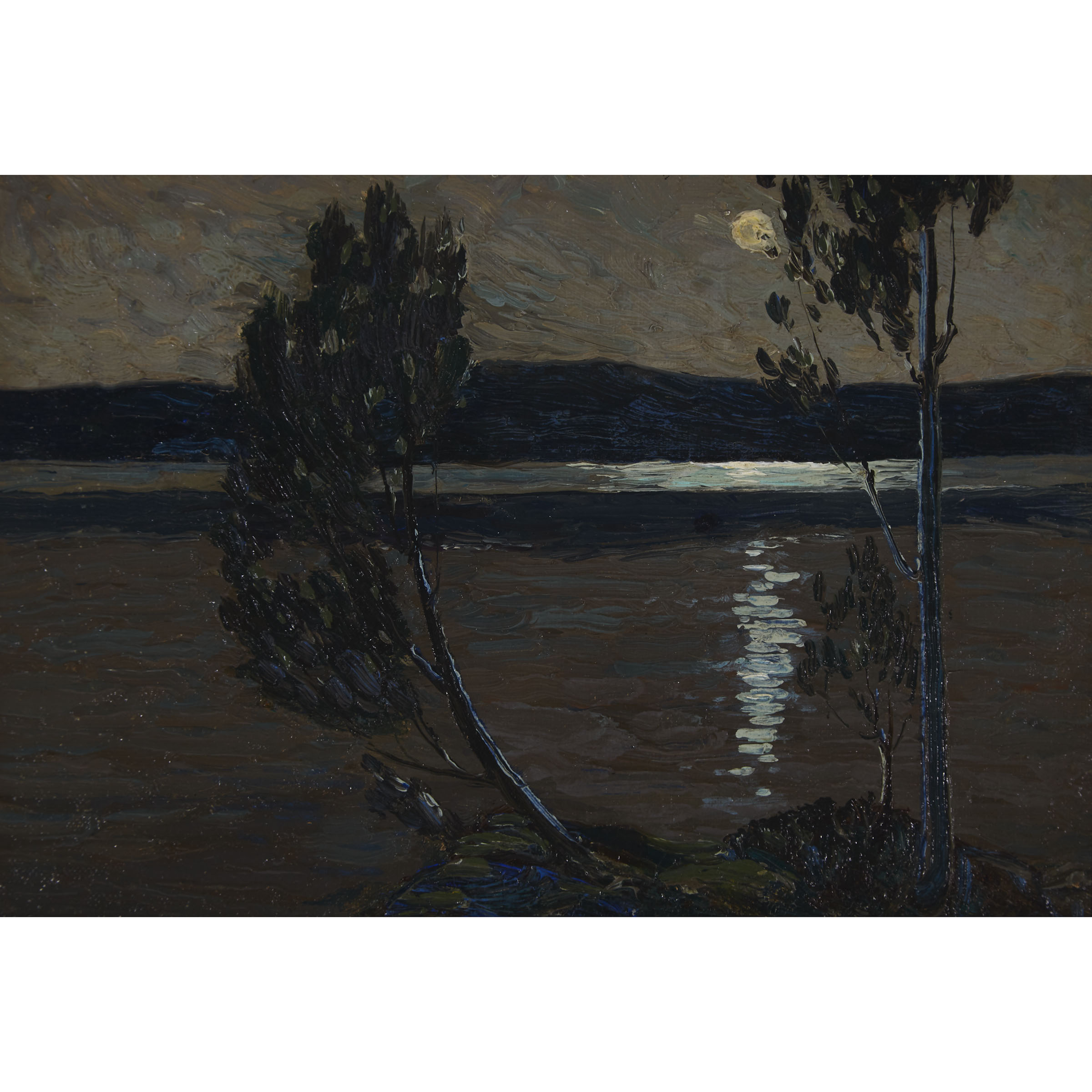 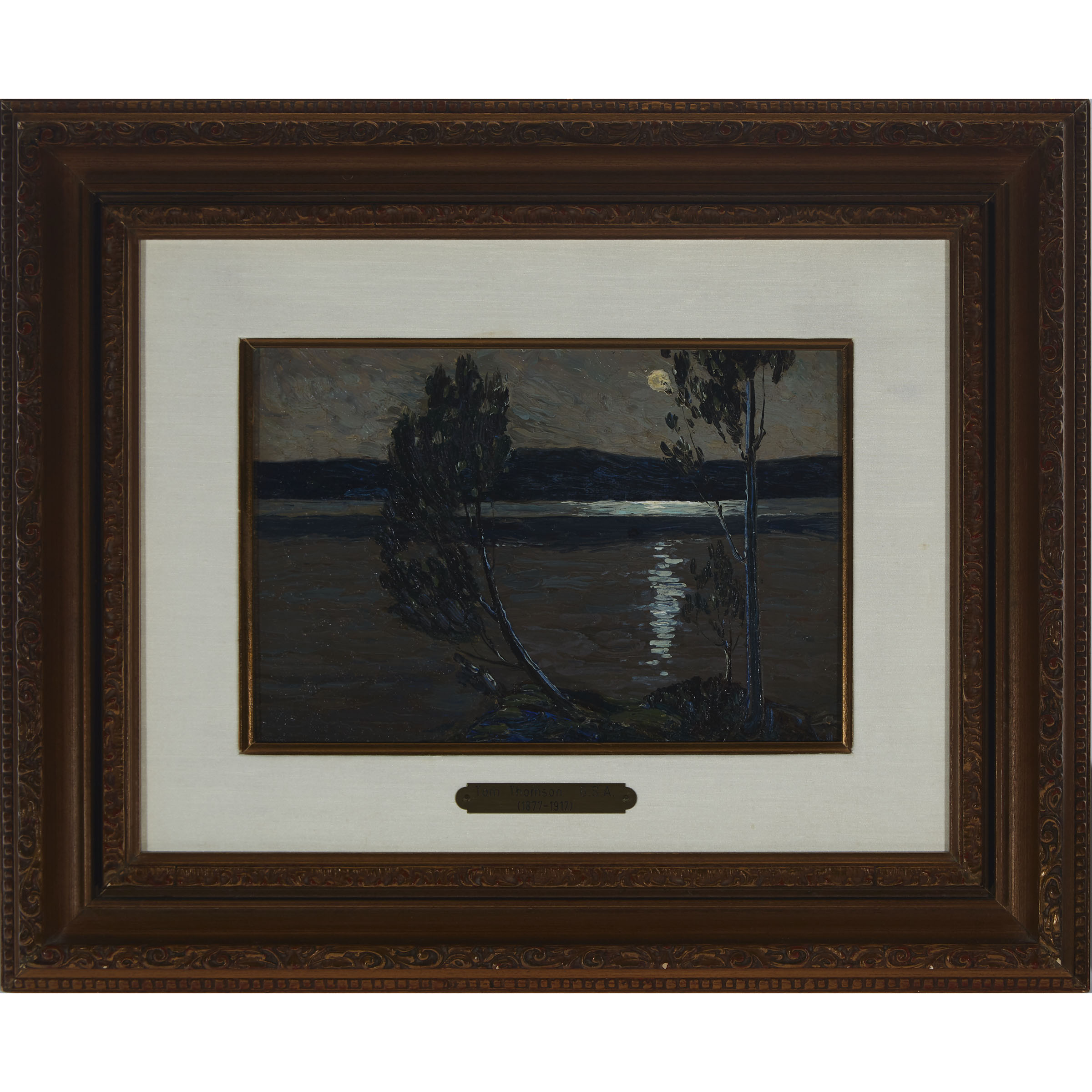 Tom Thomson’s early paintings around 1912 and 1913 are often marked by a dark tonality and sensitive handling. He had not yet heard the clarion call of Impressionism. A Quiet Summer Evening and Late Spring reveal the direction of his course.

He was invigorated and inspired by the northern landscape, a subject he discovered, it seems, by chance. In 1912, after a visit Thomson had made to Algonquin Park, he and a colleague, William Broadhead, went on a two- or three-month expedition up the Spanish River and into Mississagi Forest Reserve (today Mississagi Provincial Park). It was on this trip, as A.Y. Jackson wrote later, that Thomson started to paint.
The course of the trip was recorded by Thomson himself. In a letter to a friend, M.J. McRuer, Thomson wrote:

“We started in at Bisco and took a long trip on the lakes around there going up the Spanish River and over into the Mississauga [Mississagi] water we got a great many good snapshots of game—mostly moose and some sketches, but we had a dump in the forty-mile rapids which is near the end of our trip and lost most of our stuff—we only saved 2 rolls of film out of about 14 dozen. Outside of that we had a peach of a time as the Mississauga is considered the finest canoe trip in the world.”1

Thomson’s local newspaper, The Owen Sound Sun, added to this enthusiastic account that it rained most of the time and the two men capsized twice. However, the adventure they were on added to the thrill of discovering the grand scenery of the Park as well as other places on their route. When they made it home to Toronto, Thomson joined the commercial art firm of Rous & Mann, and met future members of the Group of Seven such as F. H. Varley, and Dr. J.M. MacCallum, co-founder of the Studio Building with Lawren Harris, who became his friend and patron. Thomson showed these friends the sketches he had made on the trip and was showered with praise. Everyone agreed that he had caught the real northern character.

Late Spring has the sombre, dark tonality of sketches related to this trip. In this work, he does not get bogged down in minute details but delicately and sensitively handled the bare branches of the trees and sets the land masses and trees securely in their spaces. He indicated the structure of the land by small flecks of paint and the sky above and its layer of cloud by uneven horizontal bands of blue-grey and off-white. As in another work of 1912, Thomson used the trees on either side as a framing device, here, for a distant bridge or culvert and a stretch of blue water. In these lyrical early conceptions, Thomson discovered the kind of thinking about art that he often would use later. Late Spring is in embryo one of the sources for paintings such as Thomson’s majestic Woodland Waterfall (McMichael Canadian Art Collection, Kleinburg).

One more word about Late Spring: it is not likely to have been painted in 1913 when Thomson went north again since Jackson wrote of the sketches done that year that there were no “wood interiors” in the group that he saw that autumn.2 Yet Late Spring provides striking evidence of Thomson’s increased skill in composition when compared with a sketch such as Mississagi (1912.29) which he painted on his trip. Perhaps Thomson essayed some sketches when he came home from memory or when visiting his family in Leith.

The path Thomson took in art involved digesting painting lessons learned from teachers such as J.E.H. MacDonald, his ‘boss’ in the commercial art firm of Grip Ltd., and Harris whom he had met at MacDonald`s show at the Arts & Letters Club in Toronto in 1911 and of course, from his training in design. These sources offered something of a guide too.

With remarkable speed, Thomson’s handling of paint strengthened, his composition grew more powerful and he gained more confidence. A Quiet Summer Evening, created in the summer of 1913, is a night-time scene but even so, Thomson used a lighter palette in it than in Late Spring. The handling of the sky and water is more modulated, the branches of trees and foliage crisper. As in Late Spring, Thomson introduced a lyrical element, here the moon which glamorously lights the sky, water and trees. Though of approximately the same size as Late Spring, this sketch is so well designed that it seems larger, at least in reproduction.

Thomson was in his own way a determined modern artist. He did not want his work to be viewed as part of a tradition unless that tradition was of something new, and he was working intelligently and ambitiously towards that new form of expression. These works are proof that he found much that was exciting and challenging in the northern landscape that he wanted to convey and applied it to his work. Perhaps that is why his art still proves so compelling to viewers today.

We thank Joan Murray, art historian, author of the Tom Thomson Catalogue Raisonné and many books on Tom Thomson, for contributing this essay.