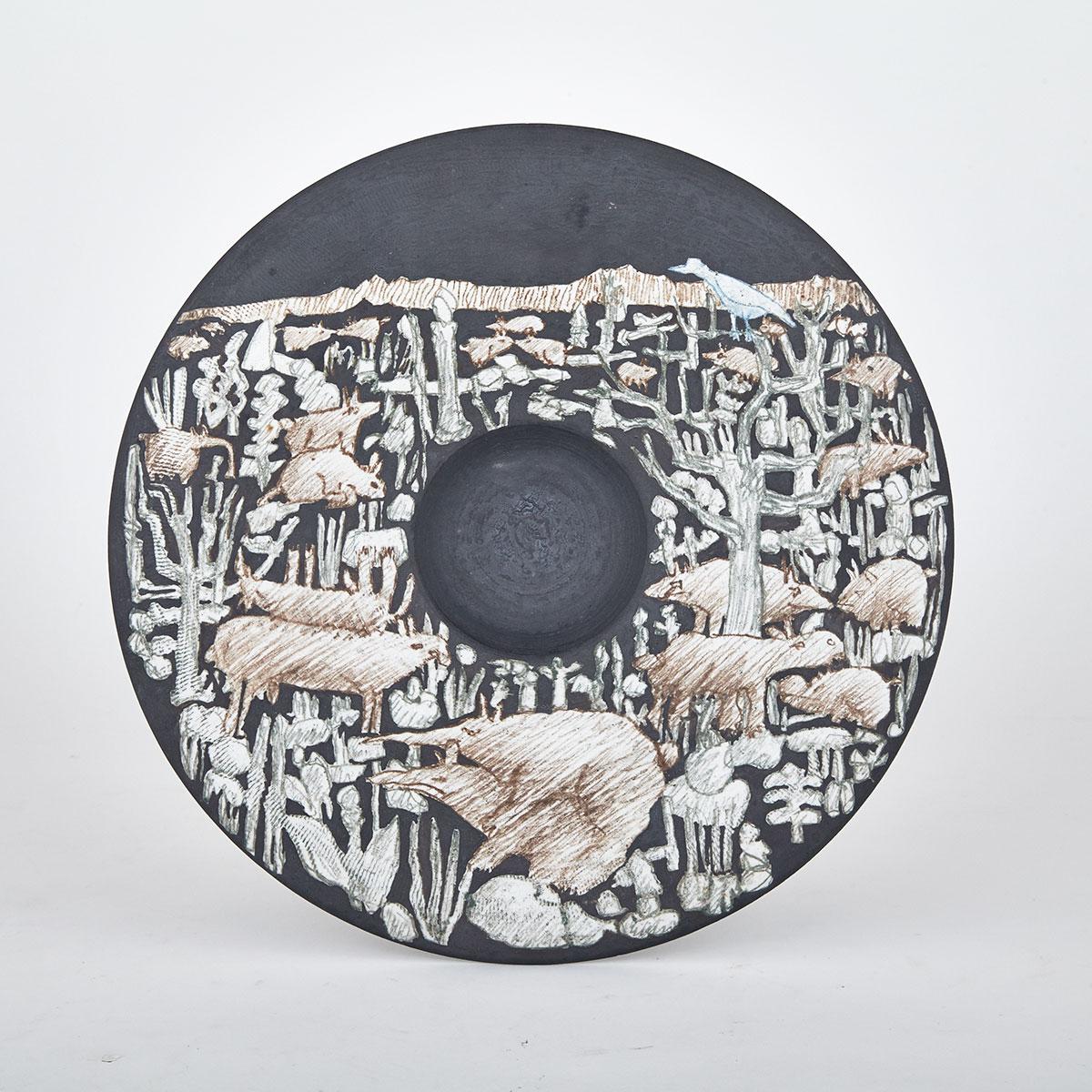 “My love of clay as an expressive material, with its innate ability to create any and all other materials, its ability to reinvent itself every time it is touched, has endowed my life with a richness and completeness that few people seem to achieve in their lifetimes. My hope is that this richness and completeness is reflected in the work and this spirit is transferred to the viewer.”

Manitoban Jack Sures is one of Canada’s most celebrated ceramic artists and
educators, known for his ceramic sculpture and murals in diverse media including stoneware, porcelain and raku. His work is both whimsical and humorous, often portraying a caricature of human behavior. His trademark bandicoots, or “beasts” as Sures refers to them, often figure in many of his ceramic works.

Jack Joseph Sures was born in Brandon, Manitoba, in 1934, the son of Russian Jewish immigrants. He attended the Winnipeg School of Art under the tutelage of Canadian artists, George Swinton (RCA) and Robert Nelson. He received his Bachelor of Fine Arts in 1959 from the University of Manitoba and continued on to obtain a Master of Arts, with a double major in painting and printmaking, from Michigan State University. During this time, he took one ceramics course, which was the impetus that initiated his largely self-taught career in clay.

Sures moved to London, England in 1960, where he worked part-time at the Chelsea Pottery, practicing his skills as a thrower. After traveling throughout Europe and the Middle East, he returned to Winnipeg in 1962 to set up his own pottery studio. Within two years of opening, he received a commission to create a mural for the School of Architecture at the University of Manitoba. In 1965, Sures was given the opportunity to establish the Printmaking and Ceramics programs at the University of Saskatchewan’s Regina Campus. In 1969, Sures became the Chair of the Department of Visual Arts at the University, shifting his focus from teaching to printmaking, all the while continuing to create ceramics, including murals. He also exhibited across Canada and the United States. It was also during the late 1960’s to the mid 1970’s that the Regina Clay Movement was started. Sures, along with Joe Fafard, David Gilhooly, Lorne Beug, Marilyn Levine and others, dissociated themselves with the mid-twentieth century modernism, in favor of the pop movement style that emerged from California. Sarcasm, wit, and personal expression were the essence of their art.

Sures received numerous accolades and awards during his career. Supported by a Canada Council grant, only the third such grant to be awarded to a ceramic artist, he travelled to Japan in 1966 to study its culture and ceramics. In 1972, Sures received his second Canada Council Grant to work at the French studio of Albert Diato, a friend of Picasso’s, and in 1973, he was appointed by the United Nations International Labour Office, Handcraft Development Program to set up a ceramics program on the Caribbean Island of Grenada. Sures' ingenuity shone through when he engineered a kiln that could use nutmeg shells from the abundant local resource as its fuel.

Sures returned to Regina in 1975 to teach ceramics. He continued to exhibit his work and received large commissions including an outdoor mural at the Sturdy-Stone Building in Saskatoon in 1978, that was a huge project covering 884 square meters. In 1987, he won a competition for a mural at the new Canadian Museum of Civilization in Gatineau, Quebec, and in 1989, Sures received the Grand Prize at the Second International Ceramics Competition in Mino, Japan, the foremost international ceramic competition held in Japan every three years. He had created a thirty by twenty-four meter wall sculpture using the leftover tiles from his mural at the Canadian Museum of Civilization. In 1991, he was appointed a Member of the Order of Canada, being recognized for a lifetime of outstanding achievement and dedication to the community and service to the nation. He was elected to the International Academy of Ceramics that year as well.

In 1998, Jack Sures retired from the University of Regina, having served thirty years teaching, with the honorary title Professor Emeritus. In 2003, he was awarded the Award of Merit, Saskatchewan’s highest honor. Sures lives in Regina, where he continues to create in his own studio and exhibit his work.