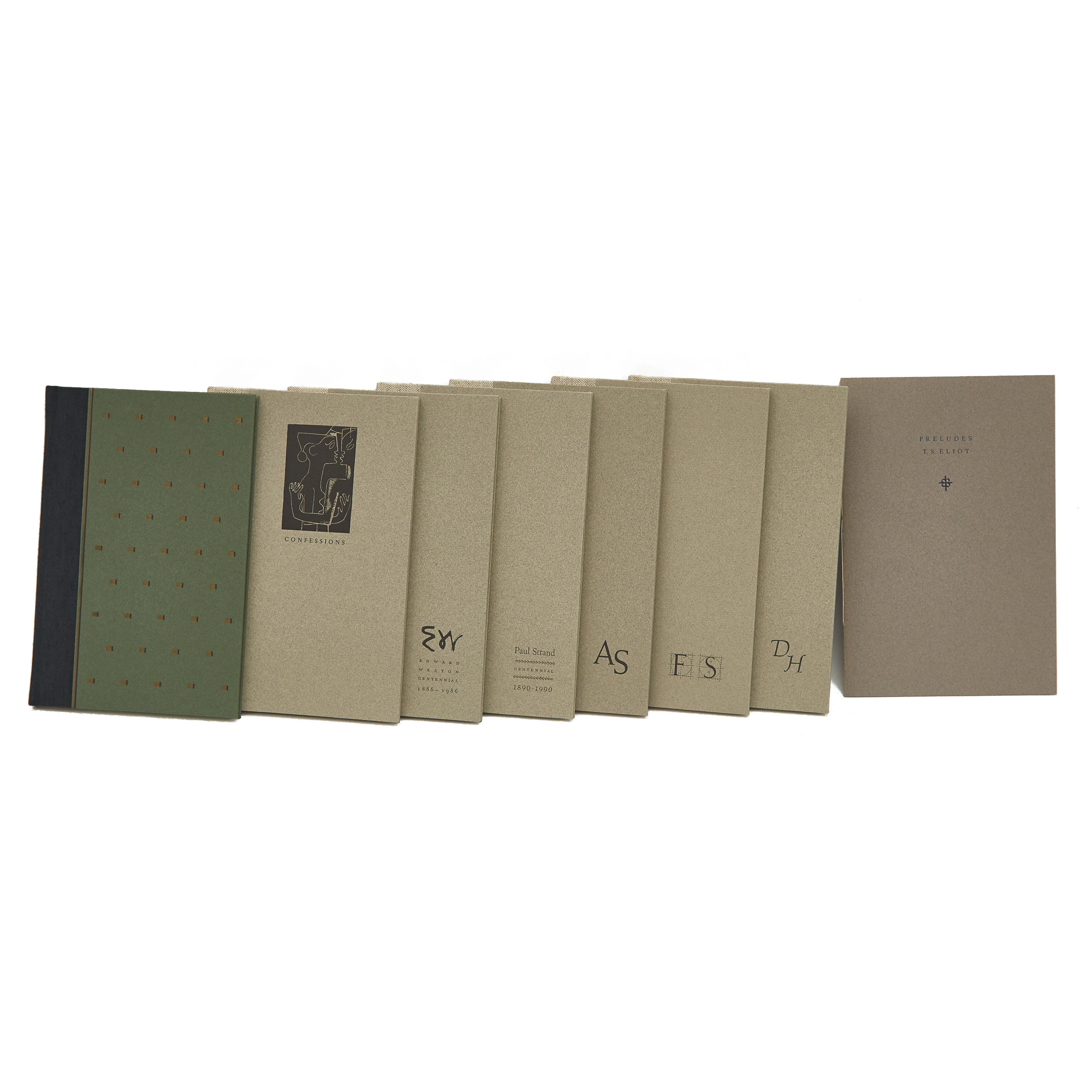 EIGHT FINE PRESS PHOTOGRAPHY BOOKS, ALL OUT OF PRINT, TITLES INCLUDING:

1.
"The Witkin Gallery 25
A Celebration of Twenty Five Years of Photography in New York City", 1994. Portfolio selected by Evelyne Z. Daitz; introduction by Peter C. Bunnell. Twenty-six halftone reproductions, two of which are tipped in, by various photographers. Black Canapetta cloth spine with green Canson paper patterned in gold over boards. Numbered H/C in pencil to the colophon, aside from the edition of 250.

5.
Aaron Siskind (1903–1991), American
“The Siskind Variations”,1990
There are 26 lettered and 190 numbered copies; illustrated with two original silver gelatin prints from the negatives, both portraits of the photographer. One of 190 copies, autographed copy, signed by Siskind and dated 4/26/90 in pen and ink to the opening page opposite the title page. Numbered 17/190 to the colophon.

6.
Frederick Sommer (1905–1999), American/Italian
“The Constellations That Surround Us, The Conjunction of General Aesthetics & Poetic Logic in an Artist's Life”, 1992. Illustrated with four tipped-in gelatin-silver prints: a rare portrait of Sommer by Edward Weston, and three various images by Sommer. Edition 200, May 1992, Homage Volume VI. Numbered 169/200 to the colophon.

7.
David G. Heath (1950- ), American
“Extempore, Reflections & Ruminations on Art & Personal History”, 1988
Two previously rare, unpublished photographs: portrait of Heath and an image by Heath from 1951, printed on gelatin-silver paper and tipped in, further illustrated with a half-tone reproduction of one of Heath’s hand-rendered layouts for a sequence from ADWS. Edition 150 copies, May 1988, Homage Volume III. Numbered 137/150 to the colophon.

8.
T.S. Eliot Preludes, 1987
“Preludes”, 1987, A poem by T.S. Eliot" with photograph by Michael Torosian. Eight pages.
A single special edition published for friends of Lumiere Press in appreciation of their support. Signed by Michael Torosian and numbered 4/100 to the colophon

Six titles, nos. 2 to 7, are quarter bound in natural linen and Canson paper over boards in the uniform style of the series. The last, with grey paper cover.

Lumiere Press, Toronto, accompanied by one original receipt for the Paul Strand book, dated 5 August 1991;
The remaining books, gifted directly from Michael Torosian to the present Private Collection, Oakville, ON, former neighbour of Michael Torosian and first proof-reader for his publications for Lumiere Press.

The Witkin Gallery is credited with the launch of photography to public consciousness and collector interest in the 1970s.

Contemporary bookmaker and photographer Michael Torosian established Lumiere Press in Toronto in 1980. It began as a small private press and the only fine print book press devoted solely to photography.