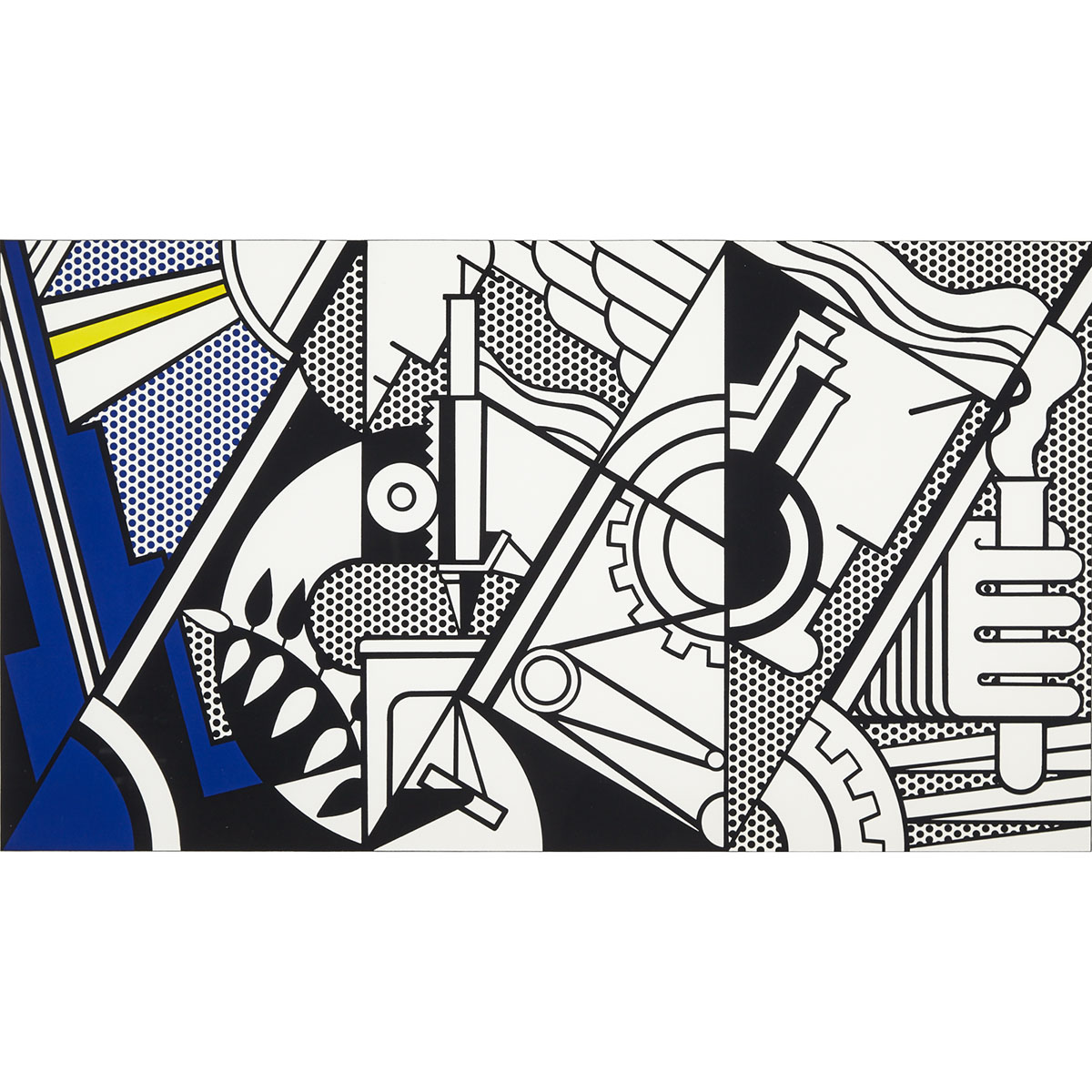 Peace Through Chemistry IV brings the world of scientific innovation to life through Roy Lichtenstein’s illustrious Ben-Day Dots art form – printmaking is the perfect media to bring forth the graphic impact and mechanized aesthetic that is richly attributed to the artist’s work. “Handmade and readymade” were the words used by artist and critic Brian O’Doherty describing Lichtenstein’s art, which equally extend to Peace Through Chemistry IV. Produced at Gemini G.E.L. in Los Angeles, California where Lichtenstein collaborated with the coveted printmaker Kenneth Tyler.

As printmaking flourished in America during the 60’s, a rich outpouring ensued beyond the traditional printmaking techniques. Artists became well acquainted with commercialized print methods such as silkscreen and offset lithography—further supporting this new age of art making.

Peace Through Chemistry IV displays a beautiful and innovative sequencing, where objects in one quadrant morph into another that is all together modern, and equally speaks to Lichtenstein’s genius as an artist. The Art Deco style, became a core influence for Lichtenstein between the years 1966 and 1970 - a movement that wove together through the visual language geometrical forms and technical advancements. “Lichtenstein was attracted to Art Deco because of its avid yet irrational hunger for heroic industrial forms.” (Hendrickson, 2001 p. 63) Peace Through Chemistry represents this exact enunciation.

The left section of the print is subtly brought to the viewers’ attention by the use of colour (deep navy and canary yellow hues) contrasting the remaining composition’s monochromatic hues of black and white. A dazzling modern skyscraper with the yellow flash of bright city lights demonstrably showcase the awe of such an architectural feat. Working in New York, Lichtenstein was continually influenced by the motifs and stylized City’s skyline – Peace Through Chemistry IV, behaves in an architectural fashion reminiscent of an architectural frieze or bas-relief that exhibits both a shallow, yet sculptural quality. A powerful narrative plays out amidst an array of core scientific instruments, such as a microscope, gears, test tubes as well as those who are driving the innovation. From the figure’s hair to smoke emanating from the test tubes, the undulating lines relate to the streaming speed lines that defined the Art Deco style. The overall composition – celebrates the advance of innovative progress.