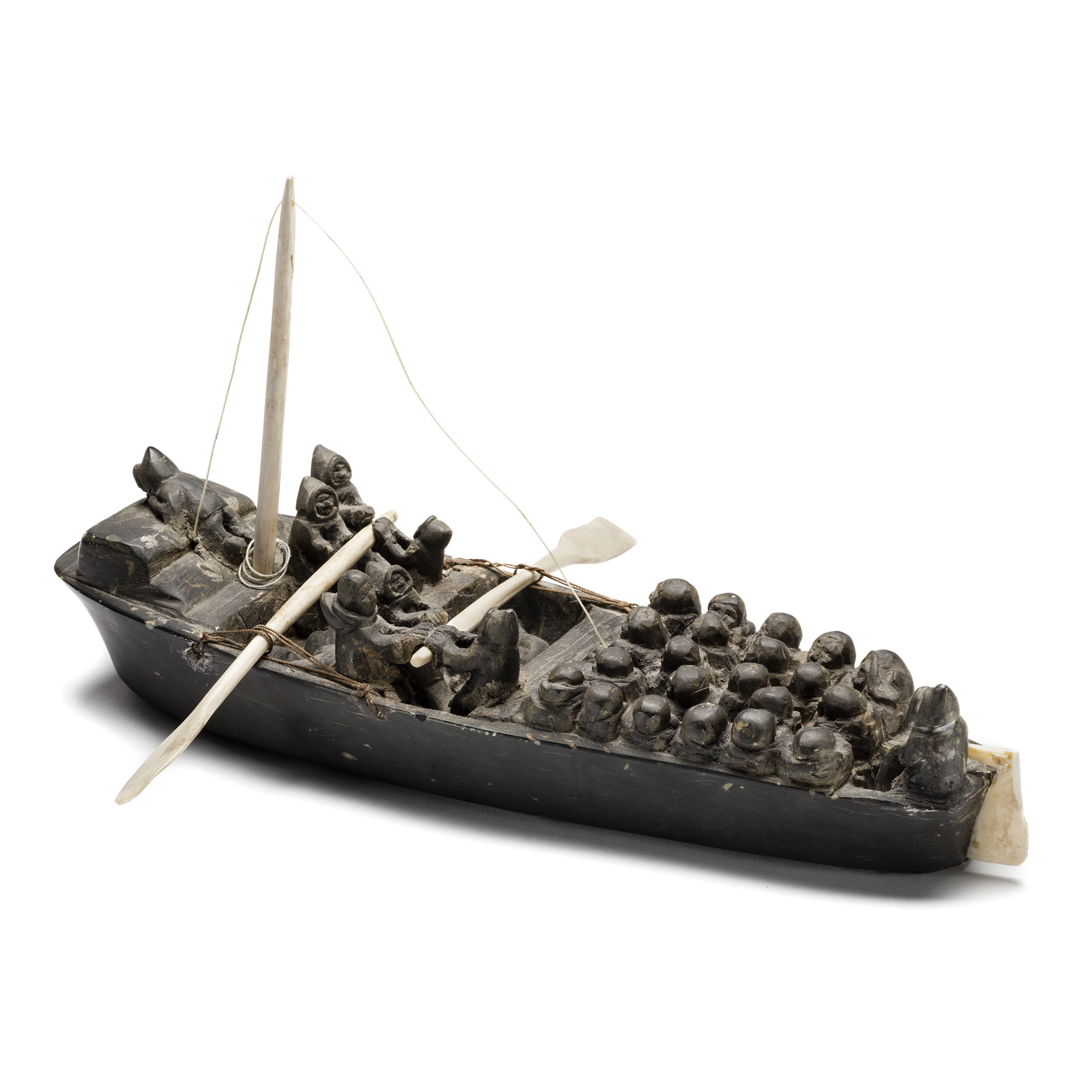 Ennutsiak was the almost exact contemporary of the Puvirnituq sculptor Joe Talirunili, and like him adopted a carving style that could be described as rustic realism. Ennutsiak began carving probably in the early 1950s and sold many of his works to a ready local market that included American servicemen and people constructing NORAD’s DEW Line at the height of the Cold War. Ennutsiak is perhaps most famous for his tableau-style birthing scenes but also created scenes that depict hunting, flensing marine mammals, travelling on the land and even bible reading, as well as occasional single human and animal subjects. This Umiaq Migration is among his largest and most ambitious creations.

Interestingly, Ennutsiak was born in Arctic Quebec and moved to southern Baffin Island in the earlier part of his life (we know that he raised his own family on Baffin). The ocean voyage across Hudson Strait (a distance of well over 100 kilometres) would have been a major undertaking, especially since it was made by umiaq, a sealskin boat. This makes the parallels with the life and art of Joe Talirunili all the more intriguing and poignant.

Ennutsiak’s Umiaq Migration is unlike Talirunili’s boat in several ways. Notably, the design of the boat itself is quite different, and for good reason. Ennutsiak’s boat follows the classic Nunavik design and construction (which, interestingly enough, can be clearly seen in two old photos reproduced in Marybelle Myers’ book on Talirunili, (FCNQ, 1977). We should remember that Ennutsiak’s community had the time to build and outfit a proper boat for their migration voyage, while the boat in Talirunili’s adventure was jerry-built in an emergency. Ennutsiak’s umiaq is powered by oars instead of paddles and is fitted with a rudder (but would have made use of a sail as well, as required). Clearly this was a more organized voyage, though it may have had its perils as well. The boy or man at the bow might be Ennutsiak himself, possibly looking out for dangerous rocks or shoals.

While lacking the expressionistic punch of Talirunili’s harrowing tale of adventure, Ennutsiak’s Umiaq Migration is equally engaging and lovingly executed – a rare tour de force by another of Inuit art’s elder master carvers.