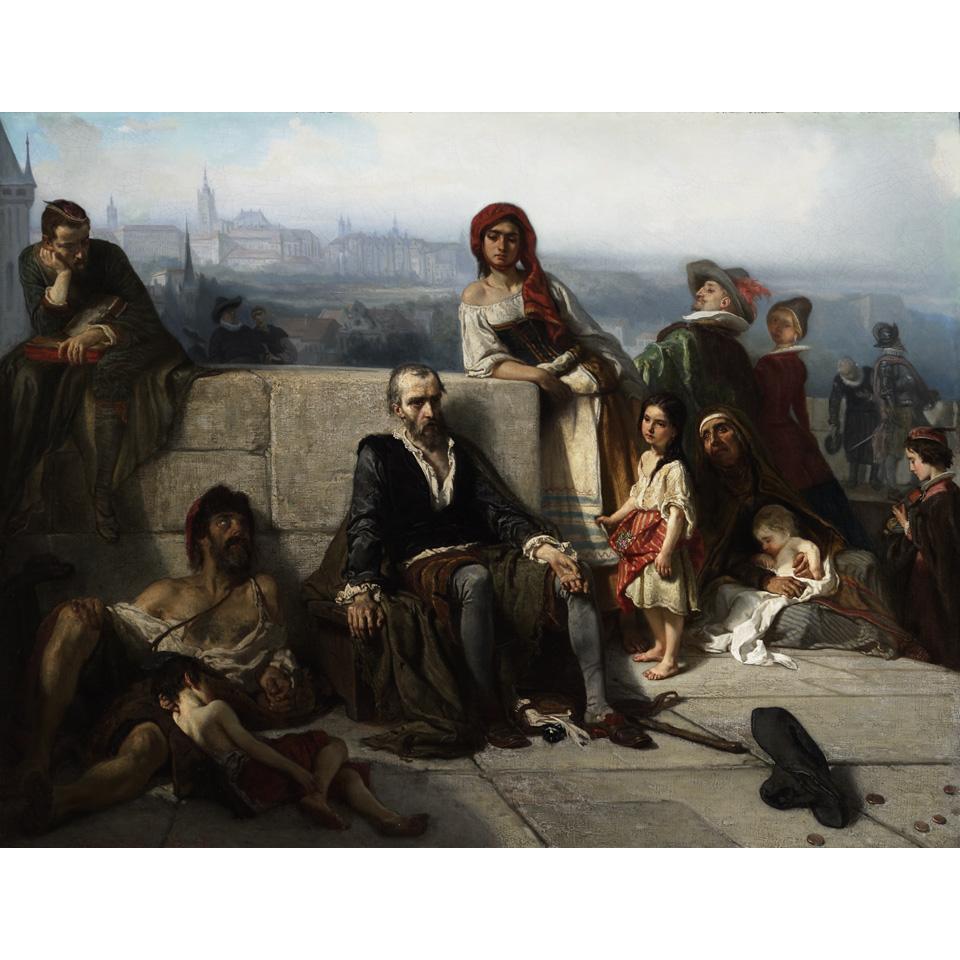 This impressive, large scale history painting by Cermak is a recorded work, titled through translation in some literature in the public domain as “Poet Lomnicky as a Beggar on the Bridge of Prague, 1852”.

The scene is based on a historic moment described in: “The Poet Lamnizky” from “The Reformation and Anti-Reformation in Bohemia”, Vol. I, p. 438, C.A. Pescheck/ D. Benham in the public domain:
Simon Lomnicky (born 1560) was the poet-laureate of the Emperor Rudolph II under whose government Simon lived very happily and made many accomplishments in making Prague a literary and artistic center. But afterwards under the power of Frederic, he published “certain poems ... he was apprehended and though more than 60 years of age, condemned to receive 100 lashes. He hardly got away alive, and afterwards to beg his bread upon the Bridge of Prague”.

Although this lot is dated 1853 and 1854 on the nameplate, the “Czernin” provenance identified on the exhibition label (the Czernin Gallery, Vienna) confirms that this is the same painting recorded in the literature of the time to have been in the possession of the Czernin Gallery in Vienna.

Cizozemske Celni Zbozi printed label inscribed in ink: “Praha ...” to the frame;
Indistinct name: “S. (or J) Ehoe...Czernin” (Czernin Gallery, Vienna) handwritten in Czech script to the “Vom Local-Comite in Wien” exhibition label to the frame verso;
Private Collection of Fritz and Lilly Shaecter, Budapest, until the late 1940’s, thence to Queens, New York with them in 1949;
Gifted to Robert and Koka Wollman (the Broadway singer and actress, Julieska (Juliette) Koka) in 1987;
Juliette Koka’s Estate until May 2011;
By descent to the present Private Collection, New Jersey

Note to the Provenance:
Fritz Shaecter was an accomplished orchestra conductor in Budapest. According to the family, the painting travelled with the Shaecter’s to the United States when they moved to their new residence in New York in the late 1940’s. The painting remained with the Shaecter’s for nearly four decades until gifted to the present owner’s family in 1987 and has not been on the market while held in this Private Collection.