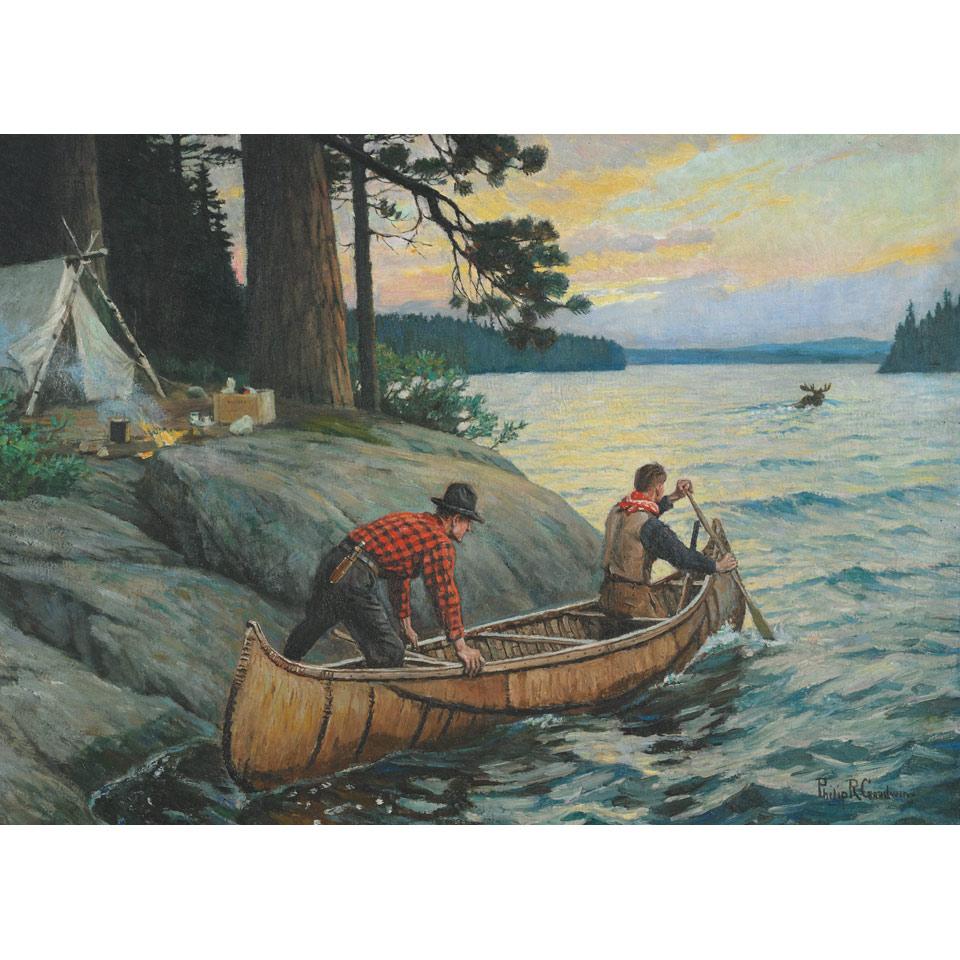 Goodwin’s oil paintings are rare. Peterson reports that once Goodwin’s works were completed, the finished oil was sent to the publisher and then assigned to a printer to create the illustration. Once used, usually the large 24” x 36” size works were put into storage to gather dust and were forgotten, with many being tossed into an incinerator when companies moved or renovated. Up until this time, the whereabouts of “The Big Thrill” canvas was unknown, aside from the vintage colour reproduction prints that were published and documented in Peterson’s book.

Peterson relates: “One of Goodwin’s favorite pastimes was canoeing. Goodwin’s paintings often depict canoe travel as the primary mode of transportation”.
It is known that Goodwin was most intrigued by the North American Indian lifestyle. In September of 1906, Goodwin travelled to the old Hudson Bay trading post site at Lake Temagami, Ontario: “the country of the canoe; the camper’s paradise, providing the perfect setting to photograph and sketch the native people”. With his love of the Indian lifestyle and the untouched grandeur of the “ancient and honourable Hudson Bay Co.’s post.” with its “pure perfumed air” and “some of the most beautiful country I have ever been in”, it is no wonder that Goodwin chose a birch bark canoe for “The Big Thrill”

Alex Hattie, the former owner of this painting, worked for Matthew James Boylen (1907-1970), the Canadian businessman, art collector, thoroughbred racehorse owner, prospector and founder of Brunswick Mining and Smelting Corp Ltd. in Bathurst, N.B. Hattie worked for Boylen as a gold prospector in northern Ontario and Manitoba and discovered mines that Boylen developed. It is not known in what year and from whom or where Hattie obtained the painting, however, according to the present owner, Hattie liked the painting because it put him in mind of his camp sights in the North when he was prospecting. Hattie may have purchased the painting at the Haynes Fine Art Gallery, Toronto. In 1959 Boylen was a founding donor to the Beaverbrook Art Gallery in Fredericton, New Brunswick, donating twenty-two paintings by Canadian artist Cornelius Krieghoff. Boylen died in Toronto in 1970. It is also possible that Hattie received the painting from Boylen earlier in his lifetime.

With Haynes Art Gallery, Toronto, n.d.;
Alex Hattie, Northern Ontario and Manitoba until circa 1971;
Gifted by Hattie to the present Private Collection, Ontario who has held the painting for 40 years, since circa 1971