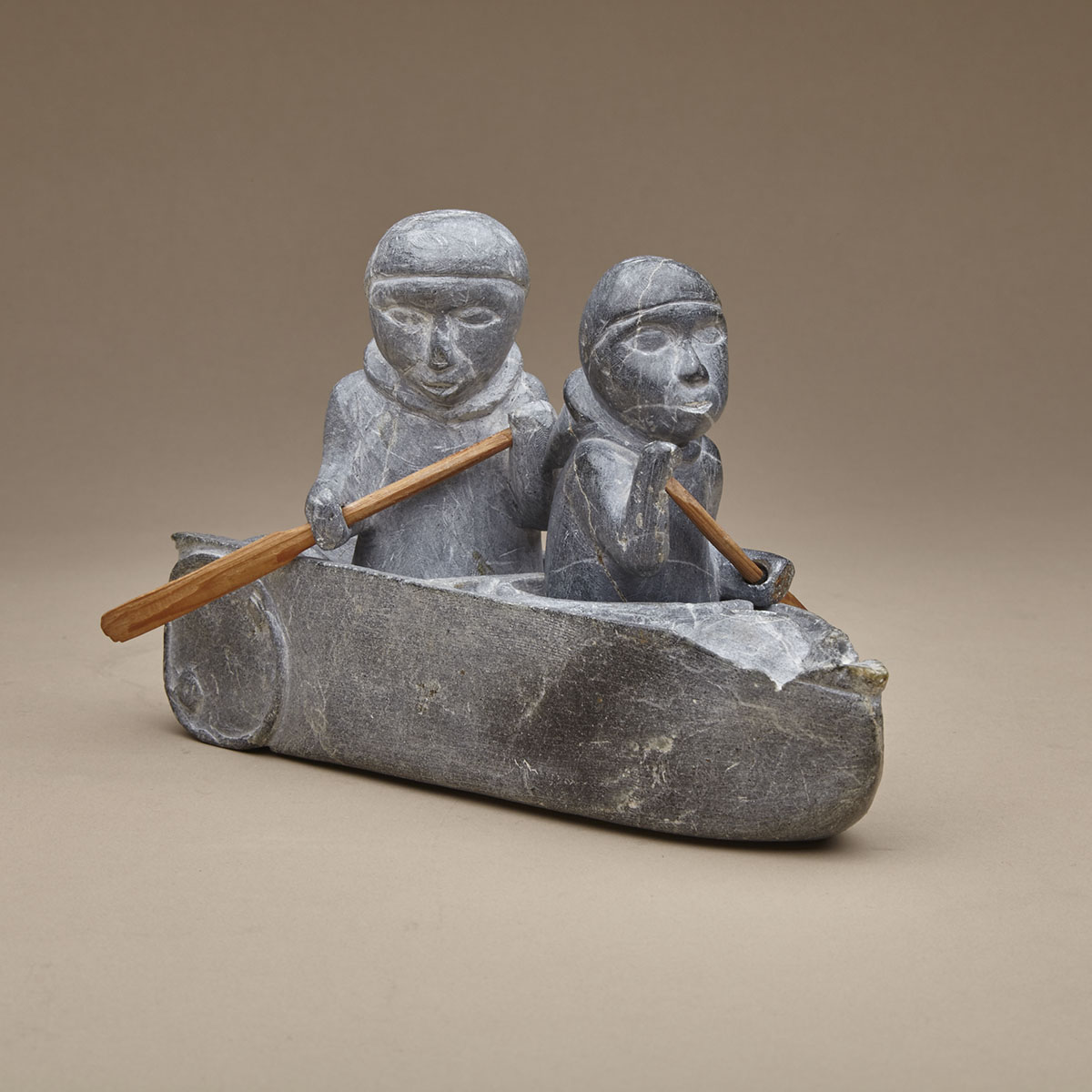 
This lot includes an 8.25” x 11” piece of paper with the illustrated story inscribed in Inuktitut by Talirunili himself. It has been translated below:

“1951 Oct. 15, they died on the way in Ingirravik, the experience was hard to endure. Here they are still traveling en route. In Puvirnirtuq this is happening today traveling by boat in the Inuit way (Traditional way). When we were still in the boat there was, Joe, Joshua and two from Kuugaaluk.
We are en route to the trading post to get supplies- some by walking on the land and whom arrived back.
From Isusivik three men whose names were Qinnnuajuaq, Tuami, and Taivitialuk. From Puvinirtuq we picked up Qingalik the father, Arnaq the mother, their son Juusi, and Aalasi. These four all died.
They were traveling to get supplies from Kangiqsuqjuaq. They had made a turn in this area where death happened. Here they hit a rock, Now it is arduous and they are swimming towards the small island, the sail drowned.
These here are swimming towards the island.
Joe Talirunili: I jotted these down as I am getting ready to leave.
Here is the small island.”

Joe said he wanted to do a better job writing this down, but he said he had to leave (He was in a rush and feels he could have done a better job). At the very bottom of the story he drew a small Island that looks like a circle and beside it he wrote "here is the small Island". Also when he says "these here are swimming towards the Island" he means the two people swimming in the water beside the sail boat (see bottom of the drawing).

This work represents an important piece of Joe Talirunili’s astonishing life story as well as an integral part of his body of work. This unusually expressive little piece is a snapshot in time, much like his famous Migration series. What makes this so special is that Joe had not just one brush with death while traveling by umiak in his lifetime. This boat occupied by Joe and his son was constructed from the wreckage of their boat when it hit a reef. The story depicted here is best described by Joe himself in the following excerpt:

“This sculpture shows how the boat was made, the keg being behind me, Joe, and my son Joshua sitting in the wash tub while the kettle buoyed up the front of our boat. Because of this boat five people were saved though four were lost. Though I grieved for the four that died during their attempts to swim from the reef to the island, some of us who were on that wreck are still alive, though some have died since of sickness. Davidialuk, who had swum to the island, and me, Joe, who constructed the boat, are the only two old people who survived that accident.” The survivors who swam to the island from the reef were picked up once Joe and Joshua reached Kugaluk in their makeshift boat and alerted the Hudson’s Bay Company outpost in Povungnituk.

Collection of a prominent American collector and dealer, CT.