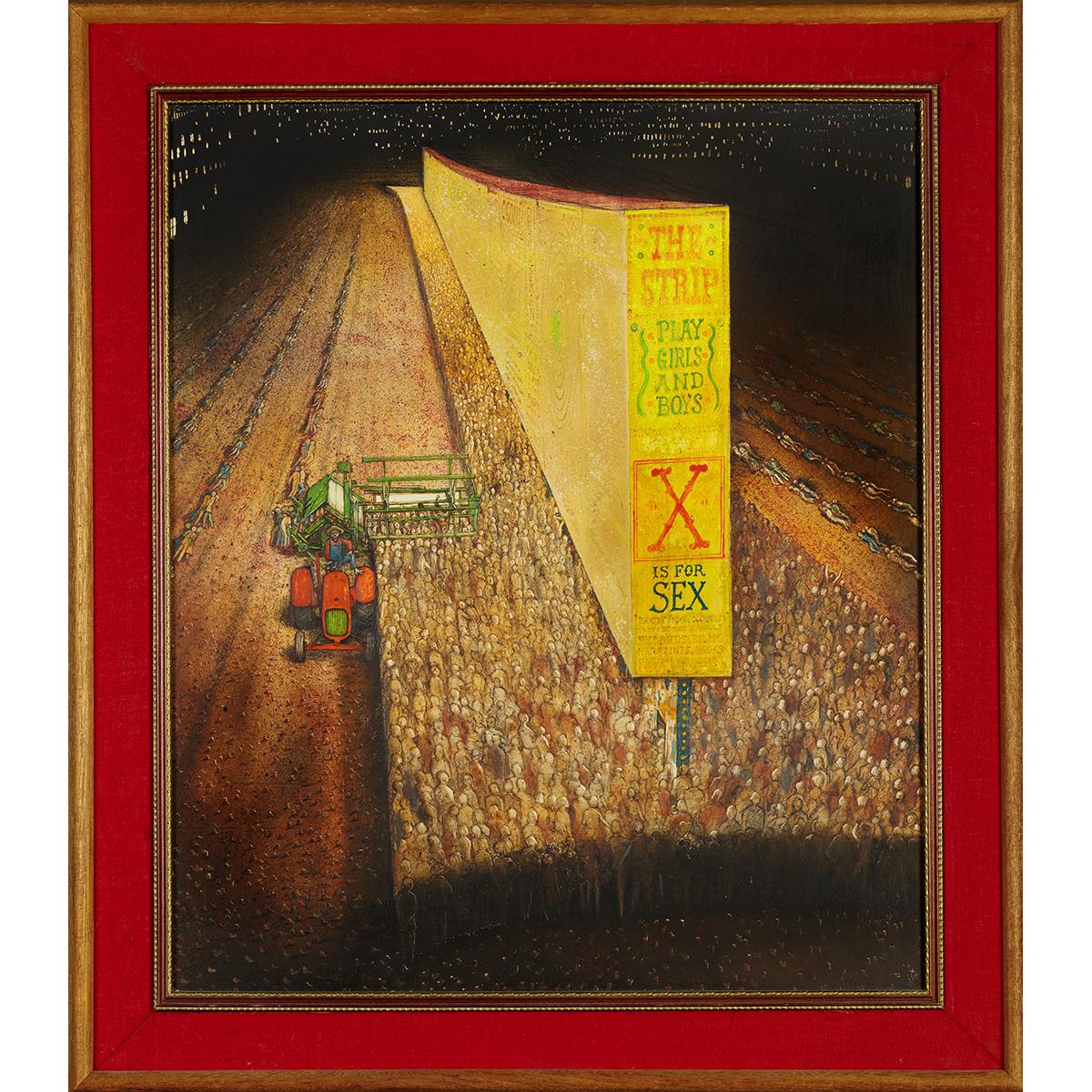 HE GLOATS OVER OUR SCEPTICISM

In a 1975 interview, William Kurelek confirmed that his artwork could be divided into two groups, “socio-religious commentary” and “simply farm painting”, which the artist went further to say, “…could be more broadly expressed by saying it is nostalgic.”

Morley writes that starting in 1963, Kurelek’s “…goal was to alternate pastoral or ‘secular’ series with instructive ones. His dealer [Avrom Isaacs] co-operated by tolerating what could not be discouraged. Together with the texts Bill wrote to go with them, these words express a faith, and his fears for the future of society.” Kurelek wrote that early in his career he “…fretted because I couldn’t paint message paintings only. It wasn’t that I didn’t like doing the farm life ones. It was just that I felt a sense of urgency about the others. I’d discovered after the first two or so exhibits that there were two main streams in my subject matter.” Kurelek grappled with this dilemma, recalling discussing the issue with Avrom Isaacs, Dr. Evan Turner, director of the Montreal Museum of Fine Arts and Helen Cannon, a friend of the artist. Kurelek recounts that Cannon advised the painter to “Do both kind of paintings,” convincing him that “the others are just as important if you want a wide audience.” Later in his autobiography, Kurelek returns to the issue of the dual groupings of his work, illustrating that the advice of Cannon and others was indeed impressionable to his career, the painter stating that in his “didactic or moralizing” paintings, he would “…paint a theme that I strongly feel needs to be made public, and I deliberately use the popularity of my other more pleasant, memory-recording type painting so that I can attract the public.”

William Kurelek: The Toronto Series, the 1972 exhibition at Isaacs Gallery, was the perfect opportunity for the painter to present both nostalgic and message works together to the public. The show included, “…twenty-one paintings, one for each of the main districts of the city.” Kurelek noted that he had “…come to love Toronto and was attempting to portray a new subject, ‘the soul of a city’”. Of the twenty-one works of art, six were didactic, including “He Gloats Over Our Scepticism”.

In “O Toronto”, Kurelek provides his description of “He Gloats Over Our Scepticism”, beginning by saying that the painting may “…look satirical to some, and others may find it ridiculous, maudlin or grotesque. I’ve tried, in [ “The Toronto Series” ], to avoid the self-righteous approach which is so easy to fall into. I deliberately use the personal pronouns ‘we’ and ‘our’, meaning that I can understand mankind’s aberrations even though I don’t agree with them. After all, I am also a member of the fallen mankind and so it is not for me to judge who specifically is a lost soul.”

Kurelek appears almost defensive through this short introduction, clarifying to his audience that he is not preaching “repent and be saved”, but rather attempting to inform and educate through “He Gloats Over Our Scepticism” his message and world view (for an existence which he is clear that he shares with his audience, counting himself as a “member of the fallen mankind”). The artist recognized that if God had wished him to preach his word, “…then He’d not have given me the talent to paint and draw. So all angles considered, it ends up that I’m doing exactly what I am supposed to be doing… It is better to light one candle than to curse the darkness.”

Describing the farmer and his “field” in “He Gloats Over Our Scepticism”, Kurelek informs that, “[T]he pronoun ‘He’ used in the title refers to Satan. At first I visualized him literally making hay, mowing down couples having illicit sexual relations. But then I decided that image would be too pastoral for a series dealing with the city. So when I began to meditate on ‘The Strip’, the part of lower Yonge Street that concentrates on sexual titillation, another, better idea came to mind. The term ‘strip’ is used in farming and lumbering to designate a small parcel of a crop to be harvested by one man.”

The Yonge Street setting is confirmed with the apparent presence of one of the giant circular discs on the left side of “The Strip”, the neon records installed for decades above Sam The Record Man’s flagship store at 347 Yonge Street, beginning in the early 1960s. It is Kurelek’s perceived social scepticism and obliviousness to the existence of God and Satan which he presents as the predominant theme in this painting. “The wandering crowds congregating on the sidewalks of Yonge Street in the evenings appear allegorically like the crop talked of in the Bible. They are ready for harvesting, but alas, in this case, by the wrong person. The devil’s work is a breeze in our times because he is universally regarded as a fairy tale.” Ilse E. Friesen continues the discussion of this theme: “Kurelek combines two disparate images here, that of a crowded city street and that of a harvesting in the fields, in order to dramatize how people can fall prey to the devil. Since his existence is no longer taken seriously, the Evil One is shown to have the opportunity to reap an easy and abundant harvest.”

In a likely attempt to keep his intention and message clear through “He Gloats Over Our Scepticism”, William Kurelek closes his discussion of the painting with: “I should add that each time I do a painting on this subject I also have to make a point of denying that I am a prude. I know that sex is a marvellous creation of God’s and so it is good. It is the misuse and the exploitation of sex that is wrong.”

While there are clear divisions between many of the paintings within the two recognized types of William Kurelek’s work, mainly in the complicated tone and varying brutal depictions observed in his didactic works, this lot stands as a strong example of Kurelek continuing to attempt to bridge the gap between the two categories. With initial introduction to the painting, the viewer is drawn to the general but characteristic features of the composition. The red tractor, green thresher and bright yellow multi-storied “strip” are all housed within Kurelek’s deep red frame, elements which are routinely present in the painter’s nostalgic paintings, and which here pull the finer attention of his audience. Upon closer inspection, the details and, therefore message of the painting emerge. The text of the stacked signs at the end of the strip, the reality of the “crop” being viciously harvested (the thresher leaving behind only the bloodied feet and ankles of its victims) and, finally the identity of the “cocksure” farmer, “…his foot placed flamboyantly on the fender flaunting his mastery of the situation.” These combined intricate details complete the scene and achieve Kurelek’s goal of hooking the viewer and transmitting his message.

In “Someone With Me”, Kurelek commented on the separate existence of his didactic and nostalgic works, saying: “Eventually perhaps two main overall themes will become married, completely merged.” While “He Gloats Over Our Scepticism” plays the role of a didactic work of art, the careful and skilled creation of this painting of colour, detail, perspective and proportion display the incredible talents of William Kurelek as a master painter and a gifted storyteller, displaying the distinctive and crucial elements found in the artist’s most renowned work.