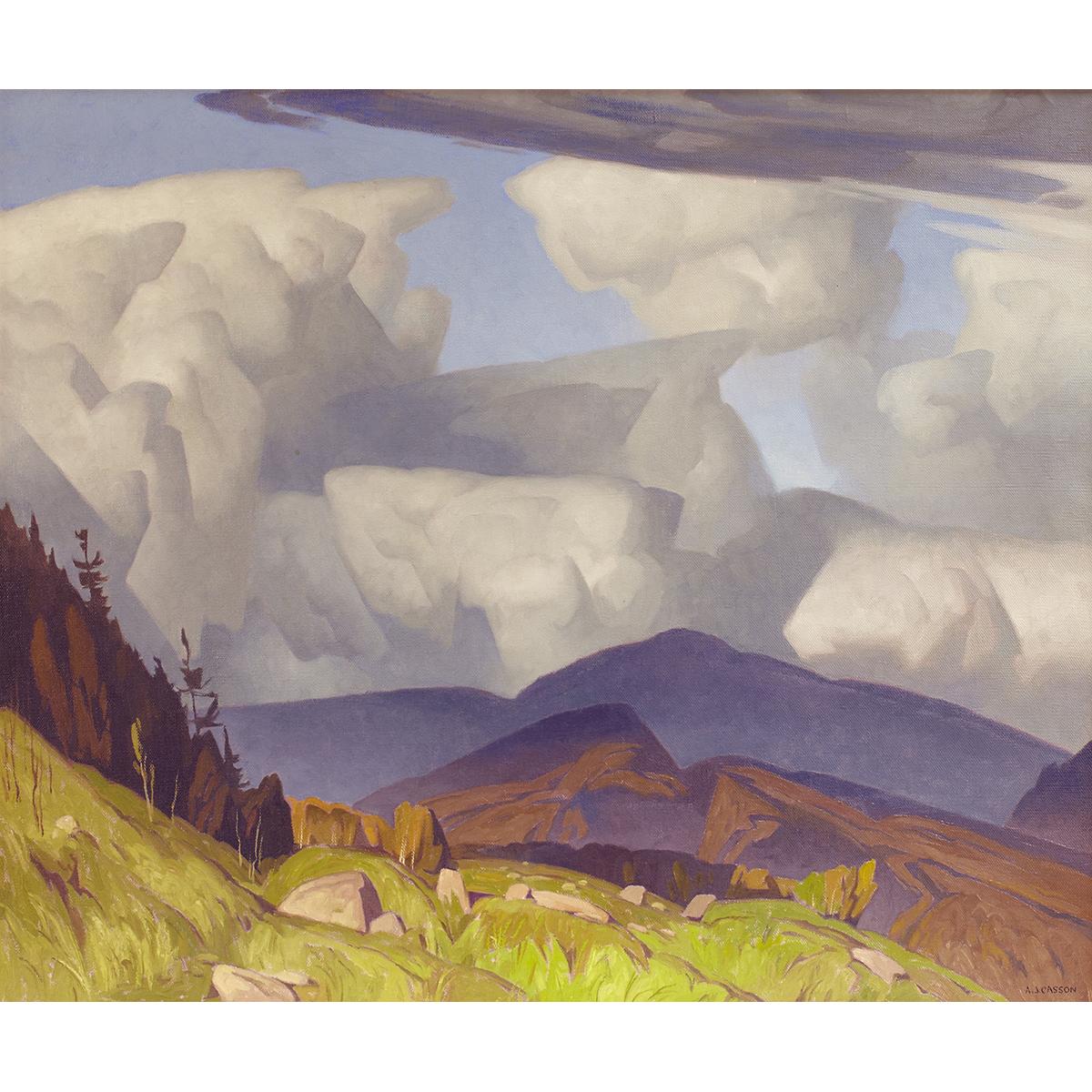 The 1960s found A.J. Casson experiencing a period of professional change. After almost fifty years of working in the commercial art industry and more than thirty years with the firm, in January of 1958 the artist retired from Sampson Matthews, Casson acting as both the Art Director and Vice President of the company during his tenure. Casson’s wish to focus full-time on his painting career had led to the retirement and “for the first time he could lend to his personal art all of the energy which, until then, had been mostly used up by business responsibilities.” It is incredible when one realizes that the recognition and acclaim which Casson had received up to this point was achieved while the Group of Seven painter was employed in a full-time career, leaving the artist essentially weekends and “painting holidays” to reach the artistic strides which he had achieved over the past several decades.

Despite the artist’s existing notoriety in Canada, Casson decided to seek representation from a permanent dealer soon following his retirement. Duval notes: “Until 1958, he had shown and sold his work through art societies and by consignment to various galleries in Toronto and Montreal. Now he felt the need for a stable gallery relationship. He wanted someone to take over the problems of exhibiting and marketing his pictures, removing him from the details which interfered with his creative concentration. After carefully surveying the available galleries, he decided upon Roberts Gallery on Toronto’s Yonge Street.”

It was at Roberts Gallery in March of 1959 that A.J. Casson “enjoyed his first considerable one-man show of his career. In an age when young artists had ten solo exhibitions before they are thirty, it is difficult to grasp the fact of a leading Canadian painter holding his first commercial show when past sixty.” Jack Wildridge of Roberts Gallery displayed his strong feelings regarding Casson’s work, hosting six dedicated exhibitions of Casson’s work between 1959 and 1972, the shows inviting interest in the painter’s work from a “wide new audience. Sales were brisk, and appreciation grew through gallery attendance and mass-media exposure which Casson had never previously enjoyed.”

The important new association with Roberts Gallery and the freedom from his commercial art career led Casson to a period of great production and achievement in the 1960s, the artist finally free to focus solely on his painting.

﻿”Madawaska Valley, October” reveals Casson at his most effective in depicting the Ontario landscape, a detailed and layered terrain falling below a commanding clouded sky. Although Casson only allows roughly one third of his canvas to depict the actual landscape, the richly detailed topography of the region, located in a “long stretch of country between Algonquin Park and Combermere”, is clear and brilliantly composed by the artist. As we move from the immediate foreground of soft greens and rounded rocks, through a cluster of dark green trees clutching the elevated land on the left and a central earthen-toned pointed hill, finally landing on the soft outline of a peaked bluish purple horizon, the viewer is treated to a sliding grade of detail and colour. The sharpness of detail, texture and colour possessed by the vegetation in the immediate foreground relaxes rapidly as we journey into the landscape, finally met with the cool colouring and soft shape of the horizon line.

The calming horizon of “Madawaska Valley, October” is the perfect host to the dramatic sky above, a staple of many of Casson’s most celebrated signature works depicting the Ontario landscape. The soft geometry of the cumulus clouds is highlighted with brilliant tones of greys and whites, the soft blue sky fighting to break through, pushed mostly toward the upper edge of the composition. The immense clouded sky gives the impression of both movement, as the shifting of shapes seemingly occurs before the eyes of the viewer while the wind sculpts the veritable mountainscape of cloud; and power, as the quick-changing sky warns of the potential for the elements to shift just as suddenly.

When viewing their characteristics individually, it is difficult to imagine a composition where the land and sky of this lot do not compete or worse, clash with one another. However, Casson illustrates in this materwork not only his endless understanding and appreciation for the Ontario landscape, but also his ability to perfectly portray the seemingly competing elements, arriving with a mature and powerful work of symmetry and harmony.