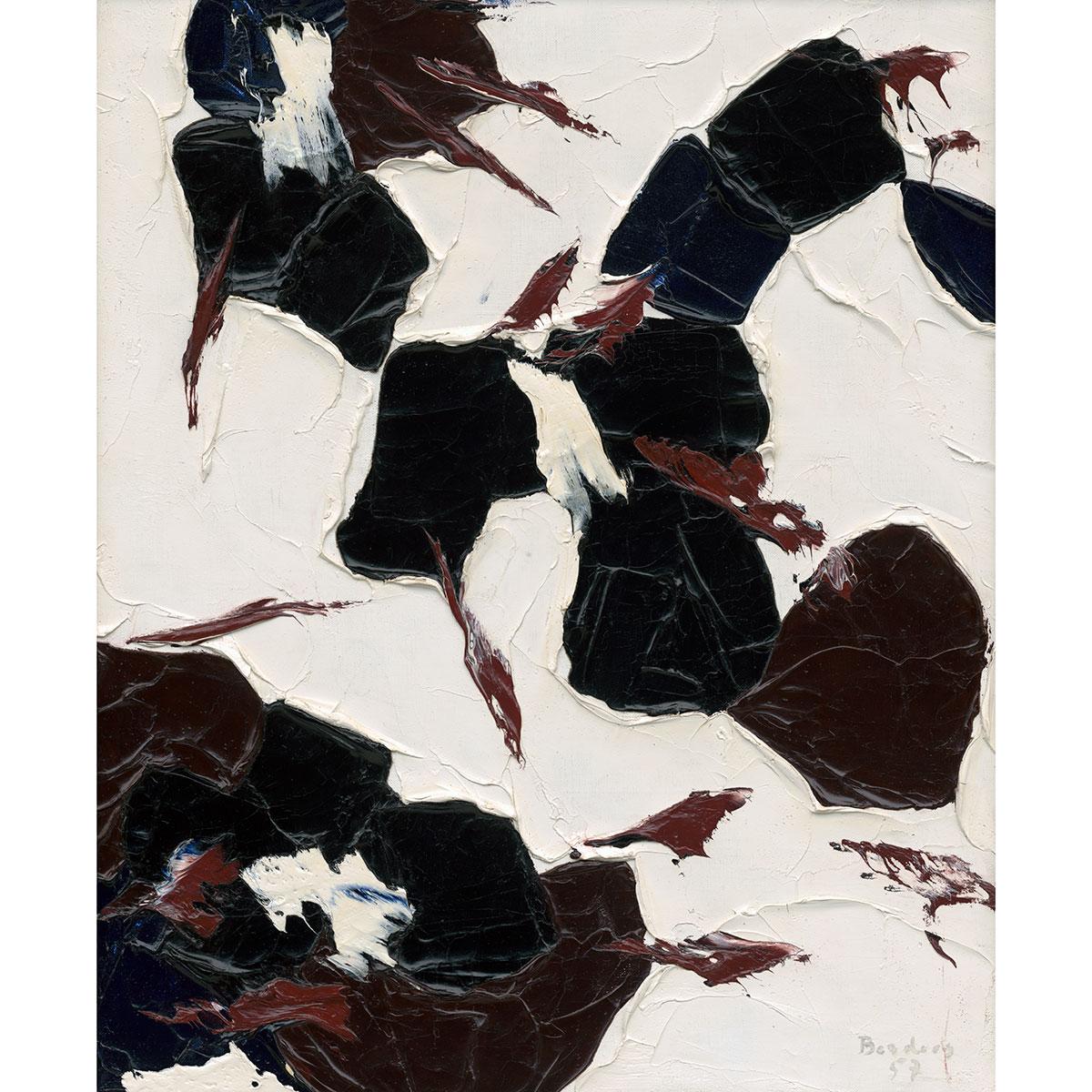 ”Chatterie” came to life during an intense period of work in the artist’s Paris studio. In the spring of 1957, Borduas was given his first solo exhibition at the Martha Jackson Gallery in New York as well as a second at the Gallery of Contemporary Art in Toronto that April.

In this masterwork, the shapes are distributed in a dynamic manner, in what Gagnon has described as “an attempt to suggest movement and rhythm in space.” Rhythm is at the heart of “Chatterie’”; the play of light on the pigments instills the composition with a fantastic sense of vibration. The white “ground” appears to be penetrated by black, deep blue and burgundy amorphous shapes and stained with tachiste red. Borduas wields his palette knife to sculpt marvelous variations in texture, spreading and layering his paint so assertively that, as Nasgaard writes, “the space of the painting seems to occur in that of the viewer”. The intensity and simplicity of “Chatterie” makes the painting one of Borduas’ finest.

Borduas once expressed: “Basically, the element of the world that is for me the most permanent, the only one perhaps, is paint, physical paint, the matiere, the substance. It is my native soil, my land. Without it, I am rootless. With it-whether in Paris or elsewhere, no ﻿matter-I am home.” By 1957, the artist had truly mastered his matiere, producing some of the most majestic and sought-after constructions of his career.

Gagnon notes how Martha Jackson had purchased a large amount of Borduas’ paintings in 1956, however, the following year, she had become far more selective in her choice of works. In July of 1957, she wrote to Borduas from Florence, Italy to reserve three striking canvases: “Bercement Silencieux” (Collection of the Art Gallery of Ontario), “Ardente” (Private Collection) and “Chatterie”. Gagnon lists “Chatterie” as having been sold by Martha Jackson to Blair Laing in March of 1960 and, since then, its location has remained unknown to the public until its inclusion in this auction.

Blair Laing, who sold “Chatterie” to a Toronto collector, described Borduas as “an abstract artist genius,” noting that the “…bold resonant paintings of his final years… severe and powerful as they are, [would] probably remain as Borduas’ most important painting creations.”