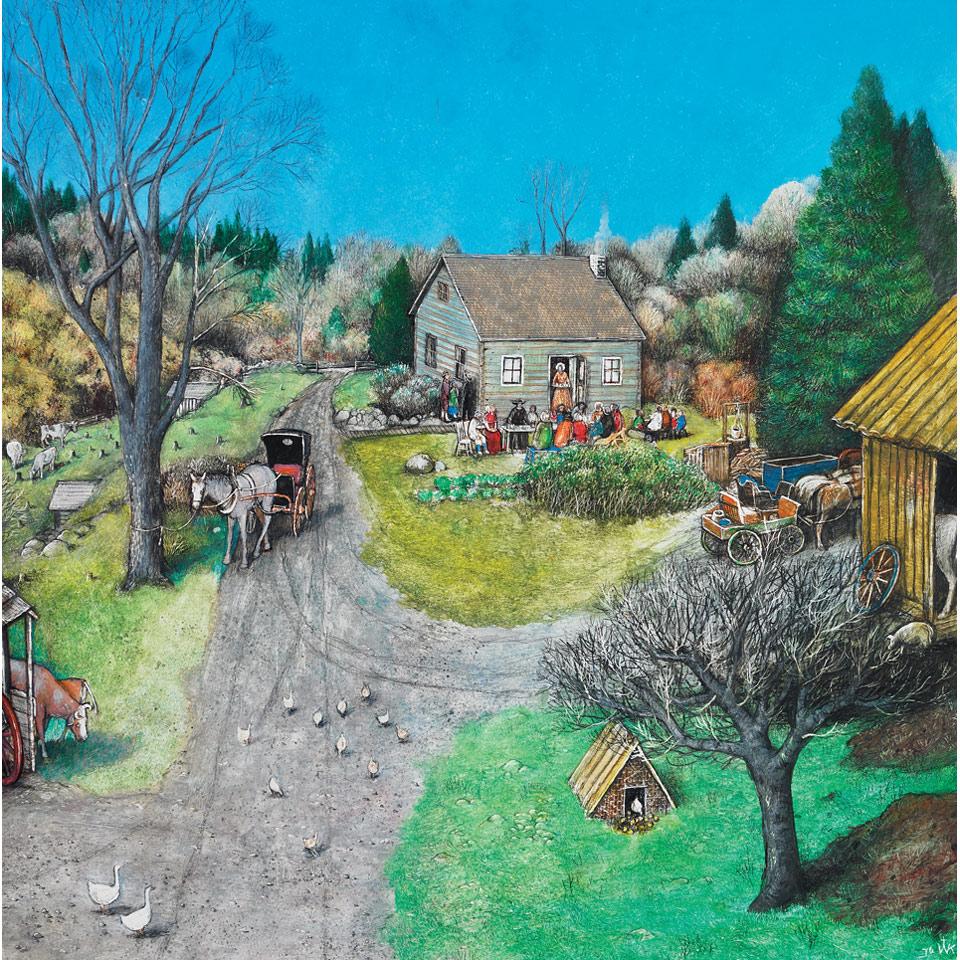 AFTER CHURCH DURING INDIAN SUMMER (THE KAVANAGH HOMESTEAD, BANCROFT)

As witnessed through many of William Kurelek’s most celebrated works of art, “After Church During Indian Summer (The Kavanagh Homestead, Bancroft)” presents multiple strong themes, each very personal to the artist, but also universal, leading the intricately detailed and lively scene to become instantly accessible to a variety of audiences. The themes of culture, community and religion play primary roles within the painting, Kurelek depicting joy and fulfillment in relation to each.

Raised by Ukrainian settlers, William Kurelek spent his life immersed within and fascinated by the experience of the new Canadian. The artist’s childhood on a Manitoba farm bore him witness to the struggles of the new Canadian, striving to create a life of success and opportunity for his/her family. “After Church During Indian Summer” presents a thriving family of new Canadians, their expansive homestead a source of deep pride; the obvious culmination of years of skillful, determined and difficult exertion. The bountiful setting is effectively conveyed to the viewer through Kurelek’s extensive detail: the tree stumps on the left side; the cleared roadway through the centre; the multitude of buildings and sheds constructed throughout; the working well on the right side; and the lush vegetation and toiled land feeding the healthy livestock occupying essentially each corner of the scene contently. Kurelek’s skillful depiction of the homestead provides not only the present successes of the setting, but also the evidence of past and ongoing struggles endured to create the environment, both vital aspects of the life of the settler.

Kurelek’s dedication to depicting the life of the new Canadian is evident throughout his career, including focused books and exhibitions by the artist. Andrew Kear notes that Kurelek “devoted entire series to Ukrainian, Jewish, Polish, Irish, French-Canadian, and Inuit peoples, and had also been planning series about German and Chinese-Canadians before he died.”

The community aspect of “After Church During Indian Summer” plays a central role with family and friends gathered for dinner, “enjoying the last warm days before winter”. This congregation of individuals also plays a cultural role, the discussion at the main table likely touching on former lives in the home countries, as well as the experiences which continue to be encountered in their new home. The shared experiences and challenges discussed during the afternoon point to the crucial role which community plays for the new Canadian. While the conversation at the larger table would steer with regularity to life in the “old country”, the discussion at the smaller “kids table” could be expected to have a stronger footing in the Canadian experience with aspects of their culture playing a minor role. As a first generation Canadian, the inclusion of this smaller grouping of guests is an important one, Kurelek’s experiences of straddling the expectations related to his parents and their heritage with the pressures of social conformity affecting the painter’s point of view early in his life.

In “They Sought A New World,” Kurelek discusses the “comfort of religion” for immigrants, citing that “freedom of religion was the reason many immigrants came to North America”, noting that many of the early settlers to the United States fled their homeland due to religious persecution. Relating religion closely to both culture and community, Kurelek explains that “the immigrant was usually a ‘religious person’ [who] believed he must pass on to his children the beliefs, the rules and comforts he had grown up with.” Religion is represented in this painting by the inclusion of the priest at the main dinner table, likely deliberately visible as the only individual who does not have a guest facing him at the table, ensuring an unobscured view. Indicating the importance of the priest or minister to the new Canadian, Kurelek noted that many groups “brought priests from the homeland to man the pulpits, thereby continuing both their religious and national heritages” and, of importance to this artwork, “[the priest or minister’s] visit to the home of a parishioner honored the house, and if he stayed to partake in a family meal, he made it a feast.”

“After Church During Indian Summer (The Kavanagh Homestead, Bancroft)” presents a joyful and vibrant scene, displaying success and comfort related directly to culture, community and religion. Captured at the moment that the meal is served to the large group of family and friends, “After Church During Indian Summer” is a masterful scene of colour, detail, perspective and proportion, William Kurelek once again matching his skill as a painter with his talents as a storyteller.