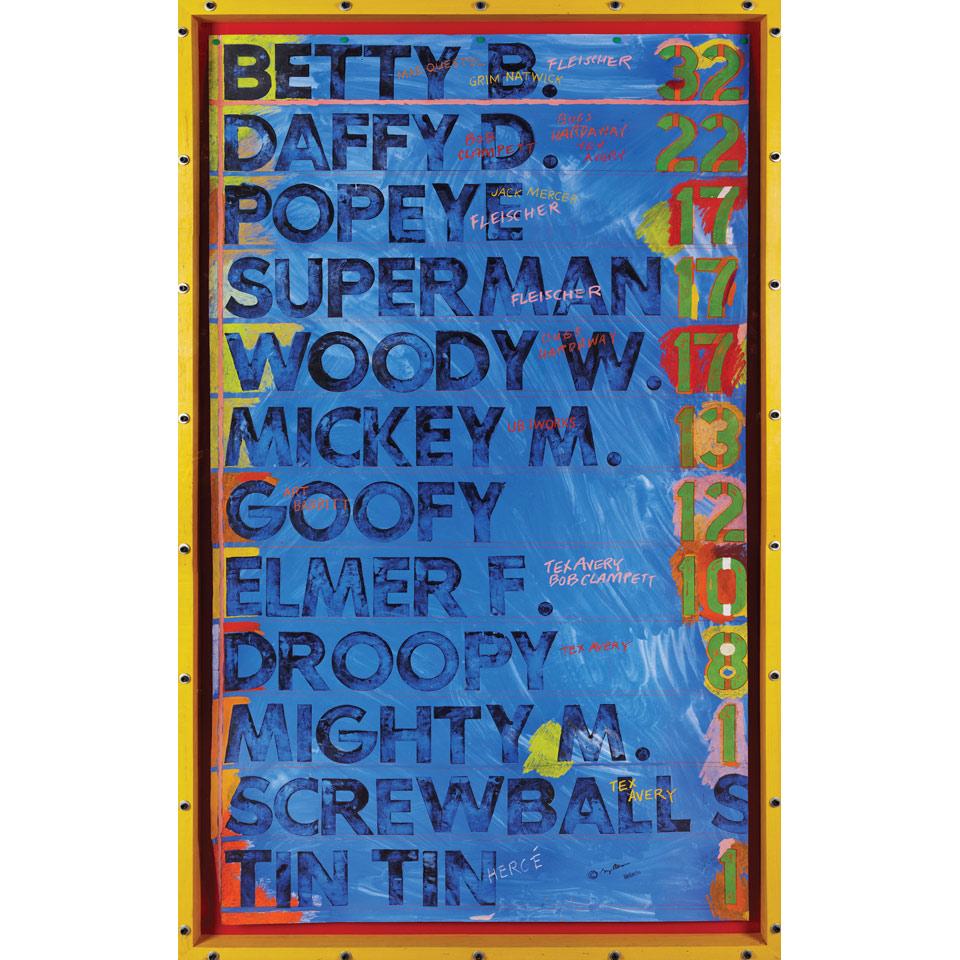 In an article discussing Wynick/Tuck’s exhibition of Curnoe’s work in 1991, Robert Fones describes that in works such as “Dessin Anime”, “the rubber-stamp letters used [are] resurrected from Curnoe’s work of the 1960s, [and] have a close affinity with printing type…Black ink is applied to reversed type and an impression made on paper. As a result, these texts convey literary content more effectively than Curnoe’s painted letter works.” Sarah Milroy also references the artist’s return to large-format stamp works, which were “made with the same custom set he had used in his earlier lettered works for Sao Paulo.” Curnoe had exhibited a fantastic array of lettered canvases at the 1969 X Bienial in Brazil. Milroy notes that in the 1980s “the old magic, it seems, was still in [the stamps].”

“Dessin Anime” is a list of twelve cartoon character names, aligned flush left on thickly painted Harumi paper. Here, Curnoe proves his mastery of media, experimenting with watercolour, stamp pad ink, gouache, pastel and pencil crayon. He uses these media on a grand scale typically reserved for works on canvas. Four dates in 1987 inscribed in pencil suggest that the artist returned to “Dessin Anime” on four separate occasions, reworking his composition. Atop the stamped letters, Curnoe writes the names of animators of each of the cartoons, listing such notables as Herce, Tex Avery and Ub Iwerks (creator of Mickey Mouse). David McFadden recalled that his friend Curnoe, “liked film noir and Louise Brooks and animated cartoons from the forties, particularly Daffy Duck…[Greg] was always making lists…lists of things he liked.” A second work in this series now housed at the Art Gallery of Ontario is “A List of Directors & Dubs” (1987); it includes twelve film director names, many working in the film noir genre. A third work in this series entitled “Before Marks” (1987) lists twelve pigment names, the title referring to the completion of the work before blue paint marks were streaked across the surface of the paper. His list cleverly examines the origins of pigments, with small blue handwritten text that highlights their main ingredients or personal associations for the artist.

Greg Curnoe commented on this 1987 series, noting the viewer’s double process of reading and seeing: “I was brought up on comic books and children books with captions. It was so natural for me to associate type and text with a picture…By using a stamp set of big letters and also by using a sans serif typeface, I have made the text awkward to read...The letter’s stick out, they don’t disappear. It makes you look and read at the same time. You can’t just take it in, partly because the letters are very large…”

“Dessin Anime” underscores Curnoe’s signature translation of the commonplace into the extraordinary. He painted the details of his environment, revealing his personal history and impassioned belief in the inseparability of life and art.