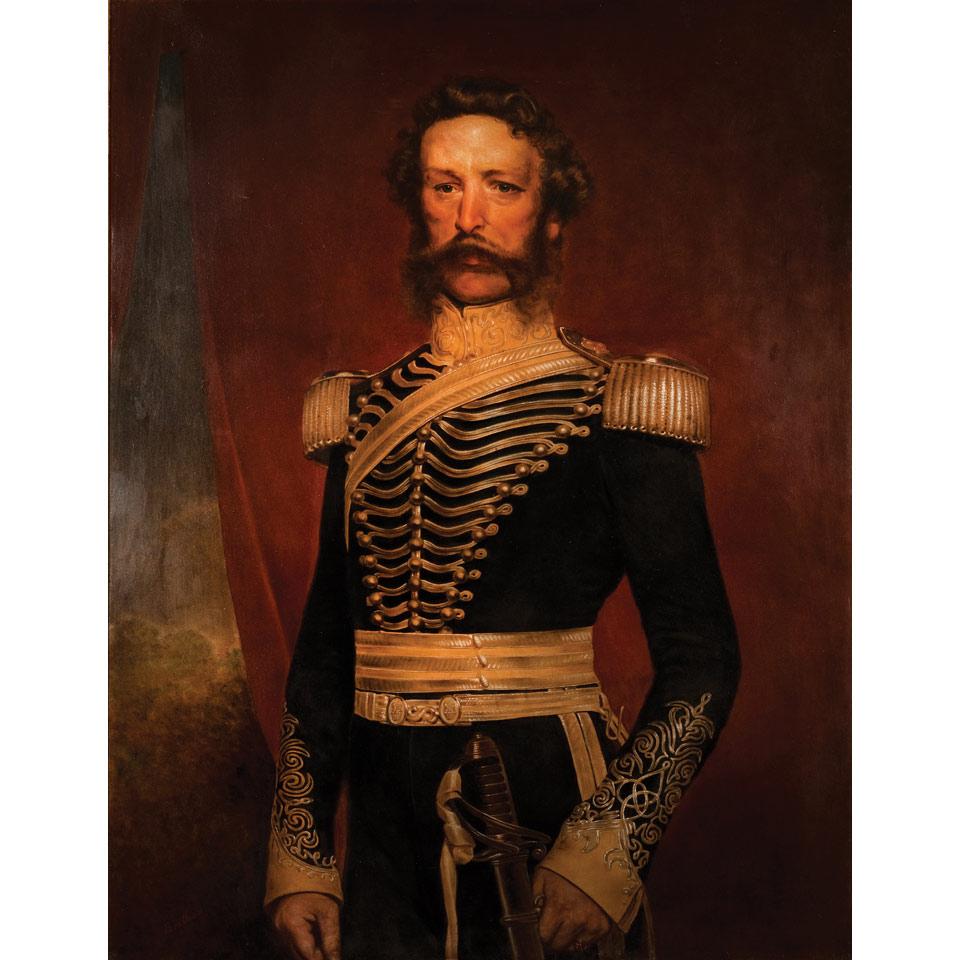 A third-generation Upper Canadian to the manor born, Colonel George Taylor Denison of Rusholme (1816-1873) assumed the family's mantle of success by becoming a prominent Toronto lawyer, landowner, alderman, soldier and entrepreneur. Like his father and grandfather before him, land was the basis of his wealth, his interests ranging from scientific farm production and urban property development, to municipal contracting and expansion of the local militia.

At Rusholme, the mansion he built in West Toronto in 1839, Denison and his wife Mary Anne Dewson led the life of country gentry, raising nine children in privileged surroundings that also became a centre of social life for Toronto's elite and, on occasion, visiting royalty: a Rusholme ball held in September 1860 was in honour of the Prince of Wales, with whom the Denisons' daughter Lilla waltzed the night away.

It was as a soldier, however, that Denison spent a large part of his life. This portrait depicts him in the uniform of his regiment, the York Light Dragoons (now the Governor-General’s Horse Guard), which he was appointed to command in 1846 and whose entire upkeep he funded out his personal fortune. In 1856, Denison formed the Toronto Field Battery and in 1860, the Queen’s Own Rifles. That same year he was appointed Colonel Commandant of Toronto Militia (District 10) and in 1866 commanded the Toronto Garrison during the Fenian Raids.

In this portrait the gilt rank device of a crown is visible on the epaulettes of Denison’s York Light Dragoons uniform, signifying the rank of Lieutenant-Colonel, which he reached in 1853. He would have worn a different uniform after 1856 when he was associated with the Artillery Battery, thus dating the painting circa 1853-56.

Another version of Berthon’s portrait of Denison is in the possession of today's Governor-General’s Horse Guards Armoured Reconnaissance Regiment, a unit appropriately headquartered at the Lieutenant-Colonel George Taylor Denison III Armoury, Toronto.

We would like to thank freelance historian, Jon Reid, for contributing the foregoing essay.