The Cabinet of Curiosities including World History and Culture 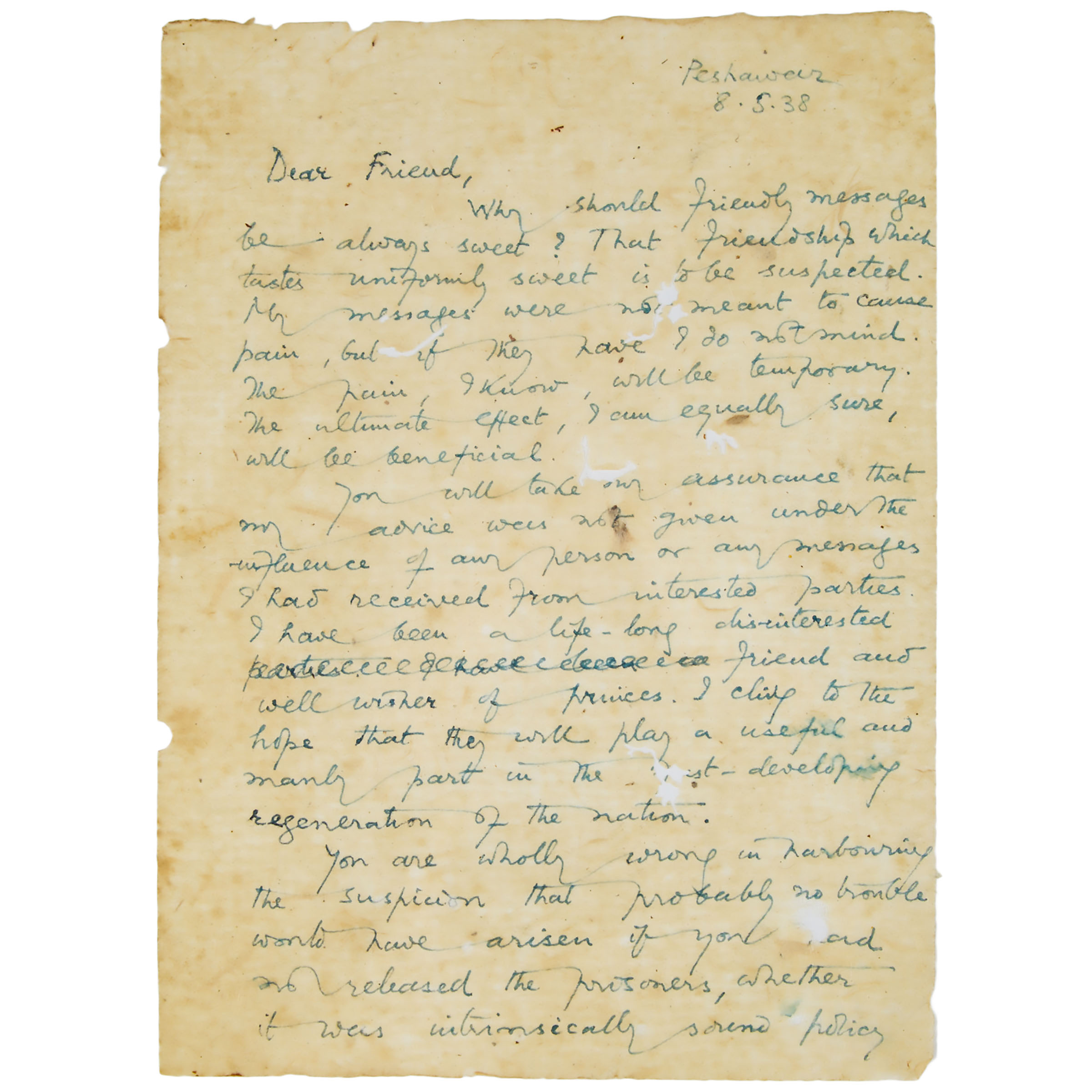 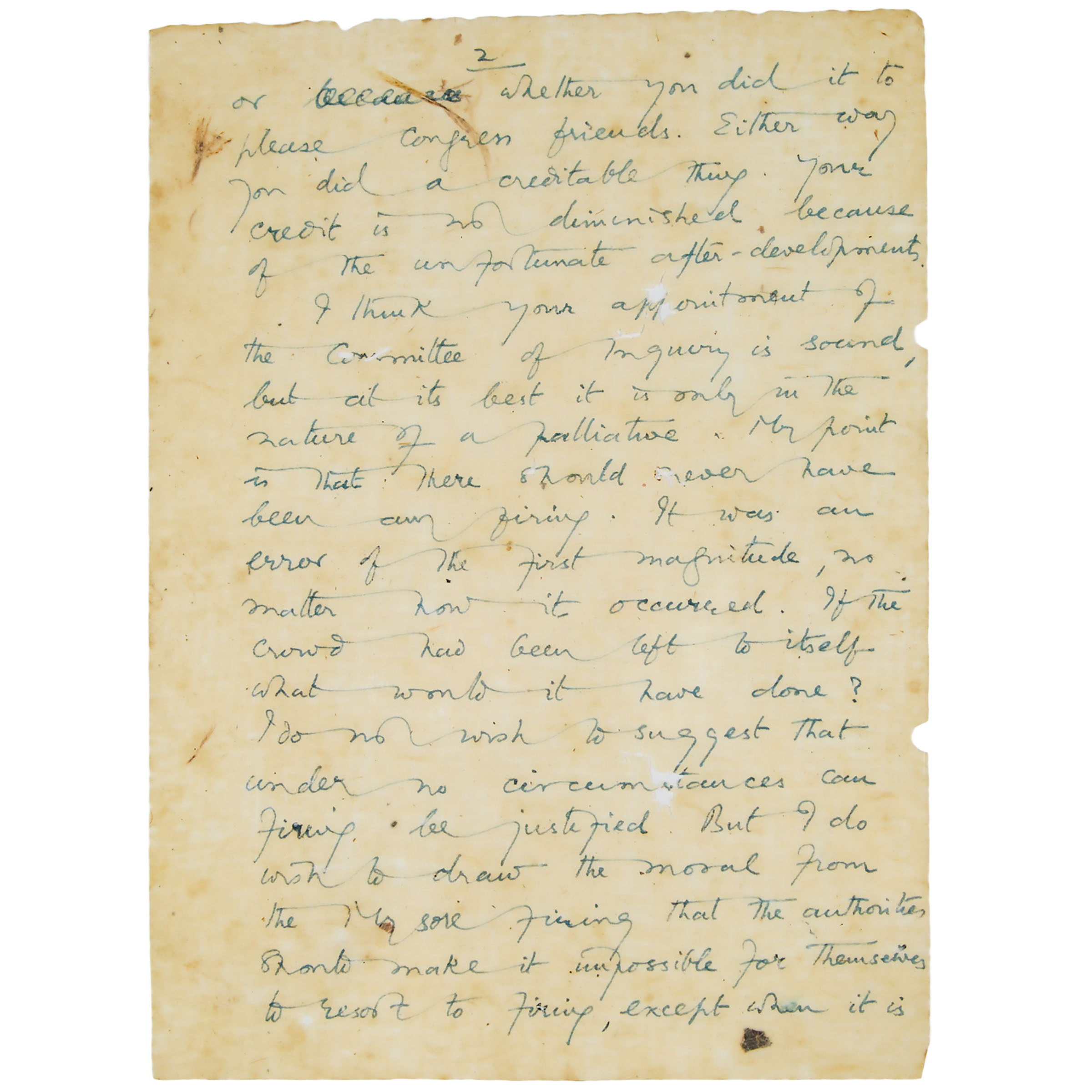 Dear Friend,
Why should friendly messages be always sweet? That friendship which tastes uniformly sweet is to be suspected. My messages were no[t] meant to cause pain, but if they have I do not mind. The pain, I know, will be temporary. The ultimate effect, I am equally sure, will be beneficial.

You will take [o]ur assurance that my advice was not given under the influence of any person or any messages I had received from interested parties. I have been a life-long disinterested friend and well wisher of princes. I cling to the hope that they will play a useful and manly part in the [fa]st-developing regeneration of the nation.

You are wholly wrong in harbouring the suspicion that probably no trouble would have arisen if you [h]ad not released the prisoners, whether it was intrinsically sound policy or whether you did it to please Congress friends. Either way you did a creditable thing. Your credit is not diminished because of the unfortunate after-developments.

I think your a[pp]ointment of the Co[m]mittee of Inquiry is sound, but at its best it is only in the nature of a palliative. My point is that there should [n]ever have been any firing. It was an error of the first magnitude, no matter how it occurred. If the crowd had been left to itself what would it have done? I do not wish to suggest that under no circum[st]ances can firing be justified. But I do wish to draw the moral from the Mysore firing that the authorities should make it impossible for themselves to resort to firing, except when it is at the wish of the people themselves. No evil can possibly befall the State if it refuses to make itself responsible for such acts. Do you not see that it is not a question of the Maharaja or you not having been sympathetic to the legitimate aspirations of the people? I can easily point out many an act of benevolence done under your stewardship. But they are a poor substitute in this age of awakening among the people for their own rule, good or bad.

I suggest that even as you ar[e] responsible to [th]e Maharaja, as your beloved master[,] you are equally responsible, if not more, to the people who are the Maharaja's masters according to Manu Smriti and even according o the tenets of Islam.

Of course you have a conscience as I claim to have for myself and I wont be guilty of asking you for any thing that would be in conflict with your conscience in any shape or form. But my suggestions are in the nature of an appeal to your conscience.

The public statement I made was an imperative call of duty. Time will demonstrate to you the necessity for it. I have not criticised you or the Government in that statement. I have drawn the inevitable moral from the supreme event. I wanted the people not to cast greedy eyes on loaves and fishes but to fix them on the central point.

The privilege of friendship such as yours has come to me as from God. But if it is withdrawn, God will be responsible and not you. But I hope I shall ever remain the same to you as you have known me. Yours Sincerely mKGandhi

The current lot is dated May 8, 1938 and was dictated by Gandhi to Mahadev Desai, another important figure in Indian’s freedom movement, who served as Gandhi’s secretary. It expresses Gandhi’s personal thoughts about a tragic, seminal moment in India’s struggle for independence from British colonialism.

Addressed to Sir Mirza Ismail, who served as the Diwan or Prime Minister of the princely state of Mysore from 1926 to 1941, its contents concern the murder of 32 men and women slaughtered at a peaceful protest (a Satyagraha) in the village of Viduraswatha in the princely state of Mysore in which authorities opened fire on the men and women as they raised the Congress flag (which became the National Flag of India) resulting in these deaths, and wounding of many others.

Vinay Lal, Professor of Indian History at ULCA and a scholar of Gandhi’s life, works and thought for over 35 years states “[In this letter] Gandhi can be seen admonishing the Prime Minister that even though he is loyal to the maharaja (ruler), he is bound by canons of both Hindu law and Islamic law to be loyal to the subjects of the ruler and mindful of the liberties they deserve,”. He also states, “It is a near miracle that a letter such as this one is still in private hands.”

“The letter’s content directly involves three key personalities involved in India’s struggle for independence from British Imperialism: Mohandas Karamchand Gandhi (Mahatma Gandhi), Diwan Sir Mirza Ismail, and Mahadev Desai (Gandhi’s secretary, who was an extremely important figure in this effort in his own right,” said Sean Quinn, senior specialist at Waddington’s. “That the letter is previously undocumented and unpublished ’source’ material makes it very significant in the world of Gandhi historians, and that it is written on handmade paper reinforces Gandhi’s mantra ‘we will make it ourselves’, shunning Imperialist products.

Few inset holes, most prevalent on the first page, diminishing in quantity and size as the pages progress.