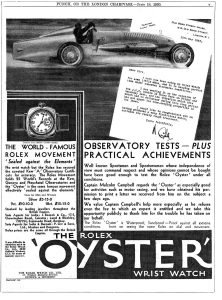 Rolex watches have been linked to stories of great daring, athleticism and courage for over a century–from being on the wrist of Mercedes Gleitze when she became the first British woman to swim across the English Channel–to accompanying Edmund Hillary on his climb to the top of Everest in 1953.

One of the earliest Rolex spokespeople was British driver Sir Malcom Campbell. Campbell is famous for having broken more world land and water speed records than any other person in history—notably breaking the world land speed record 9 times between 1924 and 1936.

THE RISE OF THE WRISTWATCH

Rolex was founded by Hans Wilsdorf and his brother-in-law Alfred Davis in 1905. The company decided to focus on wristwatches over pocket watches—a bold bet considering that “wristlet” watches were at the time seen as a women’s accessory rather than a timepiece for the “serious man.” However, Wilsdorf saw the wristwatch as being well suited to the faster pace of the 20th century. The increasing popularity of athletic pastimes had also caught his notice, and Wilsdorf began imagining a watch that could keep up during strenuous activities, while also being ‘masculine’ and fashionable. He noticed that the wristwatch had to endure much more wear and tear than the pocketwatch, subjected as it was to rain, moisture, dust and being knocked about in the course of a day. He quickly decided that the ideal watch must be waterproof and dustproof, and set about making it.

By 1926, Rolex had unveiled the watch that would establish their reputation: the Oyster. Marketed as the “wonder watch,” the Oyster would be worn by Gleitze during her 1927 swim across the English Channel. When she emerged from her ten-plus hour feat, her Oyster was declared to be in perfect working order. Gleitze would become Rolex’s first spokesperson, the first in a long line of athletes and adventurers. To read more about the history of this famous brand, check out our blog, The Rise of Rolex.

Born in Chislehurst, Kent, England in 1885, Campbell was the only son of a London diamond merchant. Campbell, initially interested in bicycles, would find his way into motorcycle racing, followed by aviation and motor racing. Initially, Campbell nicknamed his cars “The Flapper,” though shifted the sobriquet to “Blue Bird” after attending Maurice Maeterlinck’s play L’Oiseau bleu (The Blue Bird).

Due to his prior aviation experience, Campbell served in the British Royal Air Force during the First World War. After his discharge, Campbell would begin to pursue land speed records—squaring off against a handful of other men in their quest to become the fastest men alive. In 1923, Campbell purchased the 350HP V12 Sunbeam car which had achieved the previous land speed record, driving it to a record-breaking 146.16mph the following year—the first of many records he would shatter.

By the end of 1935, Campbell was able to coax another Blue Bird car up to speeds of 301.1292 mph, the first officially clocked land-vehicle performance exceeding 300 miles per hour. In 1939, he would shatter the world water-speed record, clocking in at 141.74 mph, a record he held for the rest of his life.

Campbell accomplished many of his records wearing a Rolex. The driver famously refused to accept any financial compensation from the brand, preferring to buy his watches out of pocket. Campbell’s likeness was used by Rolex on several occasions, often accompanied by letters he had sent to Rolex headquarters reporting on his watches’ performance. One such ad, ran in June 1930, offers the following:

“I have now been using my Rolex Watch for some little while, and it is keeping perfect time under somewhat strenuous conditions. I was wearing it on the occasion of the J.C.C. Double 12 Hours Race on Friday and Saturday last, and the vibration which this watch had to withstand during this long period has not upset its time-keeping properties in the least. I would like to congratulate you on having produced a very first-class Watch, suitable for really rough treatment.”

Another ad from 1933 notes that Campbell telegraphed Rolex after a race to note: “Rolex watch worn yesterday during driving record attempt and still going splendidly notwithstanding rough usage received.” Campbell’s Rolex proved to consumers that the Oyster was waterproof, dustproof and able to withstand great vibrations—completely sealed against the elements, and able to tackle life’s great adventures. 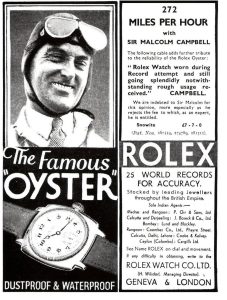 Campbell would be the first of many great racing heroes to partner with Rolex. He famously said that “world’s record speeds are decided by fractions of a second. Tuning a car for a world mark is therefore a battle against time.” What better partner than a world-class watchmaker? Rolex honored Campbell by naming a watch model after him. This was the first time they had done so, and the only instance where they named it after a person who was still living. We are pleased to be offering one of these special watches as lot 5 in our Wrist & Pocket Watches auction.

Online from October 29-November 3, our Wrist & Pocket Watches auction features an array of modern classic and unusual vintage wristwatches. Highlights include a dozen various Rolex from modern Oysters to an early Campbell, plus gold Chanel Mademoiselle, Premiere and Camelia wristwatches, all with their boxes. Other makers include Patek Philippe, Omega, Rado, Piaget, Girard-Perregaux and Baume & Mercier, as well as diving watches by Seiko, Sandoz and Milus. The auction also features a large selection of various pocket watches, both singly and in group lots.