Cupid and Pysche in our Fall 2019 Decorative Arts & Design Auction

Born in Florence, Italy, Cesare Lapini (1848-after 1900) became one of the leading sculptors of his generation producing works in marble including allegorical works, copies after the Antique, genre subjects and portrait busts. He was widely admired for the delicacy refinement and the emotional quality of his work. Lapini created a series of marble groups based on the mythological story of Cupid and Psyche. We were fortunate to offer another example from this series (Psyche and the Butterfly) on behalf of The Art Gallery of Ontario in 2017. 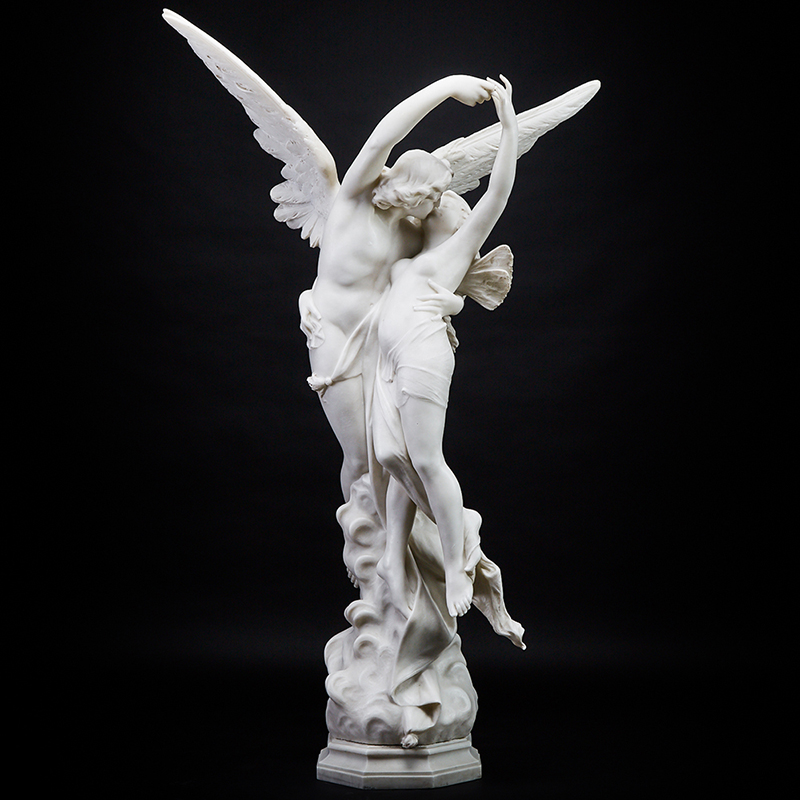 “The mythological tale of Cupid and Psyche is one of the few Greek and Roman myths that has not fully become assimilated into modern consciousness. Though adapted somewhat into the better known “Beauty and the Beast”—first written by French author Jeanne-Marie Leprince de Beaumont as “La Belle et la Bête”—the correlation to the earlier ancient text is relatively unrecognized.

Cupid, known as Eros in Greek, is often still portrayed as a chubby baby cherub with a fondness for arrows, and Psyche is still predominately unknown outside the psychological community –”psyche” means “soul” in ancient Greek and was subsequently utilized in the literature of psychologists. However, in the ancient world, Cupid and Psyche’s love was well documented and appreciated among literary scholars.

Cupid and Psyche’s narrative begins as most modern fairy tales do: with a kingdom, a daughter with an insurmountable burden over her head, a trial, and a subsequent moral. It is as follows: a king and queen give birth to three daughters, but only the third possesses unearthly beauty. Apuleius’ text claimed that her beauty was so astounding the “poverty of language is unable to express its due praise.”

Rumors spread of this girl, Psyche’s, astounding loveliness, eventually reaching the ears of the Roman goddess Venus. Angry that so many mortals were comparing Psyche’s beauty to her own—and in many ways claiming that the mortal surpassed her—Venus called upon her son Cupid to demand that he use one of his arrows of desire to ensure Psyche fall in love with a human monster.

Obedient as always to his mother, Cupid descended to the earthly plane to do as she wished. Yet he was so astonished himself by the mortal princess’s beauty that he mistakenly shot himself. From that moment, Cupid was irrevocably in love with the princess.”

To find out how true love conquers all: Read the Full Article.